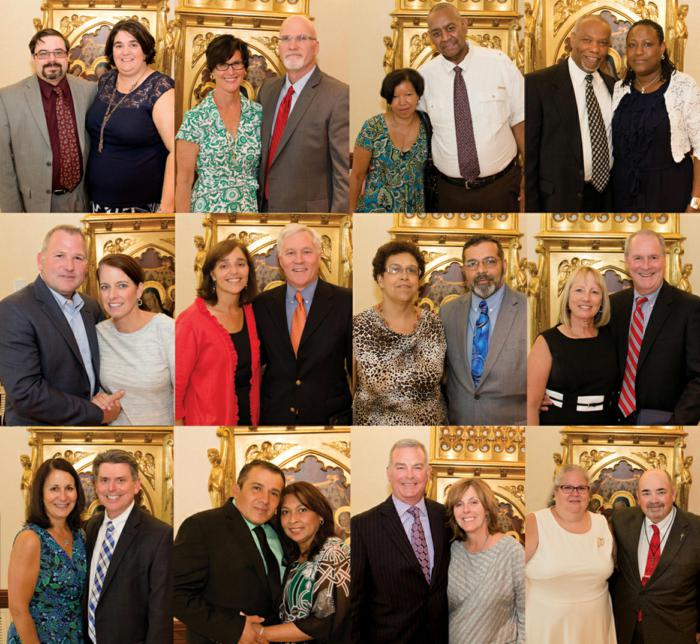 BRAINTREE -- Cardinal Seán P. O'Malley will ordain twelve men to the Order of Permanent Deacon at the Cathedral of the Holy Cross on Oct. 17, 2015 at 10 a.m.

The candidates began their studies in September 2011 when they started attending classes two nights a week. In addition, they met one Saturday a month for formation and made two retreats a year, one with their wives and one together with their class. After ordination, the men have the option to continue their studies at the Theological Institute at St. John's Seminary to complete their master's degree in theology.

As Cardinal O'Malley ordains each of the 12 men through the Sacrament of Holy Orders he will instruct them to, "Receive the Gospel of Christ, whose herald you now are. Believe what you read, teach what you believe, and practice what you teach."

The Permanent Diaconate Program is open to men between the ages of 35 and 60, married or single, who are called to serve as ministers of the Word, of the liturgy and of charity. There are currently over 200 men serving as permanent deacons in the Archdiocese of Boston and over 17,000 men serving across the United States.

In the Boston area, permanent deacons serve as chaplains in hospitals and prisons, in high schools and on college campuses as well as assist at the liturgies in parishes, administer the sacraments of baptism and matrimony and serve in administrative positions in the archdiocese.

The men to be ordained are:

Booker said he applied to the diaconate program after living a Cursillo weekend. On that weekend he was surrounded by priests, deacons, and others closely involved in the diaconate formation process who encouraged him to pursue his calling.

He and his wife met on an Emmaus retreat and the revelation of Jesus' presence in their lives is the foundation of their marriage. Booker relates his calling to the diaconate to the meeting of Jesus on the road to Emmaus. Just as the disciples felt their hearts burning as Jesus walked with them and spoke to them, the Cursillo retreat experience fueled that fire in him as well, he said.

Paul Carroll and his wife Ann are members of St. Theresa Parish in Sherborn. The Carrolls have three children, Jaclyn, Paige and Daniel. He is an attorney working at Fidelity Investments and is also pursuing his Master of Arts in Ministry degree.

Carroll grew up as a member of St. Camillus Parish in Arlington. The couple brought up their children at St. Agnes Parish in Arlington and St. Eulalia Parish in Winchester, before moving to Sherborn and joining the St. Theresa community. Carroll said the primary influence in his journey of faith was -- and continues to be -- his wife Ann. He said he was also strongly influenced, encouraged and inspired by Father John Sassani, MaryAnn McLaughlin, Father John Grimes and Father Paul Ritt.

He explains that, although he did not know it at the time, a very significant step toward his eventual call to the diaconate was living his Cursillo weekend in 2005. Since that weekend he has experienced an ever-increasing desire to share the Good News that is Jesus Christ with those facing emptiness, anxiety or despair.

Carroll shared that, "These four years of formation were an incredible grace-filled journey. The program has allowed me to grow in the knowledge of, and appreciation for, my faith. The opportunity to interact with so many faith-filled and learned individuals who were willing to teach, guide, and simply share their many gifts with the 12 of us in formation was truly a blessing."

Nicolas and Ramona Cruz were married in 1975. They have six boys, Noel, Nicholas Jr., Carlos, Omar, Raul, and Marcos, who were all born in the Bronx and grew up as Yankees fans. The family currently belongs to St. James Church in Haverhill. Nicolas has worked as Spanish teacher, master level clinician, and social worker. Ramona works in the Congregation of the Presentation of Mary in Methuen.

Cruz said that his favorite prayer is The Prayer of St. Francis and that, for him, the four years of formation were a great experience that has changed his life.

Joseph Dorlus and his wife Marie Cecile Widleine are members of St. Angela Merici Parish in Boston. They have two children, Gaelle and Gidley.

Dorlus's career includes positions as an economist and an accountant, as well as time spent working in business administration and also as a pastoral associate.

His faith journey began at Catholic school in St. Marc, Haiti and continued to grow after he and his family joined St. Angela Merici Parish. Dorlus said he understood he was called to the diaconate through discussion he had with his pastor, Father William P. Joy, who approached him more than once to talk about becoming a deacon.

James Kearney and his wife Christine have three children and are members of St. Mary's Parish in Wrentham. He works as a consultant assisting companies in the areas of sales, management and leadership development.

Kearney commented that the four years of formation have been a tremendous gift to him and that he now has a much stronger foundation from which to grow and develop his faith. He said the knowledge that he has gained has drawn him closer to Christ and his Church.

Kelley McCormick, his wife Nancy, and their four children, Kate, Brien, Mike and Mark belong to St. Mary of the Assumption Parish in Dedham. After 20 years of owning and managing a small business, McCormick left the workforce to raise his children.

He said he grew in his faith through participation in his parish and through his friendships with his parish priests including Bishop John Dooher, Father Bill Kelly, Father Matthew Williams, Father William Lohan, Father Paul Sullivan, Father Brian Mahoney, and Father Christopher Hickey.

McCormick commented that he wishes that "there was some way to introduce every Catholic in our archdiocese to the people and the ministries we encountered in our formation that are working every day without fanfare to bring the Gospel of Jesus Christ to the world around them."

His assignment is to St. Mary Parish in Dedham as well as to the archdiocese's Pro-Life Office.

Jonathan Mosley and his wife Julia belong to St. Bernadette Parish in Randolph. They have three children, Justin, Joni, and Jennifer and three grandchildren, Brice, Rose and Frances. Both he and his wife are retired from the Massachusetts State Police.

Mosley's faith journey began at St. Patrick Parish in Roxbury and Deacon John Ego at St. Bernadette Parish helped him discern his vocation to the diaconate. He said he understands his call to the diaconate as a continuation of service for God and the total family of humankind.

His assignment is to St. Mary Parish in Randolph and also to the Office of Diaconal Life and Ministry at the Pastoral Center in Braintree.

John Murray and his wife Elaine are members of the Holy Mothers' Collaborative, which is comprised of St. Mary of the Sacred Heart in Hanover and St. Helen Mother of the Emperor Constantine in Norwell. They have two children, Patrick who is married to Mallory, and Christopher.

Murray retired from the insurance industry in 2013 and said he is looking forward to continuing his faith journey serving the Lord as a deacon. He has been active in the St. Mary Parish community for over 20 years, serving in numerous ministries. It was during this time that he felt the vocational call and, with the help of Father Christopher Hickey and Father Martin Connor, acted on this call and started discernment.

He commented that "The love and support of Elaine, family and friends in the parish community have been instrumental in my journey. The Lord knows us even before we are born. He guides us through the many varied parts of our life with a loving and steady hand."

His assignment is to the Holy Mother Collaborative in Hanover and Norwell and to the Office of Formation for Young Adults.

Charles and Joyce Rossignol belong to Immaculate Conception Parish in Marlborough. They have two children, Christopher and Jacqui. He currently works at Walden Behavioral Care in Waltham.

Rossignol said he considered entering the diaconate when his children were growing up but put off his decision until, in the course of one particular week, three different deacons suggested that he should consider applying for the diaconate. He said the four years of discernment and formation helped him to connect the dots between what he believes, and why he believes it, and that the experience has permeated every aspect of his personal and professional life.

His assignment is to Immaculate Conception Parish in Marlborough and also to the archdiocese's Pro-Life Office.

Jose Torres and his wife Elva are members of St. Benedict Parish in Somerville. They have two children, Jocelyn, a physician's assistant; and Jose Jr., who is a freshman in college. Torres works as a construction equipment mechanic.

Torres said he found spiritual guidance from Father Robert Carr, Father Reynaldo Escobar, Father Oscar Martin, Father Carlos Lopez, and Deacon Marcio Fonseca during his discernment of his vocation to the diaconate. He added that his call to the diaconate began with a desire to help people, especially people from different cultures.

Torres thanks his family for being by his side through this journey and all his friends from St. Benedict Parish and the parishes around Somerville but, he said, most importantly he thanks God for this great gift.

His assignment is to St. Benedict Parish in Somerville and to the Office of Cultural Diversity.

Roger and Maryann Vierra worship at Holy Mothers' Collaborative of St. Mary Church in Hanover and St. Helen Church in Norwell. The Vierras have three daughters, Erin, 24; Darci, 21; and Kristi, 13. Vierra is employed by UBS Financial Services as an institutional consultant.

Vierra grew up in Barrington, R.I. where he and his family attended Holy Angels Church. He said his faith mentors have been his parents and Father Rotundi of Holy Angels Parish.

"My desire to serve as a deacon has been motivated by my close personal relationship with Jesus, which has been nourished through the gift of the Holy Spirit, present to me while I experienced significant health challenges throughout my life," he said.

Vierra is assigned to Holy Mothers' Collaborative which includes St. Mary of the Sacred Heart in Hanover and St. Helen in Norwell and will work in the Office of Campus Ministry.

Thomas Walsh and his wife Elaine attend the Church of St. William in their hometown of Tewksbury. They have three children. Walsh has worked in public special education for more than 37 years and is currently one of the educational team facilitators in the Lawrence public schools. His wife is a school nurse leader in the Tewksbury Public Schools.

Walsh explained that, "My faith journey has been deeply rooted in my work with special needs people. It always given me great satisfaction knowing that in serving (God's) people and that I am doing what he hopes we can all do for others."

His assignment is to St. William Parish in Tewksbury and to the Office of Family Life.