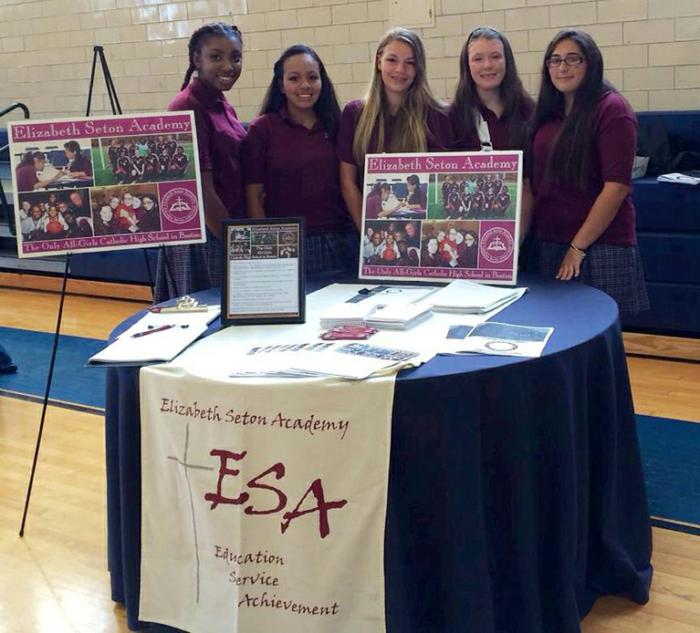 Seven Sisters of Charity-Halifax, daughters of St. Elizabeth Ann Seton, arrived in Boston on Aug. 15, 1887, at the request of the Father Joseph Gallagher, to teach in the newly-constructed St. Patrick School in Boston's Roxbury section. At the outset, there was a strong collaborative spirit between clergy and the congregation.

Father Gallagher's kindness was repeated over and over again by the pastors in the many parishes in which the Sisters served. If the Sisters of Charity have given over 128 years of service in parishes throughout the archdiocese, the archdiocese has given more than that number of its young women to the congregation.

The primary ministry of the first Sisters who came to St. Patrick parish was to instruct young girls. In mid-19th century, St. Patrick's was home to thousands of Irish Catholics who fled the poverty of Ireland only to be confronted by the bigotry of the Know Nothing Party in the United States. However, the hierarchy realized that the future of Catholicism in the country would depend on the education of its young.

Implementing a system of free schooling, such as was inaugurated by Mother Elizabeth Ann Seton in 1808, would add an extra financial burden on already struggling parishes. It is interesting to read the memorandum of agreement drawn up between Father Gallagher and Mother Mary Cleophas, SCH regarding finances: Father Gallagher would provide the Sisters with housing, fuel, water, insurance, necessary repairs and improvements etc. and the superior of the mission was to receive $200 per annum; each teaching sister, $150 yearly. The music teacher would have whatever she earned from pupils.

Collaboration among hierarchy, pastors, and Sisters formed the bedrock of Catholic education in the United States. The Halifax Sisters of Charity take immense joy in the knowledge that we were a part of such an enormous undertaking that brought about such rich results.

Father Gallagher, pastor at St. Patrick, was also instrumental in helping the Sisters acquire their first bit of property in the United States, the Scudder Estate in Wellesley Hills. Here the Sisters built the Academy of the Assumption, a boarding school for young women (1895). The history of that building mirrors the changes that affected the congregation throughout the ensuing years. The Academy of the Assumption is now the Massachusetts Bay Community College. Later, after adjoining property had been acquired, a new structure provided space for the spiritual and educational needs of young Sisters (1967). This building now houses a retirement center for Sisters. From education to formation to health care, the uses of the Wellesley property have changed with the times.

As well as staffing St. Patrick's, where the Sisters of Charity remain to this day, members of the congregation taught at: St. Margaret and St. Peter in Dorchester; St. Peter in Lowell, and St. Patrick in Lawrence. By 1902 there were 2,600 children under our care.

Then came the dizzying changes of the 1960s and 1970s. Youth revolted, championing freedom from convention in sexual mores, politics, dress and music. Whereas in previous decades, the Sisters were counselled to "make our schools and academies rank among the best," in the last three decades of the 20th century, the Sisters of Charity were challenged to "show forth God's love" and to "heal the pain in the world."

That pain is assuaged by focusing on teaching the poorest of the poor -- those who lack an education. Our education ministry today continues at WAITT House, Roxbury (We Are In This Together), where Sisters enable men and women to complete high school equivalency tests and to prepare for citizenship.

In Lawrence, in the 1980s, the needs of the Southeast Asian immigrants attracted the Sisters' attention. As well as the adult education, this program has an added social dimension.

In the 1990s, with the closing of Msgr. Ryan Memorial High School, Sisters worked with alumnae to create the last all-girls high school in the city of Boston: Elizabeth Seton Academy.

Although today some Sisters are still engaged full-time in social work and in education, the majority of active but aging Sisters are volunteers, teaching immigrants in Roslindale, Roxbury, Dorchester and now in Wellesley, where the One Small Step program has been launched.

Sisters are also involved in pastoral ministries and care for the sick and elderly -- ministries that were dear to the heart of Saints Vincent de Paul and Elizabeth Ann Seton. Marillac Residence and Elizabeth Seton Residence at Mount St. Vincent Wellesley -- both licensed facilities -- have welcomed members of the Religious of Jesus and Mary, Marist Sisters, along with Sisters of Charity, and offer care in newly-renovated facilities.

Christ's call to respond to love of neighbor continues to give Sisters insights about new issues like human trafficking. Sisters of Charity joined with several other congregations to provide a local safe house for those who have been trafficked. Together with the men and women in our Associates program, Sisters have been involved in caring for the planet and have supported water projects in Peru and the Dominican Republic.

St. Elizabeth Ann Seton would be pleased with her daughters who live her legacy in the Archdiocese of Boston.

Sister Martha Westwater, SC is a member of the Sisters of Charity of Halifax who lives in Wellesley and is a volunteer in several community related projects of her congregation.