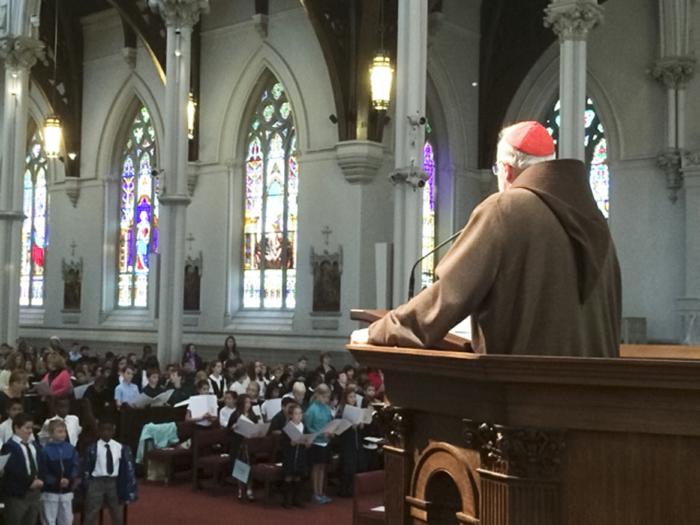 'That afternoon, I stopped by to greet the nearly 500 schoolchildren participating in the Children's Eucharistic Holy Hour sponsored by the World Apostolate of Fatima.' Pilot photo/CardinalSeansBlog.org

That afternoon, I stopped by to greet the nearly 500 schoolchildren participating in the Children's Eucharistic Holy Hour sponsored by the World Apostolate of Fatima. They hold this event every year in our cathedral and every year the numbers are growing. Father Ed Riley was the main celebrant for the gathering and I was very glad I had the opportunity to speak to these young children about the importance of prayer in their lives and of eucharistic devotion.

On Saturday (10/3), I presided at the investiture of four new novices of the Daughters of Mary of Nazareth. It was a beautiful celebration at Sacred Heart Church in Newton. We were very happy to be joined by the pastor of Sacred Heart, Father John Sassani, along with a number of other priests, relatives of the sisters and friends of the community. Since the Sisters have moved to Quincy, it was also something of a farewell for the community.

...I went to St. Lorenzo's Friary in Jamaica Plain for celebration and recalling the death of St. Francis, called the Transitus, in which we recite the same prayers that he recited and read from the Scriptures and the account of his death by St. Bonaventure. ("Transitus" is Latin for "passage" and refers to the passage from life to death.) Francis died at the church of San Damiano, where he began his vocation and where the order still honors his memory, particularly on his feast day and at the Transitus. I try to join the celebration every year, which is one that is repeated in the different Franciscan houses, chapels and churches throughout the world.

On Monday (10/5) I visited Mount Alvernia Academy. I had been scheduled to say the Mass there in honor of St. Francis, because the Franciscan Sisters were the founders of that school. (Of course, Mount Alvernia is a Franciscan name, it is where St. Francis received the stigmata.) But the timing was very providential because it gave me the opportunity to be able to congratulate them on being named as one of the few schools in New England to receive a Blue Ribbon designation for excellence by the Department of Education. They are justifiably proud. Mount Alvernia was one of only five schools in Massachusetts -- and the only private school in the whole Northeast -- to receive this designation.

Tuesday (10/6) before my departure for Rome for meetings with the Holy Father, I gave opening remarks to a meeting of our Pastoral Center staff on the importance of our pastoral plan, Disciples in Mission. At this point, a number of parishes have been developing their local pastoral plans, which are a very essential part of the process of renewal and revitalization of parish life, with a commitment to reach out to different demographics who have drifted away from the practice of the faith. It is also a commitment to work for vocations in a strategy to be able to encourage vocations in our parishes. I wanted to encourage our staff to prepare for the Year of Mercy and to continue their outreach to the parishes. We are trying to promote that culture of service to help our parishes, in particular those parishes that are going through the challenge of forming collaboratives and setting goals and priorities for evangelization.