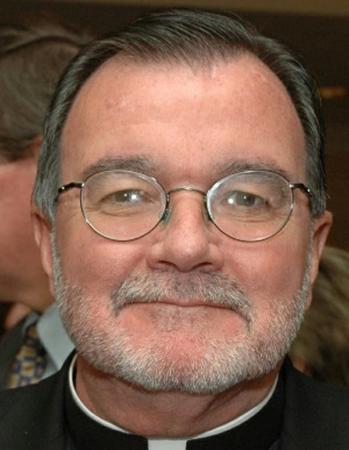 Pope Francis has named a native son of the archdiocese to be auxiliary bishop of the diocese of Chosica in Peru; at the same time he named Dorchester born (Nov. 8, 1946) Father Arthur Joseph Colgan, CSC as titular bishop of Ampora.

The bishop-elect grew up in Stoughton and is an alumnus of Boston College High School and Stonehill College in North Easton. His mother Marie lives in an extended care facility in Plymouth. Nearby are three of the bishop-elect's four sisters; another of his sisters lives in Florida.

Longtime friend and fellow Holy Cross Father Jim Chichetto, CSC spoke glowingly of the bishop-elect. "He loved Stonehill from the time he was a kid; growing up in Stoughton he was only a bike ride from the campus." After graduation from Stonehill in 1968, he entered the Congregation of the Holy Cross. His solemn profession was Aug. 11, 1971 and just a bit more than two years later he was ordained to the priesthood, Oct. 27, 1973. His theological studies in preparation for ordination were at the Catholic University of Chile in Santiago. Stonehill named him an Outstanding Alumnus in 1992.

Save for a nine year break (2000-2009), when he was provincial of the then Eastern Province with offices in Bridgeport, Conn., he has spent his entire priestly life in Peru. His ministry there has included leadership positions in the Congregation of the Holy Cross, the Peruvian Episcopal Conference as well as in the archdiocese of Lima, the dioceses of Chimbote and Chosica.

He was pastor of El Senor de la Esperanza (Lord of Hope) parish in Canto Grande -- a parish that serves 200,000 people in 19 churches and chapels. The diocese has a million and a half Catholics, almost as many as the archdiocese; it is however much more compact, only 195 square miles or one tenth the geographical area of Boston.

Speaking further of his friend, Father Chichetto said "He's just the kind of priest who will make a good bishop -- he's very smart; he's an amazingly good listener; and he is a man of extraordinary compassion."

The bishop-elect has been vicar general of the Chosica diocese since 2010. He is to be ordained bishop at the Catedral San Andres de Huaycan on Dec. 12, the Feast of Our Lady of Guadalupe.