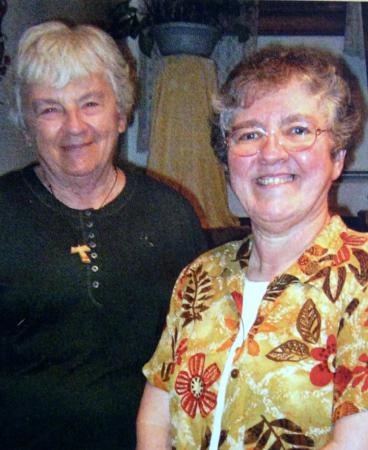 Sisters Kenan Rebholz and Linda Greenwood founded the San Damiano House of Prayer. They mentor and teach people to be spiritual directors. They gather regularly for prayer and reflection with thirteen Associates of their Franciscan congregation in the Lowell area. Photo courtesy/Sisters of St. Francis of Assisi

We are the Sisters of St. Francis of Assisi with our Motherhouse in Milwaukee, Wis., on the shore of Lake Michigan. Our Mission is to further the coming of the reign of God as we live the Gospel. We serve the people of God, bringing the healing, teaching, reconciling and liberating power of Jesus into human situations often in solidarity with people in need through the work of justice and peace.

Our congregation was founded in 1849, by six Bavarian women, the first women to found a new order of Franciscan Sisters in America. Our history is complex. Amid rumors of war in Europe, the original group of Third Order Franciscan lay men and women, from Assumption Parish in Ettenbeuren, Bavaria, now Germany, aspired to bring the Gospel and the spirit of St. Francis of Assisi to America. Our sisters could not foresee: the departure of the first six women foundresses, an early division in the congregation, the changing times of the Second Vatican Council and the merger of another congregation with theirs. Out of all these changes there emerged two additional congregations. After 150 years we celebrated our common history and reconciliation with them. To further celebrate together we adopted an order of African Franciscan sisters from Cameroon, Africa. We work with them, responding to their request for further education. God's surprising ways through hardship, division, and service to thousands of people in need have led us to amazing growth, powerful stories of faith and service to the church over the last 166 years.

In 1947 our sisters arrived in Massachusetts at the invitation of then Archbishop Richard J. Cushing who expressed deep interest in starting a school for children with developmental disabilities. We had already established St. Coletta School for Exceptional Children in Jefferson, Wisconsin. In 1947 what would later be named the Cardinal Cushing Center was established in Hanover. At the onset, the legal name for the corporation was St. Coletta by the Sea. Applications for the school were overwhelming. In 1948 Archbishop Cushing gave our sisters the Pennock Estate located in Braintree. It became the temporary residence of 15 adolescent boys. In 1957 it opened its doors as Braintree St. Coletta Day School. In 1984 the Cardinal Cushing School Training Center and Adult Services and Braintree St. Coletta Day School merged and became the St. Coletta and Cardinal Cushing Schools of Massachusetts. A total of 146 of our sisters have served at these two schools. Another enterprise of the sisters was The Archbishop Cushing Reading Clinic of Boston (1951-1967).

Presently five of our sisters are in Massachusetts: Sister Kathleen Denevan, OSF resides in Millis and serves as a chaplain in the Norfolk Prison( since 1991). Sister Kenan Rebholz, OSF serves at the ARC of Greater Lowell (since 1988). Sister Linda Greenwood, OSF a native of Lowell serves at St. Patrick Church of Lowell (since 2002). Sisters Kenan and Linda began the San Damiano House of Prayer in Lowell (2000-2015). They offer professional training and certification in spiritual direction and mentor 13 Associates of our congregation. Sister Mildred Rothwell, OSF serves in Wilmington as a spiritual director, a memory care assistant and bible study leader. Sister Eleanor Riordon, OSF serves in Hanover on committees, driving for Cushing residents and offering faith sharing.

In addition to these ministries our sisters have served in Massachusetts in multiple professions from the 1970s to 2006 in: Boston, Bridgewater, Dover, Norwell, Quincy, Tyngsborough, and Wilmington.

God is doing something new in us! As our sisters decline in numbers we are blessed and exceedingly joyful to sponsor the corporations we began and place them into the hands of competent and inspiring lay men and women. We gather with them annually to share the spirit of the Gospel and the inspiration of St. Francis and St. Clare of Assisi. God has begun a great work in us and is continuing it with the skill and dedication of these capable people. Our sisters welcome new members, volunteers and lay associates as the Holy Spirit calls men and women to live the Gospel with us and serve those in need. Website/Facebook: www.lakeosfs.org Link to same: www.lakeosfs.weebly.com.

Sister Adele Thibaudeau, OSF is the Director of the Office of Franciscan Call and Response for the Sisters of St. Francis of Assisi. She has served as an educator, campus minister and vocation director for many years in the Milwaukee, Minnesota and Chicago areas. (414-744-1160; athibaudeau@lakeosfs.org)