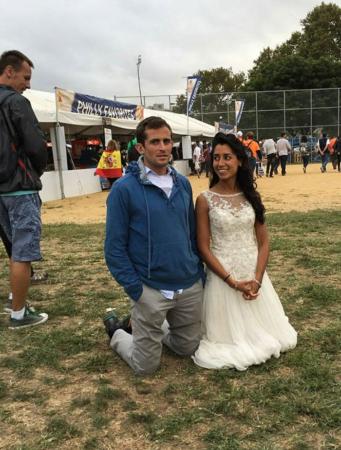 PHILADELPHIA -- Many Boston Catholics were among the thousands who travelled to Philadelphia Sept. 26 and 27 to be together with Pope Francis.

The pontiff held a morning Mass on the first day of his visit followed by a talk at Independence Hall, where the Declaration of Independence and the Constitution were signed.

While the pope gave a talk in the same square as the drafters of the Declaration of Independence read the document aloud in 1776, Boston pilgrims joined the crowds at the Benjamin Franklin Parkway for the Festival of Families.

Peter Buckley traveled to Philadelphia with his children and his wife Emilia for the Festival of Families and to celebrate a special occasion in his family. Ana Hayneie, the couple's eldest daughter, was expecting the arrival of her first baby.

"She's our oldest and it's a great opportunity, because this will be our first grandchild. We figured what better way to come and celebrate it with her than to potentially get a papal blessing for her new baby," Buckley said.

Danielle LaPointe, 28, a parishioner of St. Clement's in Boston, travelled to Philadelphia with a group of friends and said she felt a sense of unity with other Boston Catholics and Catholics at the event.

The next day Pope Francis celebrated a Mass in the same location for thousands of gathered Catholics.

Maria Vercollone, 27, attended the papal Mass with her new husband Anthony Vercollone. The couple married earlier this month and hoped to see Pope Francis up close. Knowing that the pope sometimes blesses newlywed couples at papal audiences, she wore her wedding dress to the Mass to attract the pope's attention.

The couple did not get close enough for a blessing from the pope, but Vercollone said the mannerisms and way of speaking of Pope Francis moved her because it reminds her of her grandfather in Columbia.

"All that the pope said yesterday and today really touched my heart deeply and it was such a blessing to be in his presence," she said.

She said just being there felt like a true blessing.