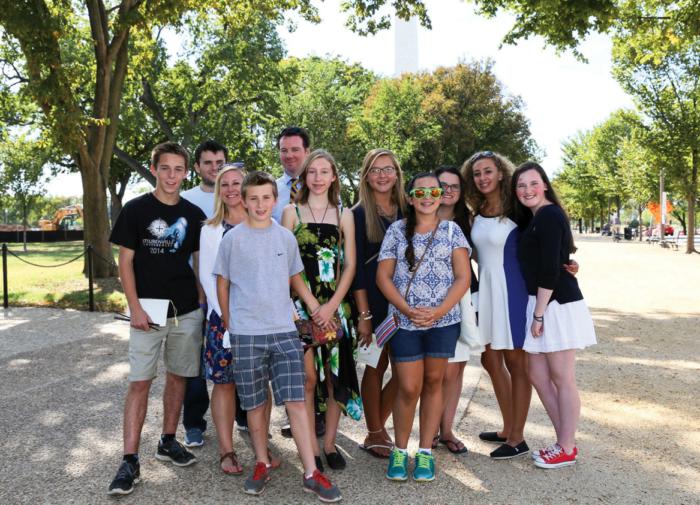 Students and chaperones from Archbishop Williams High School in Braintree who witnessed the pope's addresses at the White House and to Congress are pictured on the National Mall in Washington Sept. 23. Pilot photo/Gregory L. Tracy

WASHINGTON, D.C. -- Many Americans were fascinated watching television coverage of Pope Francis's historic visits to the White House and Congress last week, but eight students and two adult chaperones from Archbishop Williams High School in Braintree were among the select few who got to experience both events first-hand.

The trip came about thanks to Archbishop Williams theology teacher Angela Lawlor, who contacted Massachusetts Senator Elizabeth Warren and asked her for tickets to Pope Francis' address at the Capitol Building.

"When the Vatican announced last year that the pope would be visiting the U.S.A., we all knew that this would be an opportunity for our students to connect with their faith and religion at a new level," explained Lawlor. "This dream has become a reality thanks to Senator Warren. Our students now have the opportunity not only to attend such a historic event, but also to participate in something that very few American Catholics have ever experienced, a papal address."

The students boarded a train Tuesday Sept. 22 and arrived in Maryland early the next morning, where they were greeted with yet another surprise.

According to Meaghan Roach, a social studies teacher at the school and one of the trip's chaperones, one of the students' relatives who works in the White House had arranged for the group to also attend Pope Francis's address on the White House lawn that morning.

Speaking to The Pilot on the National Mall in Washington Sept. 23 following the White House event, the group described their experience of the trip.

"This entire experience has been a series of little miracles," said Roach. "The whole trip was a surprise -- getting the tickets to Congress first, then we found out we were going to the White House. And then, the pope drove by us not 10 feet away from us -- so you can just imagine."

Roach explained that the eight students who went on the trip were chosen based on an essay contest in which each student was asked to describe what attending this event would mean for them.

"Once I come home I want to help spread and implement the pope's messages and plans," wrote eighth-grader Sallyrose Savage. The 13-year-old Weymouth resident was the youngest AWHS student to make the trip.

Savage said she was humbled by what she heard at the White House event. "It was this feeling that came upon me that (the pope) was really here and we were really experiencing something so real that so few Catholics ever get to experience."

Echoing the sentiment, 15-year-old Alana Liriano, a freshman from Weymouth, said, "It was really cool being so close to the president and the pope and getting to hear what they had to say."

Jaclyn McEachern, a junior from Quincy, said she was "very caught up in the moment" and was very appreciative to have had the opportunity to travel to Washington with her school. "I think (Pope Francis) is listening more to the problems the whole world faces -- like the environment."

Many of the students said the pope's comments on the environment resonated most with them.

"The Holy Father referred to this planet as our common home and I think that speaks to how in tune he is to not just Catholics, but to the world as a whole," said Stephen Lynch, 16, a junior from Kingston.

"I really like how (Pope Francis) always referred to us as one, and he wants us to remain as one," added fellow junior Siobhan Salani, 16.

To share in the experience the faculty, staff and the remaining 576 students at Archbishop Williams packed into the school's auditorium to watch the address live.

Peter Hall, communications officer at Archbishop Williams, explained that the school's principal, Dr. Michael Volonnino, "thought it was important for all the students, as part of their Catholic education, to witness that historical address." Hall noted that the student body was "very engaged," often adding their applause to those at the event.

"I think what also made it special was that we may have just been watching it, but some of our own were there experiencing it. That gave it a real sense of community," he said.

Upon their return, Hall hopes that the students will be able to share with their classmates their experience of the event, and that it can remain an important moment in their Catholic school formation.

Reports by Donis Tracy in Boston contributed to this story.