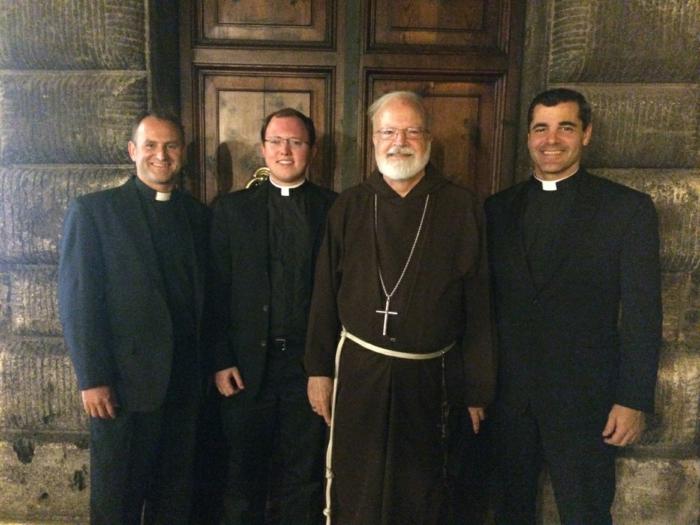 'While in Rome I had a chance to meet with some of our Boston seminarians studying there. We went to dinner and had a great conversation.' Pilot photo/CardinalSeansBlog.org

I spent part of my week in Rome attending meetings with the Holy Father and the group of nine the Holy Father created to advise him on the reform of the Roman Curia and other issues. But before I departed for Rome I was visited by Bishop Dennis Abjenyazi of the Central African Republic. That's one of the countries the Holy Father is planning to visit. It is a country with many refugee problems and violence. He is an old time friend of Father Hickey and every year he comes to Boston to visit. They've known each other since he was a priest and came to study to the United States.

The C9 meetings, as this group of advisors to the Holy Father is called, were very productive and we presented the Holy Father with a plan to establish two new congregations that will incorporate several existing Pontifical Councils. One of them will be a congregation for laity, family and life issues, and the other will focus on charity, justice and peace. Of course, we are just giving recommendations and it will be the Holy Father who may act on those in the future. We also discussed the existing process of selecting and appointing new bishops and we talked about the work of the Pontifical Commission for the Protection of Minors that I preside over, particularly about the importance of speeding up the process of dealing with cases of sexual abuse. While in Rome I had a chance to meet with some of our Boston seminarians studying there. We went to dinner and had a great conversation. Kevin is in fourth theology and will be ordained at St. Peter's to transitional diaconate October 1. The other two Boston seminarians studying in Rome, Kevin Leaver and Michael Zimmerman were not present. They were on retreat that week.

Tuesday night there was a prayer vigil at St. Peter's as part of the International Congress for Young People in Consecrated Life. Rome was full of religious and there were more than 4,000 attending the congress. Archbishop Jose Rodriguez Carballo, Secretary for the Congregation for Institutes of Consecrated Life and Societies of Apostolic Life presided at the vigil. It was a beautiful scene to see all this young religious praying together.

Thursday (9/17) I flew back to Boston, just in time to attend the Celebration of the Priesthood Dinner at the Seaport World Trade Center in South Boston. This year, the gala raised a record $1.8 million to help us to take care of our priests who have given so much to our Catholic faithful. Over 1,600 people attended. It is encouraging to see the outpouring of love and support. We are very grateful to John Kaneb and the committee who helped make this event a great success. I especially want to thank Brian Moynihan, CEO of Bank of America, for his willingness to chair this year's event. His leadership and commitment to our priests is exemplified in his generosity of time and spirit.

We all anticipate the Holy Father's visit to the United States next week. It will be a great blessing, to have him in our country to be able to hear his message of hope and the challenge to live the joy of the Gospel in solidarity with the poor and the suffering. Today (9/18) I am heading to Cuba with a group of Boston pilgrims to accompany the Holy Father in his visit there. Then, of course, he will continue his trip visiting Washington, New York and Philadelphia where he will close the World meeting of Families there. As I leave to join Pope Francis in Cuba, please pray for us and the Holy Father during this historic and joyous moment.