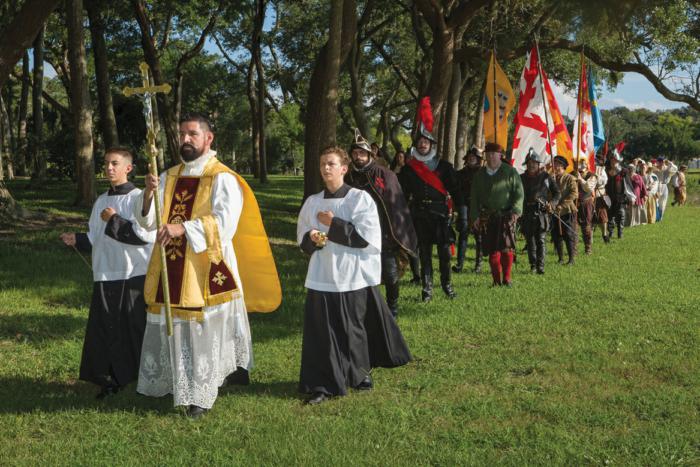 In the morning, before the Mass, there was a reenactment at the very site where the Spaniards would have landed. Courtesy Cardinalseansblog.org/Monarch Studio. Scott S. Smith

This week was the celebration of the 450th anniversary of St. Augustine, Florida, which is the oldest continuously occupied European settlement in the United States, and I was honored to be appointed as the Papal Legate, which is the representative of Pope Francis, to the celebration.

Don Pedro Menendez de Aviles led the Spanish ashore at St. Augustine on the Feast of the Nativity of Mary, Sept. 8, in 1565 and their chaplain, Father Francisco Lopez de Mendoza Grajales, celebrated the first Mass there the same day.

So, on Tuesday, we had a Mass to celebrate the anniversary on the very Feast of the Nativity of Mary.

In my homily I mentioned that the mythical fountain of youth that Ponce de Leon was looking for is supposed to have been located in St. Augustine. I said that now we can understand why so many senior citizens come to Florida!

In the morning, before the Mass, there was a reenactment at the very site where the Spaniards would have landed.

It was quite grand, with people dressed as settlers and soldiers who rowed to shore in boats, replicas of the kind of "chalupas" they would have used.

They even had a priest representing Father Francisco carrying a cross. Part of the ceremony showed Don Pedro venerating the cross, claiming the land "en el Nombre de Dios, y el Rey de Espana." (In the name of God and of the King of Spain).

There were quite a few special guests for the event, including the Spanish ambassador and the Spanish consul as well as a direct descendent of Don Pedro Menendez de Aviles. This week, King Felipe and Queen Letizia of Spain also paid a visit to St. Augustine.

During our visit, we got to experience a little bit of that rich history.

I was somewhat surprised to see the flags and colors of Spain flying throughout the city, but I was reminded that it was a Spanish possession for over 300 years -- longer than it has been part of the United States.

When St. Augustine was established, it was part of the Diocese of Santiago de Cuba, but soon the Spanish Crown sent Irish priests to work there. For example, among the first priests in the settlement was Father Ricardo Arturo (Richard Arthur).

At first blush, it may seem odd that they sent Irish priests to a Spanish colony, but these were Irish priests who spoke Spanish, because the Irish College was in Salamanca, Spain because they couldn't train priests in Ireland and so they were sent to the continent to study.