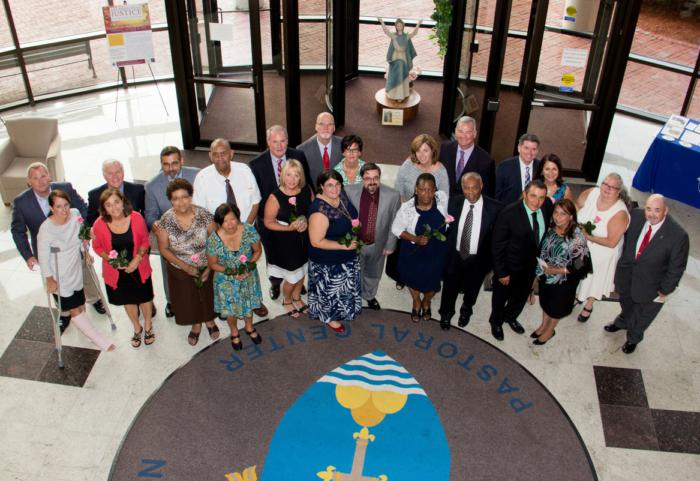 The deacon candidates and their wives are pictured at the pastoral Center following the Aug. 25 ceremony at which they made their Profession of Faith and took an Oath of Fidelity. Pilot photo/Christopher S. Pineo

BRAINTREE -- Twelve men took a step toward ordination to the permanent diaconate in the Archdiocese of Boston as they made a Profession of Faith and took an Oath of Fidelity, Aug. 25, in Bethany Chapel at the Pastoral Center in Braintree.

With the professions and oaths, the men enter their final days as candidates before Ordination to the Holy Order of Deacon at the Cathedral of the Holy Cross on Oct. 17.

Each man's wife held the Book of the Gospels as he took the oath.

Candidates presented a letter to Cardinal Seán P. O'Malley, requesting Ordination to the Order of Deacon, as well as a letter written by the candidate's wife granting her permission and pledging her support of the deacon candidate in his ministry.

The letters were placed on the altar, and the signed Oath of Fidelity and Profession of Faith were witnessed by Father Parrish. Msgr. William P. Fay, Interim Director of Formation, assisted as Father Parrish stamped each letter with the official seal of the Archdiocese of Boston.

The deacons and wives were presented with lapel pins bearing the symbols of the deacon's cross superimposed on wedding rings. Sister Mary Reardon, SND, Assistant Director of Formation, presented each of the wives with a rose.

The men to be ordained are:

-- John Murray from Holy Mothers Collaborative in Hanover and Norwell,

-- Roger Vierra from Holy Mothers Collaborative of St. Mary in Hanover and St. Helen in Norwell, and

-- Thomas M. Walsh Jr. from the Church of St. William in Tewksbury.

The Order of Deacons was instituted by the apostles. It was restored as a permanent and public ministry in the Church by the Second Vatican Council. The restoration of the permanent diaconate was authorized in the United States in 1968.

The aims of the diaconate are to enrich and strengthen the works of service being performed by the Church, to enlist a group of devout and competent married and single men in the active ministry of the Church, and to aid in extending needed charitable and liturgical service to the faithful. Wives of deacons may assist in many of these areas.

Since 1976, the Archdiocese of Boston has ordained over 200 men to the Order of Deacon.