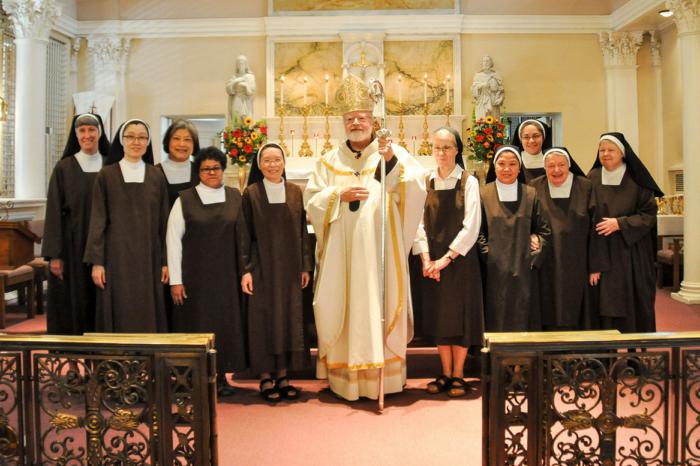 On Saturday I visited the Carmelites in Roxbury to join in their celebration the 125th anniversary of the Boston Carmel. Photo courtesy CardinalSeansBlog.org

On Friday, I had the opportunity to celebrate Mass with the Society of St. Vincent de Paul of the United States at their Annual Assembly in Providence.

Some 800 members of the Society from all over the United States came together to pray, learn, share, renew and plan for the future.

The Society is present in 140 countries around the world with 172,000 members. We are fortunate to have 160 conferences in parishes throughout the Archdiocese of Boston with 4,100 members. The society in the archdiocese is led by Robert Travers, Jr. as its President.

I have always loved the St. Vincent de Paul Society and admire their great spirituality and commitment to those in need. Without a doubt, the wonderful ministry of the Society of St. Vincent de Paul fulfills Pope Francis' call to serve the poor. In caring for the poor, the vulnerable and disadvantaged, they are evangelizing in word and deed. The many works of charity they undertake embraces the love of Christ and leads those they serve to know and love the Lord.

On Saturday I visited the Carmelites in Roxbury to join in their celebration the 125th anniversary of the Boston Carmel.

Their chapel is extraordinarily beautiful and they told me it is one of the oldest Carmelite chapels in the country that has been in continuous use.

In their program for the celebration, the sisters gave a very nice history of how they come to Boston:

In November of 1889, Boston Archbishop John J. Williams was in Baltimore to preside at the opening Mass of the Catholic Congress celebrating the Centennial of the Catholic Hierarchy in America.

While in the city, he visited the Baltimore Carmel. There, he learned that the community had reached its full complement of twenty-one sisters and were having to turn away young women, many whom were from New England. The nuns expressed their desire to establish a monastery in Boston, an idea immediately embraced by the Archbishop.

At his formal invitation, five Carmelite nuns set sail from Baltimore for the new foundation in Boston on Aug. 23, 1890;

Mother Angela of the Presentation, Sub-Prioress

Mother Gertrude of the Heart of Jesus

Sister Augustine of the Mother of God

Sister Alphonsus of the Heart of Jesus

Four days later, on Aug. 27, 1890, they arrived and became the first contemplative order in Boston and the fourth Carmelite foundation in the United States. The following day the Holy Sacrifice of the Mass was celebrated in their convent, presided by Father Charles W. Currier, CSsR, a Redemptorist.

The founding nuns stayed in their first location on Cedar St. in Roxbury for four years. On Sept. 25, 1894, they moved to our present location on Mount Pleasant Avenue.

Several monasteries have been founded from Boston Carmel over the years, including those in Philadelphia, Penn.; Santa Clara, Calif.; Concord, N.H.; and Danvers.

We are so blessed to have the Carmelite Sisters as one of the five contemplative communities in the archdiocese and the sisters are a very important presence in the Roxbury neighborhood. The presence of the contemplative sisters is such a powerful witness to the importance of the interior life. The sisters are a powerhouse of prayer, constantly praying for the needs of the Church and the world. That is one of the reasons the Catholic faithful appreciate them so much.