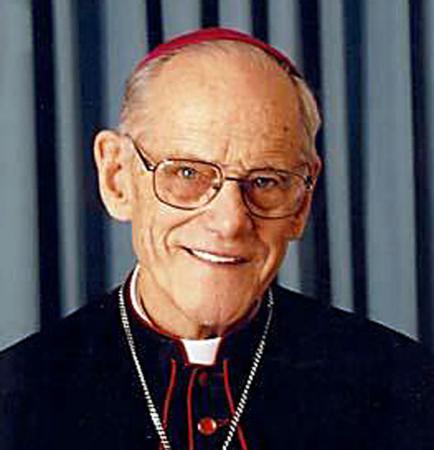 He was born in Boston on Jan. 9, 1921, one of six children of the late George and Marie Louise (Duval) Pearce. He received his primary education at St. Columbkille School, Brighton (future Bishop Joseph Maguire was a student, though two years older than Pearce at the same school); he entered the Marist minor seminary, Maryvale, in Bedford in 1934. He joined the Marists (the Society of Mary) in 1940 at the age of 19 and pronounced his vows on Sept. 1, 1941.

After completing his studies at Marist College and major seminary in Framingham, he was ordained a priest by Archbishop Richard J. Cushing in Our Lady of Victories Church in Boston on Feb. 3, 1947.

On Feb. 29, 1956, Pope Pius XII named him Titular Bishop of Attalea in Pamphylia and Apostolic Vicar of the Archipelago of the Navigators. The title of the vicariate was changed to Samoa and Tokelau Islands on Jan. 4, 1957. Father Pearce returned to Boston for his episcopal ordination which took place on June 29, 1956 in the Church of St. Columbkille. A youthful 35 years old, he was ordained a bishop by Archbishop Cushing, who was assisted by Boston Auxiliary Bishops Eric F. MacKenzie and Jeremiah F. Minihan.

The Apostolic Vicariate of Samoa and Tokelau Islands was raised to diocesan rank as the Diocese of Apia on June 21, 1966 by Blessed Pope Paul VI. One year later, on June 22, 1967, Bishop Pearce was named Metropolitan Archbishop of Suva, Fiji. He also served as Apostolic Administrator of the Diocese of Agana, Guam, from Dec. 1968 until mid-1969. He remained Archbishop of Suva until Apr. 10, 1976, when his resignation was accepted by the Holy Father.

Returning to the United States, he served as a member of the Marist Core Group of Bethany House of Intercessions from 1977 to 1983. He became a personal assistant to Bishop Louis Gelineau of Providence in 1983 and remained in that position until 1997. Throughout most of his time in Providence, he assisted the successive bishops with confirmations and various other episcopal functions.

He attended all four sessions of the Second Vatican Council (1963-1965). He also had the distinction of being one of the last living council fathers. With his death, there are only 43 surviving council fathers across the globe, of whom three are from the United States: Most Rev. Raymond G. Hunthausen, Archbishop emeritus of Seattle, Wash.; Wisconsin-born Bishop John C. McNabb, OSA, emeritus of Chulucanas, Peru; and Lawrence-born Bishop William J. McNaughton, MM, emeritus of Inchon, South Korea, who lives in retirement in Methuen.

The archbishop was one of 19 bishops who received episcopal ordination from Richard Cardinal Cushing. Seven were Boston auxiliary bishops, one was the bishop of a suffragan diocese, ten were bishops ordained for mission territories, and one was ordained for the Armenian Catholic patriarchate. With his death, only two of those bishops are alive: Most Rev. Daniel A. Cronin, Archbishop emeritus of Hartford, and Bishop William J. McNaughton, MM.

At the time of his death, Archbishop Pearce had passed more than 74 years in religious life; 68 years as a priest; and 59 years as a bishop. He lived a life of outstanding dedication to Christ and His Church.

Among his survivors are his brother Paul, Gladwyne, Penn.; as well as several nieces and nephews. He was preceded in death by his sisters Ruth Bruen, Marie Higgins, and Dorothy Bruen, and his brother John Pearce.

The Pontifical Mass of Christian Burial will be celebrated on Sept. 4 in the Cathedral of Saints Peter and Paul, Providence, R.I.

He will be buried in Sacred Heart Cemetery, Andover.

Charles N. Bransom is an occasional writer for The Pilot. A resident of Brandon, Fla. He is author of several books on bishops of the USA and bishops of various religious orders.