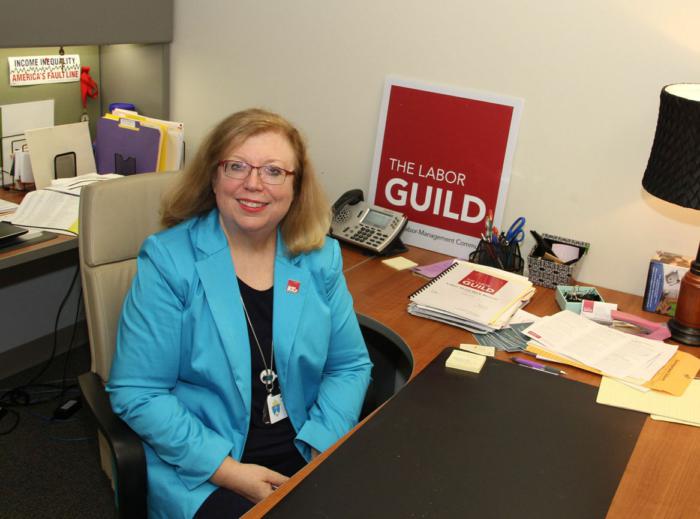 Allyson Every, executive director the Labor Guild in the Archdiocese of Boston is pictured in her Pastoral Center office Sept. 2. Pilot photo/Christopher S. Pineo

BRAINTREE -- While most of the country focuses the importance of labor mainly on the first Monday of September, at the Labor Guild in the Archdiocese of Boston, labor and related issues take priority year round.

Under the leadership of executive director Allyson Every with guidance from incoming chaplain Father Frank Cloherty, the Labor Guild maintains a Catholic core while members and participants come from the Catholic Church and other faith traditions as well.

"We serve all workers. We aim to specifically serve those who are in a collective-bargaining relationship or who would like to be," Every said.

She said the guild works with both workers and management to build bridges in the field of labor-management and in the workplace.

"We have supervisors who come, or people who are borderline -- they may not be in the union environment, but they are having difficulties and they want to know how to deal with the different forces. Some people just want to understand the economy better," she said.

Originally founded in 1945, and reestablished in the early 1950s under Cardinal Richard J. Cushing, the Labor Guild provides educational resources, locations and opportunities for labor-relations meetings, online and printed materials regarding labor issues, and other resources related to labor relations in workplaces.

With the guild's recent move of headquarters from Weymouth to offices at the Pastoral Center in Braintree, guild offices are now closer to Boston and more accessible via major highways.

The guild became a 501C-3 a year ago, making it a nonprofit supported mostly by fees for services provided and the funds raised by the annual Cushing-Gavin Awards banquet. The move will free up some expenses for the Labor Guild Every said.

While rooted in the past, recent initiatives by the guild have addressed current workplace issues such as implementation of the Affordable Care Act.

They have also addressed issues arising as shifts in the labor pool -- such as a rise of freelancing, as more workers are being classified as outside contractors, and a shift toward a sharing or peer economy characterized the ride-sharing services Uber and Lyft.

After being established in 1945, membership and participation waned with time, but in 1952 the Labor Guild was reconstituted.

Anti-communist hysteria played a large part in the decline of the original guild, but an alliance between a New York native who moved to Boston and local labor leaders ushered in a reconstituted Labor Guild.

That core group formed the nucleus that approached Cardinal Cushing and elected the first officers of the newly reconstituted Labor Guild in 1953.

Early efforts of the Labor Guild focused on education and the guild reopened their previously closed Labor School. In those early days, enrollment topped out at 300 students per term, but Avery said the Labor Guild continues the focus on educational support and resources.

"There was a lot of 'red scare' going on at the time, and the Church was very strongly supportive of good, solid trade-unionism, and a little nervous about what was happening in other parts of the world. They wanted a strong labor movement to be rooted quickly and reestablished quickly," Every said.

The guild estimates that school, now called the School of Labor-Management Relations, has served 45,000 participants since it opened in 1953.

As part of the Catholic identity of the guild, the teachings and philosophies take root in the papal documents "Rerum Novarum," Quadragesimo Anno," and "Pacem in Terris," which address the theology of work, with ideas that include the idea of a living wage, the right of association, the role of government, and similar issues.

"The Church has always been for good support of all organizations, human organizations, companies and management. They can go off track in terms of morality," Every said.

Every said when Pope Leo XIII worked on "Rerum Novarum" -- an 1891 encyclical largely concerned with markets and labor -- he envisioned the Church providing more reasonable solutions to labor issues than those provided by more radical ideologies like socialism and Marxism.

She said by providing education, space for negotiations and understanding of labor-relations the Labor Guild can help avoid the pitfalls inherent to human organizations.

"Getting back into the light is always the challenge," she said.