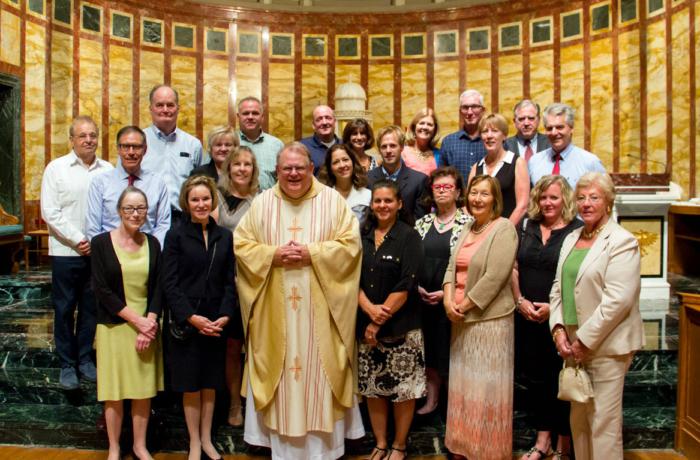 BRIGHTON -- Local Catholics heading to Cuba during the pope's visit in September gathered for a Mass at St. John's Seminary Aug. 20 to receive the Blessing of the Pilgrims from rector Msgr. James P. Moroney.

About 85 people will make the trip from Boston Sept. 18 and return Sept. 22, which will coincide with the pope's visit to the island nation. The pilgrims are scheduled to attend the Mass celebrated by the pope Sept. 20 in Havana's Revolution Square.

In his homily, Msgr. Moroney spoke about the motivation behind making a pilgrimage.

"Why be a pilgrim? Because every pilgrimage is but a rehearsal, every such trip a preparation for that final journey which we will take at the end of our lives. When we will run out to meet him as he comes to judge the living and dead, facing our Creator with the hope of eternal life," Msgr. Moroney said.

He said as the pilgrims make their journey they will share a motivation with Pope Francis.

"For every pilgrimage, every procession, every movement, from here to there is but a reflection of the only procession, the only pilgrimage which really matters -- from here to eternity. The same is true for popes as it is for pilgrims. Pope Francis, who is planning for his pastoral visit to Cuba in just few weeks, is going for the same reason you are, to draw closer to God, and to draw others along that same path," Msgr. Moroney said.

Both the pope and the pilgrims follow precedent from their peers as they journey to Cuba.

Even after the United States Embassy in Cuba reopened earlier this month, an embargo in place since 1960 will still be in effect during the pilgrimage.

Msgr. Moroney said also that "despite the socioeconomic, political and historical aspects of this trip, at its heart is Jesus, His Blessed Mother and His Church and the universal call to holiness in Him."

He explained the connection between Christ and Cuba through the Blessed Mother as he gave a brief summary of the story of Our Lady of Charity of El Cobre, the nation's patroness.

Msgr. Moroney said that over 400 years ago, three boys set out in a rowboat across the Bay of Nipe on the eastern side of Cuba, looking for salt to preserve meat for their families. But, halfway across the bay, the three found themselves in an unexpected storm.

"But when the clouds parted they saw, way in the distance a statue of the Blessed Virgin Mary approaching them above the waves. She was holding the Christ Jesus in one arm and a golden cross in in the other, with a sign beneath, 'I am the Virgin of Charity,'" he said.

On the 400th anniversary of the apparition, Pope Benedict XVI entrusted the good of the nation and its people to the Mother of God "advancing along the ways of renewal and hope, for the greater good of all Cubans." He said the pope then approached the actual statue from the story, lit a candle, and stood in silent prayer for several minutes while a choir sang "Salve Regina." He also recalled that during the papal visit of Pope Benedict XVI the pontiff called for a renewal of faith.

He pledged his prayerful support for the pilgrimage to those in attendance, which included members of the Order of Malta and graduates of the Master of Arts in Ministry.

"I envy you in making this journey to a land with such a rich and long history of vibrant Catholic faith. But I will be one with you in prayer, joined at the altar, as it were, and I urge you for your entire journey to be like the three young men in the boat, keeping your eyes fixed on the horizon, ever hopeful of finding 'Our Lady of Charity,' and her Son, who is the fulfillment of every pilgrim's dream," he said.

As he finished his homily, he invited the pilgrims to stand for the Blessing of the Pilgrims for their trip next month.

"All-powerful God, you always show mercy toward those who love you, and you are never far away for those who seek you. Remain with your servants on this holy pilgrimage and guide their way in accord with your will. Shelter them with your protection by day, give them the light of your grace by night, and, as their companion on the journey, bring them to their destination in safety. We ask this through Christ our Lord," he said.