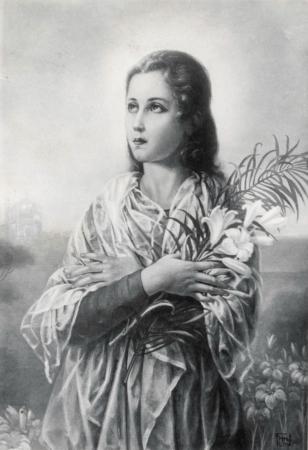 BOSTON -- The body of St. Mary Goretti will be brought to the Cathedral of the Holy Cross Oct. 5 as part of a historic first trip to the United States.

The Treasures of the Church ministry will present the "Pilgrimage of Mercy: the Tour of the Major Relics of St. Maria Goretti" from September to November, with stops at 25 dioceses in 16 states, including New York, Boston, Newark, Philadelphia, Detroit, Chicago, Atlanta, Houston, and Oklahoma City. Hosts of the body will include parishes, schools, and prisons during the tour, which will be only the second time she has left Italy.

The ministry says the purpose of the tour is, "to give people an experience of the living God through an encounter with the relics of his saints in the form of an exposition."

Each stop on the tour will include presentations on the life and virtues of St. Maria Goretti throughout the day, which will provide the catechetical and spiritual basis for the veneration of her remains.

At the public veneration after the 9 a.m. Mass at the Cathedral of the Holy Cross a wax statue containing her skeletal remains will be displayed inside a glass-sided casket. A Mass will also be celebrated in St. Maria's honor at 7 p.m. with a period of public veneration following until 11 p.m.

Organizers said the body is not incorrupt, and none of the sacred remains are visible. Nevertheless, the skeleton is complete, except for small amounts of bone placed in reliquaries over time, and her right arm which was donated by her mother to the Church of St. Nicholas, now known as the Sanctuary of St. Maria Goretti, in her birth town of Corinaldo.

The saint's right arm has special significance because, as organizers described, "With her right arm she defended her purity and prevented Alessandro Serenelli from raping her."

The youngest canonized saint in the Catholic Church, Maria Goretti was only 11 years old when died July 6, 1902, after being stabbed 14 times in the attempted rape. Her last words on her deathbed were of mercy towards her 20-year-old attacker.

"I forgive Alessandro Serenelli," she said. "I want him with me in heaven forever."

Serenelli reported receiving an apparition of his victim within his prison cell six years into his 30-year sentence, which began his transformation, "from a violent and ruthless brute to that of a gentle and renewed soul intent on spreading devotion to God and his saintly victim" according to organizers.

She was canonized by Pope Pius XII in 1950. St. Maria Goretti is venerated as the patroness of youth, young women, purity, and victims of rape.

The tour comes on the heels of a papal declaration of an Extraordinary Holy Year of Mercy set to begin Dec. 8. The visit of the major relics of St. Maria Goretti is an effort by the Congregation of the Causes of Saints, her Pontifical Basilica, and Treasures of the Church, to prepare and catechize the United States for the year of celebration in the life of the Church.