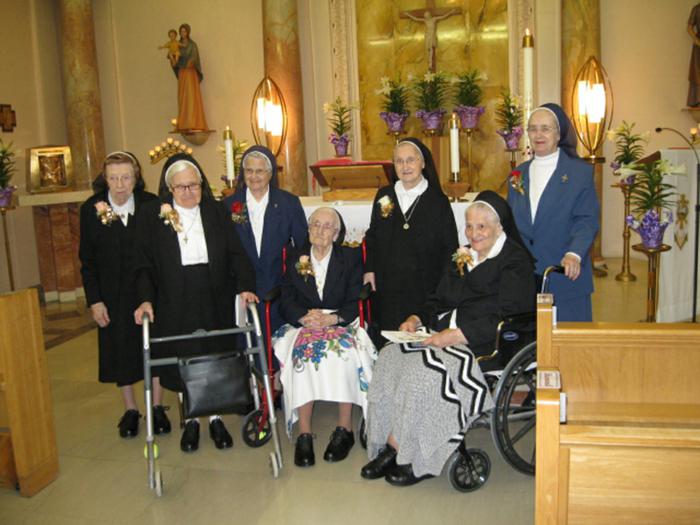 "My daughters will cross the seas," predicted Anne Marie Rivier, foundress of the Sisters of the Presentation of Mary. Little did she know how many times and how many seas her sisters would cross in the more than 200 years since the Congregation's foundation.

On Nov. 21, 1796, feast of the Presentation of Mary in the Temple, Marie Rivier and four of her companions had the incredible audacity to found a community in the small village of Thueyts, in the department of Ardeche, France at the height of the French Revolution. Together they consecrated themselves to God and to the education of youth. These five young women were really poor, almost destitute. But nothing could quench the fire that burned within them. Making Jesus Christ known and loved became their whole life.

During her lifetime, Marie Rivier served the Church in more than 100 parishes. In addition to teaching children, she gathered the women of these parishes on Sunday afternoons to support them in their faith and family life. The sisters also brought comfort to the sick in their milieu.

In 1853, six sisters crossed the ocean and arrived in Canada at the request of the Bishop of St. Hyacinthe, Quebec. In 1873, five sisters left Quebec for Glens Falls, N.Y. to take charge of a school but due to illness, they returned to Canada in 1879. Seven years later the Sisters of the Presentation were invited to open a school in Island Pond, Vt. That would prove their very first permanent mission in the United States. By the end of the 19th century and through the 20th century, many sisters would staff schools in Franco-American parishes in five of the six New England states.

The Sisters of the Presentation of Mary arrived in the Archdiocese of Boston in 1955 to staff the elementary school at Assumption Parish in Bellingham at the request of the pastor who saw the need for a school for his 900 families. Four sisters answered the call to teach God's children. They began the school year with the first, second and third grade classrooms in the parish hall. In January 1956, with great joy, the sisters and the students entered their new school. The sisters and lay staff would offer the students a quality education until 1974 with Our Lady of the Assumption to inspire them.

In 1957, the Sisters of the Presentation of Mary bought what had once been the Searles Estate in Methuen. The Sisters needed a new location for administrative offices, a residence for the elderly and the sick and some property to establish educational facilities. After some "sprucing up" the buildings on the Searles Estate were adequate to begin to meet those needs. Eventually other buildings would be added to answer the call to grow and expand.

In 1958, Presentation of Mary Academy opened its doors to young women focusing primarily on college preparatory courses. In September 2010 the Academy became a co-educational school and in 2012 opened a dorm for international students. Today, there are 220 students at PMA.

In addition to the high school, the Sisters opened a kindergarten and a pre-school to serve the needs of families in the area. The Early Childhood Program continues to educate the young people of the greater Methuen area.

Presently, sisters in the Archdiocese serve as teachers, administrators, visitors to the homebound and elderly, spiritual and retreat directors, intercessors for the Church and the world at large, Marian apostles, and a supportive presence to the bereaved.

Sisters of the Presentation of Mary did indeed cross the seas as our Blessed Foundress had predicted and can be found in Canada, Peru, Brazil, France, England, Ireland, Italy, Portugal, Madeira, Spain, Switzerland, Gambia, Senegal, Burkino Faso, Cameroon, Mozambique, Japan, and the Philippines. The Congregation's generalate is now at Castelgandolfo overlooking Lake Albano on the outskirts of Rome.

Since the beatification of Anne-Marie Rivier in 1982, numerous lay associates have committed themselves to the spirituality of the Sisters of the Presentation of Mary, making Jesus Christ known and loved in creative and new ways. More recently another group has taken root, the Consecrated Laity of the Presentation of Mary (CLPM). The members of this group make a vow of chastity in addition to following the spirituality of the Sisters. For the Sisters, this has been a time of navigating uncharted waters, touching yet other shores where life is teeming.

Sisters of the Presentation continue to spread the Good News where they find themselves and are open to the surprises that God offers them.

Sister Cecile Plasse, PM, is the local superior for the elderly sisters living at St. Joseph Residence in Manchester, N.H.