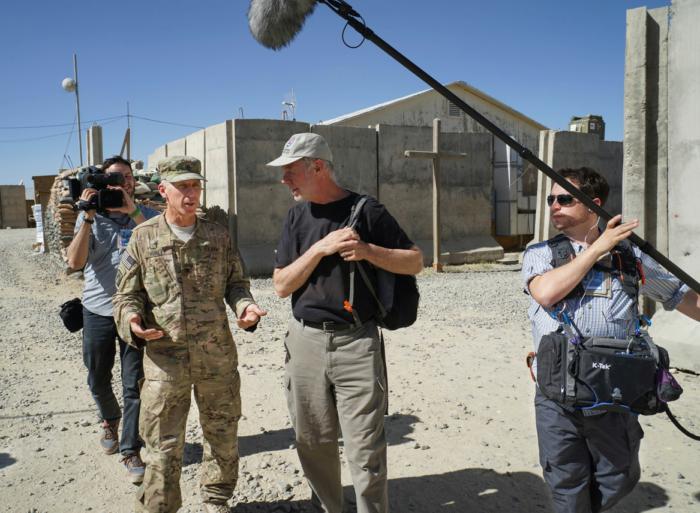 WASHINGTON -- An upcoming public television documentary will feature the work of a Boston priest whose service as a military chaplain took him from bases in the U.S. to the frontlines in Iraq and Afghanistan.

Chief of Chaplains Father Paul K. Hurley became a major general and took office as the Army's 24th Chief of Chaplains in April. He played a prominent role in the film "Chaplains" to be released on DVD in October and aired on PBS in November, which will focus on the ministry of chaplaincy in theaters on the battlefield and beyond.

As the senior U.S. Military chaplain on deployment to Afghanistan, Father Hurley, in battle fatigues, went about his pastoral work with U.S. servicemen and women, hearing their confessions, counseling them on spiritual matters, encouraging them in their service, and celebrating Mass, as the film crew shadowed him in June 2014.

"This is kind of a dangerous place," Father Hurley told producer and director Martin Doblmeier.

"But still, what am I here for? Why am I wearing this uniform?" Father Hurley asked. "I believe God has led me here and given me this mission to care for these people, to minister to them, and it is not going to happen by me sitting in one place."

The camera followed Father Hurley closely as he moved about Afghanistan by helicopter to remote posts on the frontlines, or forward operating bases, as he pursued his ministry to those who serve.

"People who face mortality have a much clearer picture of what is important. This also gives them that comfort and satisfaction that their lives are in relationship with God," he said.

With the permission of his bishop a chaplain in the armed forces, serves as a priest under the jurisdiction of the U.S. Archdiocese for the Military Services, based in Washington.

Father Hurley graduated from St. John's Seminary in Brighton and the U.S. Military Academy at West Point. He was ordained in 1995 for the Archdiocese of Boston and served as a parish priest before he took up active duty as the 1-321st Field Artillery battalion chaplain. His deployments included tours in Iraq and Afghanistan.

With the 15-minute opening segment on Father Hurley setting the tone, the two-hour documentary shifts focus to other chaplains in various settings, including a motion picture retirement home in Hollywood, a poultry processing plant in Tennessee, a state penitentiary in Oregon, the U.S. Congress, a hospital bedside, and even a NASCAR racetrack.

The film will be screened Sept. 10 at Catholic University of America in Washington, D.C., followed by a question-and-answer discussion with filmmaker Martin Doblmeier of Journey Films.

Doblmeier is known for previous films on faith and spirituality, including "Bonhoeffer," "The Adventists," and "The Power of Forgiveness." A presentation of Maryland Public Television, "Chaplains" begins airing nationally on PBS stations in November 2015 and will be available October on DVD at www.journeyfilms.com.

"Many people openly say religion is the cause of so much of the evil in the world, and people who call themselves religious spend too much time arguing over insignificant points of belief. I think chaplains offer a very different model for a person of faith in the everyday world, as they strive to build bridges rather than create divides, and as they engage them not as someone to be converted but who needs to be met where they are," Doblmeier said.