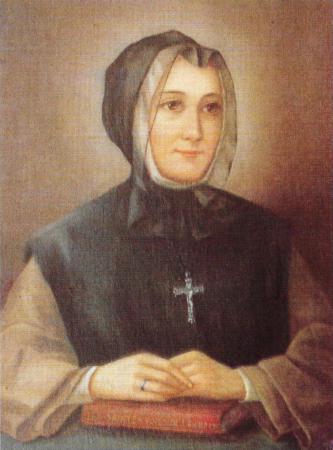 "An institution is the lengthened shadow of one (wo) man." (Emerson). This truth is illustrated by Marguerite d'Youville, Foundress of the Grey Nuns, by her "shadow" that has spread beyond Montreal to distant areas of the world, ever since its beginnings.

Born Oc. 15, 1701 in Varennes, Quebec, to a privileged family, her childhood changed when her father died when she was seven. Eldest of six, she assisted her mother, who was plunged into poverty. Thanks to others, she attended school with the Ursuline Sisters in Quebec City for two years, then returned home to teach her siblings.

At 18, Marguerite was engaged to a young man of nobility, when her mother married a doctor, Irish, below her social standing, whereupon her fiance broke off their engagement. Eventually, Marguerite met and married Francois d'Youville, in 1721, making their home with his mother. The following years were a time of distress for Marguerite. Francois was self-centered, a fur-trader with the Indians, to whom he illicitly sold liquor in shady dealings. Life with his domineering mother, Marguerite found discouraging and lonely. Six children arrived and rarely was their father present. When his mother died, Francois gambled away his inheritance. He died at 30, in disgrace, yet cared for by Marguerite, now a widow at 28, with two sons, four other babies having died.

During an especially dark period, Marguerite experienced a moment of God's grace that overturned her sense of personal failure. She became convinced of God's love for her and that Divine Providence had and would provide her every need. This conviction became the source of her total Trust, giving her heroic courage that upheld her ever after.

Without self-pity, Marguerite opened a shop in her home, allowing her to support herself and to pay off her husband's debts. As her situation improved, and encouraged by her Sulpician Director, who recognized her generosity of spirit, Marguerite began to reach out to those most in need. Her own suffering had intensified her sensitivity to the woes of others. One by one, others joined her in her ministry. Having taken a homeless blind woman into her home, Marguerite and three like-minded friends dedicated themselves to donate and hold all in common and to offer all in love and service to the poor. Dec. 31, 1737 became the beginning of the Grey Nuns. This name, given them in derision by people who recalled her husband's dealings with alcohol, "grey" meaning in French both a color and tipsy, they later chose for their distinctive clothing.

In 1747, they were asked to operate the town's hospital, then in total disrepair. Once renovated, it served into the future the disadvantaged of Montreal. During the French and English war, wounded of both armies were treated equally. In 1755, when Indians had smallpox, Grey Nuns responded and as they would in 1847, when Irish Famine Ships, with typhus aboard reached Montreal, caring for them cost some of their lives.

Over time, many generous women joined the Grey Nuns, forming six autonomous branches, in Canada, and the United States responding to arising needs in North America and worldwide.

Grey Nuns with dedicated lay people, continue to minister to the needy, extending the "lengthened shadow" of Marguerite's love and compassion to places she couldn't have imagined but to the poor she would easily recognize, inspiring Pope John XXIII to name her Mother of Universal Charity at her beatification in 1959. Pope St. John Paul II canonized her in 1990, making her the first Canadian-born saint.