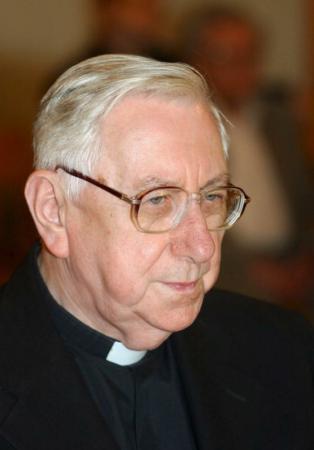 Here is a May 30, 2003, file photo of Cardinal Laszlo Paskai of Hungary. The retired primate died Aug. 17 at the age of 88. He led the Catholic Church in Hungary as the country moved from communism to democracy at the end of the 1980s. (CNS photo/Attila Kovacs, EPA)

VATICAN CITY (CNS) -- The retired primate of Hungary, Cardinal Laszlo Paskai, died Aug. 17 at the age of 88. He led the Catholic Church in Hungary as the country moved from communism to democracy at the end of the 1980s.

Born in Szeged, Hungary, in 1927, as a young man he experienced first the Nazi, then the Soviet occupations of his homeland.

He entered the Franciscan order in 1945 and studied theology in Gyongyos. Although the communist government banned most religious orders and severely limited the number of members and ministries of the remaining orders in 1950, the future cardinal was ordained to the priesthood for the Franciscans in 1951.

After earning a doctorate in theology in Budapest, he returned to Szeged, where he first became secretary to the bishop, then a philosophy professor at the local seminary. Later, he taught philosophy and served as spiritual director at Budapest's central seminary and was appointed rector in 1973.

Blessed Paul VI made him a bishop in 1978, naming him apostolic administrator of Veszprem. A year later he became bishop of the diocese. In 1982, St. John Paul II named him coadjutor of the Archdiocese of Kalocsa.

The pope named him archbishop of the primatial see of Esztergom-Budapest in 1987 and made in a cardinal the following year.

In a statement posted on the archdiocesan website, his successor, Cardinal Peter Erdo, recalled how Cardinal Paskai led the church through a period of difficult, but exciting changes, and he was the one who arranged for the body of Cardinal Jozef Mindszenty to be returned to Hungary and buried in Esztergom in 1991.

In 1971, Cardinal Mindszenty, then 79, was forced into exile after suffering torture and imprisonment under the communists and spending 16 years as a refugee in the U.S. Embassy in Budapest.

He left Hungary pledging he would not set foot again in his homeland until the demise of communism. At ceremonies marking the return of his body, Cardinal Paskai told the crowds, "In these moments, his wish is coming true after 20 years."

Cardinal Paskai's death leaves the College of Cardinals with 219 members, 120 of whom are under the age of 80 and therefore eligible to vote in a conclave.