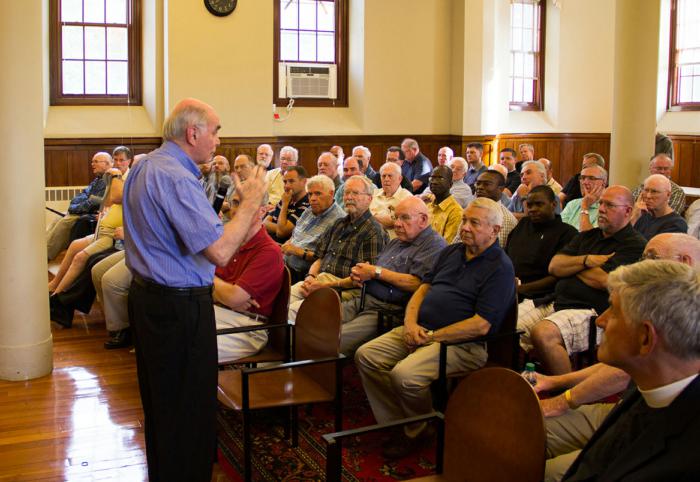 Held each year since 2005 around the time of Aug. 4, Feast of St. John Vianney, the patron saint of priests, the cookout provides a casual atmosphere for a time of priestly fraternity. The gathering traditionally includes a talk on some aspect of priestly ministry, followed by a vespers service and concludes with a cookout held on the seminary grounds.

Father Hehir, archdiocesan secretary for Health and Social Services, told the gathered priests that he would give them a broad overview of the 173-page document due to time constraints.

In June before the release of the encyclical, Pope Francis urged bishops to help Catholics hear and understand the document. Cardinal Seán P. O'Malley sat alongside his priests during the talk.

Father Hehir also spoke about specific actions the pope took to address the problems outlined in the encyclical -- which included human trafficking and the human dignity of the poor -- after publication. Father Hehir referenced a July meetings on human trafficking and climate change hosted by the Pontifical Academy of Social Sciences and the Pontifical Academy of Science for mayors and political delegates.

"Then after he did it, he then calls the mayors from around the world to attend the conferences with the Pontifical Academy of Science. So, there's a kind of marketing approach ahead of time, then there's a follow through, and then there's an objective," he said.

Father Hehir said the pope aimed at an international objective with the encyclical, The United Nations Climate Change Conference to be held in Paris, France later this year.

Father Hehir referred to the reception of the letter by the media to emphasize its impact.

Father Jurgen W. Liias, a former Episcopal priest of 40 years ordained to the Catholic priesthood in 2013, shared his thoughts on the talk with The Pilot.

Father Liias, pastor of the Anglican Ordinariate parish St. Gregory the Great in Stoneham, said he appreciated the perspective on the reception of the encyclical.

"It's the first time in about 20 years of the Catholic Church getting a lot of positive press. It's kind of neat at least that people are still continually receptive," he said.

Following Father Hehir's talk, Cardinal O'Malley led the priests in praying vespers in the lecture hall rather than the seminary chapel, which is undergoing renovations.

In his preaching the cardinal suggested that priests use the encyclical as a jumping off point to connect with young people in the Church.

"I think especially for us, here in Boston where we have so many young people, this is a great opportunity for us to expose our young people to the Magisterium with a theme that they are passionate about," Cardinal O'Malley said.

The cardinal also acknowledged the African priests who attended the event alongside their brothers in the archdiocesan priesthood. The Society of African Missions missionary society of priests frequently sends groups of members to the archdiocese to assist parishes in the summer months.

Following the prayer service, the priests were invited to join a casual summer barbeque in the seminary courtyard.