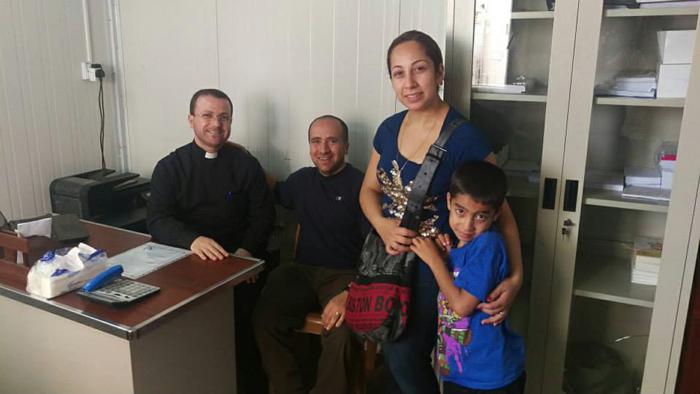 The family of Sermed Ashkouri visits with Father Benham Benoka in the health clinic at the Christian refugee camp in Erbil, Iraq. Pilot photo/courtesy Sermed Ashkouri

BRAINTREE -- A family from the Syriac Catholic community in the Archdiocese of Boston recently made a trip to Iraq where they delivered much-needed aid directly to displaced Christian and Yazidi families living in tents and caravans as a result of attacks by the self-proclaimed Islamic State.

In a post on Sermed Ashkouri's Facebook page that accompanied an online photo album of their trip, the family said they delivered three suitcases filled with medication to Mart-Shmouny Charitable Health Center in Ankawa, a suburb of Erbil in northern Iraq, along with $5,000 in financial donations.

Ashkouri told The Pilot that bringing in smaller donations from different groups really made the project work.

The Ashkouri received donations from the Our Lady of Mesopotamia Syriac Catholic Mission in Newton where they worship, but other sources too. Donations also came from groups like parishioners of Mary Immaculate of Lourdes in Newton groups and members of the Archdiocese of Boston diaconate program. The family even engaged the local business community for support.

"With Mr. Sermed Ashkouri visiting with his family there, we were able to provide some first-aid products that could be utilized at their clinics that are helping the Christian communities right now in northern Iraq. It was just something little that we could provide," Saad Dinno said.

The camp the family visited housed Christians and Yazidis. Though the Christian communities of Iraq predate the spread of Islam in the nation or the region, the group remains a minority population. The Yazidis are a small ethno-religious community persecuted by the Islamic State because of their religion.

Ashkouri said on previous trips to Erbil, where he has family, he had seen growth both in the local economy and the construction sector. With the war and the refugees, he said that has paused. As an example he said some of the refugees now have the trailers as living quarters installed on the floors of partially constructed multi-story buildings.

He said people in the camps lack basic essentials while living in a harsh environment.

Ashkouri said the people in the camps lost everything to preserve their faith and human dignity and daily faced the threat of dehumanization, death and rape when the Islamic State invaded their homes and towns in Mosul and Nineveh.

Ashkouri said the family would have taken the trip to visit his extended family in Erbil, but they wanted to do something more to help.

His wife, Aseel Adel Naami said the family of four wanted to stick together for the trip and support the communities in Erbil as one. She said they also wanted to show their children the reality of the situation there and share that with people in the United States.

She also said she intended the Facebook album as a measure of documentation for where the donations went. Some of the photos show lists of what was received signed by organizers such as Father Benham Benoka, also a doctor who serves the local clinic.

"Some people ask for what the money went for, so at some points it was hard to get receipts because you are going to camps and handing the money by hand, so I thought the best way to do it is by taking pictures of what people are going through, how they live, and where we visited," she said.

The family posted the album publicly on the couple's Facebook pages, where they thanked those who supported their efforts in Iraq.

"Thanks a lot for your support. You are the light that Jesus sent to the world, keep shining in this dark evil world. God bless you and bless your families. Be grateful that you are safe and have a place to rest your head on. Our kids are spoiled, show them how their brothers and sisters are living," the post said.