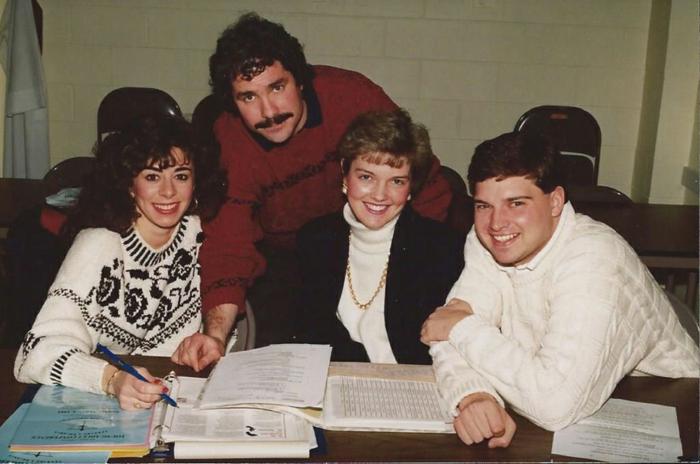 Lenora Boyle, Brian Cody, Susan Brennan and Jim Connelly pose for a photo in a 1990's edition of The Pilot before an annual young adult conference. Courtesy photo

BRAINTREE -- As the "Ice Bucket Challenge" returns in August with the new slogan "Every August until a cure" to support research toward a cure for ALS, a group of parishes and priests of the Archdiocese of Boston will commemorate a young life taken by ALS 20 years ago this week.

On Aug. 1, 1995 the Archdiocese of Boston lost Brian Cody, an active young adult leader, to ALS according to an email from the pastor of St. Martha Parish in Plainville and St. Mary Parish in Wrentham Father William T. Schmidt.

After a Sunday Mass at St. Mary Church in Wrentham to commemorate the 20th Anniversary of Cody's passing, St. Mary Parish in Wrentham and St. Martha Parish in Plainville will initiate a month-long "living tribute" to Cody with a three-part series of Theology on Tap.

"Brian Cody was right at the heart of Young Adult Ministry during a period of pronounced growth during the 1990's for this 'bridging of the gap' between the Church and young adults in their 20s and 30s," Father Schmidt said.

The parishes will present the Theology on Tap sessions at Mr. Dooley's Olde Irish Country Pub at 303 Shears Street in Wrentham on Tuesdays at 8 p.m. throughout the month.

The first session on Aug. 4 will pose the question: "Why Won't God Go Away?'' The presenter, Father Richard Clancy has served until recently as Director of Campus Ministry for the Archdiocese of Boston and Catholic Chaplain at M.I.T. Father Clancy will offer his reflections on the challenge to live as a person of faith in a culture that has become increasingly secular in its outlook and distrustful of any truths that cannot be scientifically verified. An opportunity for questions and comments will follow Father Clancy's presentation.

At the second session on Aug. 11, at the same time and place, Msgr. Timothy Moran will offer an overview of the recent encyclical of Pope Francis "Laudato Si'" on responsible stewardship for the environment.

"Issued recently, 'Laudato Si''' has generated intense discussion around the world on issues pertaining to the environment and social justice. This encyclical will certainly be a major focus of the message that Pope Francis extend on his upcoming visit to the United States and the United Nations," Father Schmidt said.

There will be copies of the encyclical available for participants and there will once again be time for questions and discussion following Msgr. Moran's presentation. Msgr. Timothy Moran serves as pastor of St. Joseph Parish, Medway. He previously served the Vatican's Diplomatic Service in Germany and India.

In the third session on Aug. 18, Father Matthew Wescott will focus his talk on current issues of war and peace inherent in a world increasingly challenged by terrorist threats at home and abroad. Father Matt Wescott is currently pastor of St. Mary Parish in Foxboro. He served for a number of years as Chaplain at the Catholic Center at Harvard University. He recently returned from military deployment as a chaplain in Afghanistan.

"The target group for the Theology on Tap sessions will be young adults in the 20s and 30s, but I.D.'s will not be checked if some of the 'former young adults' of Brian Cody's generation desire to honor his memory and experience once again some of the excitement of the young adult ministry that was such a driving force in his life and their lives," Father Schmidt said.

After participating in an Archdiocesan Listening Session for young adults at St. John the Evangelist Parish in Wellesley in 1989, Cody became one of the original members of the Archdiocesan Young Adult Council which coordinated annual archdiocesan conferences and activities for young adults, while supporting local young adult groups in more than forty parishes.

Cody made his primary commitment to the young adult ministry at St. Ignatius Parish in Chestnut Hill, but also played a vital part with other groups in Wellesley, Needham, Belmont, Norwood. He also became the first editor of the archdiocesan young adult newsletter, "Footprints." He became the first recipient of the "Christifideles Laicis Award" in 1994 "in recognition of his outstanding commitment to the vocation of the lay faithful in the Church and in the world." He received the award, which presenters later named for him, shortly before news broke of his diagnosis of ALS.

"Brian struggled valiantly to maintain his teaching responsibilities at Assabet Valley Regional Technical School and his leadership commitment within Young Adult Ministry throughout his battle with the debilitating effects of ALS. Brian passed peacefully to the Lord on Aug. 1, 1995 before the projected progress of his disease would have necessitated his placement on a respirator to enable him to breathe. Brian's Funeral Liturgy at St. Bridget Church, Abington was a testimony to his courage and faith," Father Schmidt said.