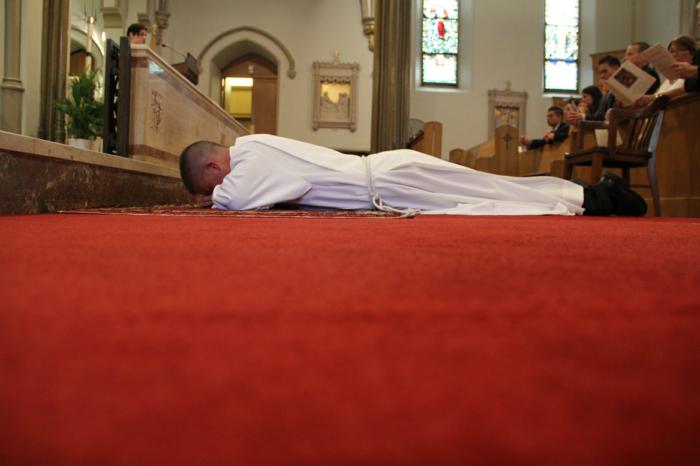 Tom Olson lies prostrate during the Litany of the Saints during his ordination Mass, July 25, at St. Columbkille Parish in Brighton. Pilot photo/Christopher S. Pineo

BRIGHTON -- Tom Olson reached a milestone in his 11-year journey toward the priesthood, July 25, when Cardinal Seán P. O'Malley ordained the 35-year-old to the diaconate for the Archdiocese of Boston at St. Columbkille Parish.

In formation with the Society of Jesus since 2004 to become a Jesuit priest, he realigned his vocation toward the calling of an archdiocesan priest in 2014. He enrolled at Pope St. John XXIII National Seminary in Weston that summer. Having spent so much time already in formation, he asked the cardinal if his ordination as a deacon could be moved forward and the cardinal agreed. Ordination to the diaconate put him on track for ordination to the priesthood next May, alongside his peers in formation now who will receive ordination as deacons in January.

With his ordination as a deacon, he entered a ministry of service.

"Jesus comes as the one who serves, the suffering servant who is meek and humble of heart. He wants his followers to have the same spirit of service and humility," Cardinal O'Malley said in his homily at the ordination.

One of three ordained ministries in the Church -- deacon, priest and bishop -- the deacon, from the Greek "diakonos," means servant or minister.

"I can only speculate as to why the Church has maintained the practice of ordaining men deacons before ordaining them priests. The Church could ordain them priests without first ordaining a man a deacon but probably the reason is to impress on us that ministry is above all service, humble service of the Lord and of His Church," the cardinal said.

He reminded Olson to keep his eye fixed on the presence of Christ in the Eucharist as the heart of his ministry.

He also reminded Olson of the last words of Mary in the Gospel "Do whatever he tells you." The cardinal said her example underscores the importance of obedience to Christ in discipleship and in the life of an ordained minister.

The cardinal also touched on elements of the ordination rite that took place after the homily. He called the stole Olson received a symbol of service like a towel shared by Jesus with the deacon.

"The greatest privilege we receive is the towel that Jesus entrusts to us to wash the feet of those we are called to love and to serve. Be a deacon -- a good and faithful servant," the cardinal said.

As the ordination continued, Olson lay prostrate on the floor before the sanctuary, to signify humble submission before God during the Litany of Saints. Reflecting on the rite afterward, Olson said the moment stood out for him.

"The Litany of the Saints is an invocation of our belief in life after death and, more importantly, that we intercede for each other, both in this world and the next. That's our Christian duty, so I in a certain sense felt the communities of saints, the communion of saints, were praying for and with me," Olson said.

The cardinal completed the ordination as he laid hands on Olson and proclaimed the prayer of consecration, to confer the Holy Spirit guide the new ministry.

With help from Dorchester priest Father Jack Ahearn and his mother Marsha Olson, Deacon Olson received and donned a stole and dalmatic -- which signifies the office of diaconate and the deacon's role in the celebration of the Eucharist. Before the rite ended with the Kiss of Peace from present clergy and the cardinal, Olson received a symbol of one of the duties the new deacon said he most looks forward to -- the Book of the Gospels.

Among the duties deacons take up in parishes, they may preside at baptisms, weddings and rites of Christian burial, assist the priest at Mass, proclaim the Gospel and deliver homilies. Olson said he most looked forward to preaching.

"For me the big exciting thing that I think about doing as a deacon is to preach. That's something that I have been burning to do," he said.

Olson said he could not forget to thank the Jesuits for their role in his formation. Over 10 years with the Jesuits, he spent three years at St. Louis University where he got a master's in Philosophy, lived in Spain for one summer and Krakow, Poland for another, and worked in fundraising and development for St. Francis Mission in South Dakota.

"I am grateful, excited, and dazzled by the thought of serving the Archdiocese of Boston for the rest of my life, but I also want to give credit to the Jesuits for the great formation that they gave me as well," he said.

In his time as a Jesuit, he also worked in parishes. During that time, he helped with a novena at various parishes in the archdiocese. After he arrived at St. Columbkille Parish in 2012, he helped start a young adult ministry that earned national attention. He said his experience at parishes and the grace of God led him to feel that the archdiocesan priesthood held his true calling.

"God seemed to be at work through these instances, which collectively were to me both a challenge and an encouragement," he said afterward.

He also thanked his parents Tom and Marsha Olson for the formation they gave him in the home.

"The vocation for me began in the home. If it weren't for my parents and their own faith, I wouldn't be here today. We're all vocation promoters, and I think parents in particular have to start asking that question of their sons and daughters," he said.