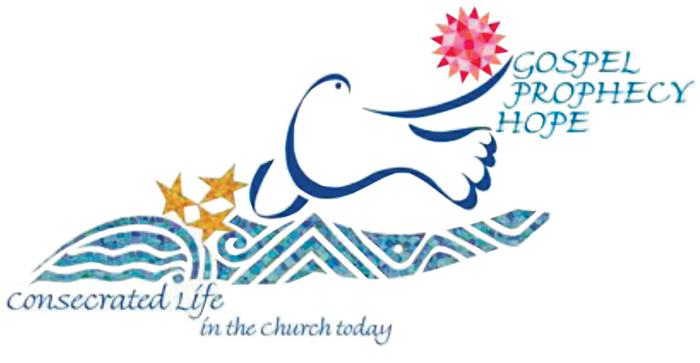 [Some of Elizabeth Lee's branches have already appeared on our pages; others will do so in coming weeks. She offers us a fine overview of the many different expressions of the Consecrated Life we celebrate this year. -- Ed.]

Pope Francis recently declared 2015 as the Year of Consecrated Life. What is Consecrated Life? It is a gift conferred by Christ when He calls a person individually to respond to His great love in a focused and permanent state of life recognized by the Church. Men and women, moved by the Holy Spirit, respond by living out their baptismal promises in an intimate way and follow Christ in total self-giving.

Twenty years ago I remember discerning my vocation and looking at the different forms of consecrated life. There are many ways to live it out; I was familiar with some of them, while others I had not heard much about. I decided to look into and visit various institutes until I found the vocation God was inviting me to, in a calling to live out my life as a Consecrated Virgin. An important Church document called ''Vita Consecrata'' (VC), as well as the ''Catechism of the Catholic Church'' (CCC), spell out the forms of consecrated life that have come to be recognized by the Church over the centuries. Probably the most well known form of consecrated life in our time would be the apostolic religious, such as the Franciscans, the Jesuits, or the Dominicans, yet there are seven forms of consecrated life within the Church:

1. Monastic life of the East and the West

The word consecrated comes from the Latin con- (expressing intensive force) + sacrare 'dedicate,' from sacer 'sacred.' Thus consecrated states in the Church are men and women who are set apart in single-mindedness for a life of love and service to God and his people. Each of these seven forms of consecrated life offers a unique contribution to the life of the Church.

1. Monastic life of the East began early in the Church. Monks sought peace, interior silence, prayer and assisted those who sought spiritual counsel. Western monasticism also dates back to early Christianity and grew under the inspiration of St. Benedict. ''Ora et Labora'' (prayer and work) highlights Benedictine monasticism. These men and women also live a life of meditation on the Word of God (lectio divina), the divine liturgy, manual work, and assisting others in spiritual direction.

2. Hermits, as noted in the Catechism, "devote their life to the praise of God and salvation of the world through a stricter separation from the world, the silence of solitude and assiduous prayer and penance." Hermits support themselves and live according to a rule approved by their diocesan bishop or under the leadership of a specific religious institution.

3. Members of Contemplative Institutes are also men and women consecrated to a life of hiddenness. Their ministry is one primarily of prayer, silence and community life within the seclusion of a convent. Through their lives of witness to the love of the Church for her bridegroom and their prayerful intercession, they contribute to the growth of God's children through their spiritual fruitfulness. Some of these contemplative institutes include the Carmelites and the Poor Clares along with more recent institutes such as The Holy Spirit Adoration Sisters.

4. Secular Institutes were first acknowledged by Pope Pius XII as a form of consecrated life in 1947. Members of these institutes live and work in the secular world and are committed "to the evangelical counsels by sacred bonds and observe among themselves the communion and fellowship appropriate to their particular secular way of life." They share in the task of evangelization "in the world and from within the world" where their presence acts as "leaven in the world." There are more than 30 secular institutes in the U.S. each with its own lifestyle and rule. Examples include the Apostolic Oblates and the Missionaries of the Kingship of Christ.

5. Societies of Apostolic Life are those who come together for a specific purpose such as teaching, health-care, retreat work, advocacy for justice and so on. Almost all apostolic societies had their origins from a necessity that their founders recognized. They live in common without religious vows. Examples include the Oratory of St. Philip Neri and the Daughters of Charity of St. Vincent De Paul.

7. Consecrated Virginity lived in the world dates back to the early Church. The Rite was restored in 1970 as a distinct form of consecrated life for women. In ''Vita Consecrata,'' Pope John Paul writes: "It is a source of joy and hope to witness in our time a new flowering of the ancient Order of Virgins, known in Christian communities since apostolic times. Consecrated by the diocesan bishop, according to the solemn liturgical rite, these women acquire a particular link with the Church, which they are committed to serve while remaining in the world." The consecrated virgin does not live in community, works to provide her own sustenance, and is committed to regular prayer including the offering of the Liturgy of the Hours each day. Her vocation is not so much about what she does but who she is in embodying the love of the bride, the Church, for Christ her heavenly Bridegroom through a life of prayer, work and attentiveness to those in need. The consecrated virgin seeks to imitate the Virgin Mary, who lived in the world, bringing Christ to a broken world and bringing the broken world to Christ.

The Catechism, hearkening back to the Psalms, summarizes consecrated life as "a tree, planted near running water that yields its fruit in due season." This tree has many branches. Each branch grows its own unique fruit, extending Christ's mission of giving glory to His Father, and promoting the Kingdom of God.

Elizabeth Lee was consecrated in the Order of Virgins in 1995 under Canon 604 of the Code of Canon Law by Fall River Bishop Seán O'Malley, OFM Cap. She is a graduate of Roger Williams University and works as a media manager at the National Catholic Bioethics Center. She has served as Secretary of the United States Association of Consecrated Virgins and has been a guest on the North American Catholic Educational Programming Foundation television network and featured on ABC's Nightline discussing the vocation of consecrated virginity.