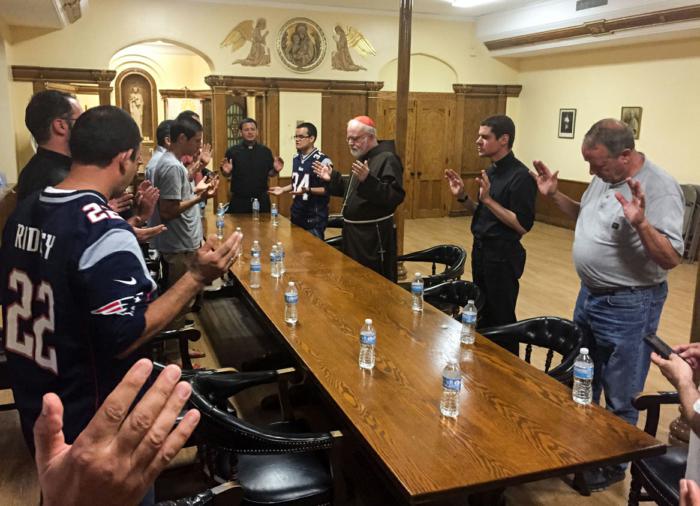 (Evangelizing) groups came to all four dioceses of Massachusetts and we had seven pairs of men visit the archdiocese of Boston. As their journey was coming to an end, I met with several of them at the Cathedral to hear how it went. Photo courtesy/CardinalSeansblog.org

We learned with great sadness yesterday that, William Cardinal Baum, the former Archbishop of the Archdiocese of Washington, had passed away. In addition to his ministry in Washington, he had been the former Prefect of the Congregation for Catholic Education and the former Grand Penitentiary.

Cardinal Baum came to Washington in the 1970s, at a time when there was great conflict in the archdiocese and chose for his motto Ministerium reconciliationis, "The ministry of reconciliation." His motto reflected his gentle and kind pastoral approach, which was a very important means of healing many divisions in the archdiocese.

At the time I was at the Centro Catolico and he was very supportive of Hispanic ministry, allowing us to organize and expand pastoral services to the newly arriving immigrants throughout the archdiocese. He was also very supportive of the Hispanic newspaper "El Pregonero," the Hispanic diaconate program and many other initiatives that responded to what was really the beginning of an enormous wave of Catholic immigration into the Archdiocese of Washington.

For the last few years he had been living at the house of the Little Sisters of the Poor on Harewood Road in Washington, very near Catholic University. He was a very dear friend and I was always happy to see him.

In the last couple of years he's been more limited in his mobility, but I would occasionally be able to visit him and he was always very engaged and interested in everything that was happening in the Church. He was a very cultured gentleman who was very much committed to the intellectual life of the Church and very much involved in ecumenical outreach to other churches.

Mayors' Conference at the Vatican

Also this week, a conference was held at the Vatican with mayors and local government officials from throughout the world on the problems of climate change and human trafficking.

The conference, "Modern Slavery and Climate Change: The Commitment of the Cities," was held by the Pontifical Academy for Social Sciences. On this Academy they have established experts -- Catholics and non-Catholics alike -- who study different themes that have an ethical and social dimension.

We are very happy that Mayor Marty Walsh of Boston was able to represent us at this gathering.

It is ironic that some people see faith as being in contrast to reason and science. Instead, throughout history, the Church has always been a leader in trying to promote scientific knowledge and discovery. This Vatican Academy continues in that same tradition, trying to promote science and ensure that scientific genius serves the common good and is not used for selfish or violent ends.

As we have commented before, when the Holy Father's encyclical Laudato Si' came out, the Holy Father makes a very clear connection between the situation of the poor in the world and the fragility of the environment. The conference held this week in Rome reflects those themes that are so well delineated in that encyclical.

Within the Holy See, there is a very strong awareness that the population of the world is very quickly moving from rural areas into large metropolitan cities. There have been many conferences on the issue, including when I was invited to address in Milan on evangelizing the cities. So, we shouldn't be surprised that the Holy See, particularly this type of Academy, would reach out to mayors of major cities to invite them to be part of this reflection on these themes.

Evangelizing two by two in Boston

Having just had the (Sunday) gospel that morning about the apostles coming back two-by-two and telling Jesus their experience, later that day I had a living experience of much the same thing.

Over the previous ten days or so, following the example of the apostles in the gospel, 800 members of the Neocatechumenal Way had fanned out two-by-two throughout the United States to announce the Good News wherever they went. They came without money or possessions, just depending on upon God's providence, as the gospel had said the previous Sunday.

Groups came to all four dioceses of Massachusetts and we had seven pairs of men visit the archdiocese of Boston. As their journey was coming to an end, I met with several of them at the Cathedral to hear how it went.

It was interesting to hear their experience, even in some cases an experience of homelessness and living with homeless people. I was impressed that some reported back how kind the homeless people were to them, and that there was a charity among the very poor they had not been aware of before.