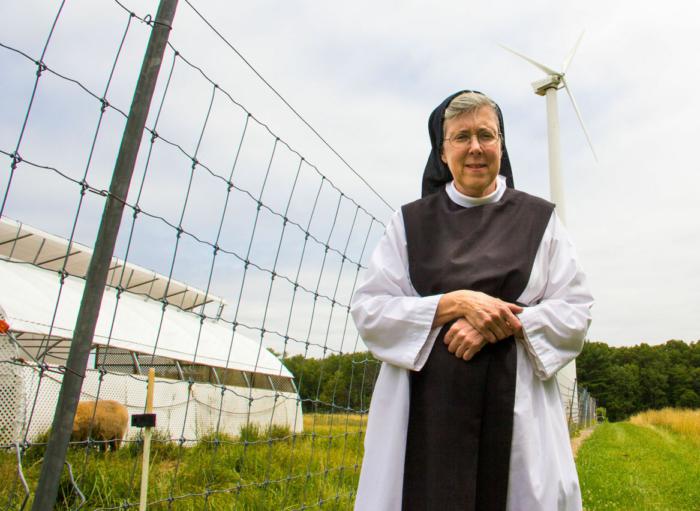 WRENTHAM -- Pope Francis broke ground with his encyclical on the environment "Laudato Si'" in May, but the tradition of sustainable and even "green" living has deep roots in the life of the Catholic Church as evidenced by a local community of Trappistine nuns.

The Trappistine Sisters of Mount St. Mary's Abbey built a reputation around the candy produced to sustain their community in Wrentham through sales, but the community takes the core of its way of life from a tradition that dates back to their medieval roots and reflects in their formal name, the Order of Cistercians of the Strict Observance.

Sister Marianne Garrity gave The Pilot a tour of the grounds of the abbey, July 18, which featured the renewable and sustainable resources that the community uses.

The Order of Cistercians of the Strict Observance have their roots in France in 1098, when St. Robert of Molesme set into an uninhabited part of the French countryside that would come to be called Citeaux. The 21 monks who accompanied the saint helped found Citeaux Abbey and took up a life of strict commitment to a form of traditional monasticism called the Rule of St. Benedict. The order established the first abbey of Cistercian Nuns, who committed themselves to the monastic life of the Rule. Chapter 66 of the Rule dictates that communities become self-sustaining apart from the outside world.

Founded in 1949, the abbey in Wrentham developed into a self-sustaining community through work of the hands of the sisters living there -- another element specified in the Rule.

"It was the first foundation of Cistercian women in the United States," Sister Marianne said.

The land functioned as an agricultural resource and over time new resources became available to make the community more self-sustaining and sustainable through renewable energy and natural resources.

At one time the abbey had cows on site, but the required milking created a conflict with the prayer life of those in the monastery. The abbey sold the cows and purchased sheep instead. The sheep's wool, a renewable resource because it grows back seasonally, can be used to make yarn sold at the gift shop.

The women who had milked the cows in the '50s noted that the high point of the local area, a hill where the sheep live now, experienced a great deal of wind. They thought of building a wind turbine.

The project would materialize in 2005 after Mother Agnes Day, abbess at the time, returned from a visit to Portsmouth Abbey. She asked Sister Marianne to investigate the addition of a wind turbine to the hill. After a feasibility study funded by a grant from the Massachusetts Technology Collaborative the abbey moved forward with the project.

The wind turbine was commissioned in 2009 and has produced about a third of the power for the community since.

"All of its parts are made in the United States. The rotor and the nacelle -- which is the housing behind where the blades are -- is where all the gizmos are that make it work. The wind energy is mechanical energy at the top. It's converted into electrical energy. It comes down the tower. The electric lines are right underneath us," Sister Marianne said.

Some of the energy contributes to the grid for which the abbey gains a credit.

With the construction of solar fields in 2013 and 2014, the abbey added another resource to help sustain the community, but the energy generated by the solar panels didn't go to the abbey itself. Instead the Town of Franklin purchased a long-term supply of energy from the abbey with some of the power going to the grid. Renewable energy project developer, Kearsarge Energy LLC of Watertown, leased the land until 2033, which now generates revenue for the abbey.

"With that income on which we can rely we can do some projects that we have not been able to do before. For instance, this summer we are replacing a lot of the original 1940s and '50s doors and windows, which were just very energy inefficient," she said.

The candy production itself also has a sustainable component in a geothermal system that heats and cools the on-site chocolate factory built in 2011.

But, while environmentally conscious, the motivation to install the geothermal system went beyond temporal concerns.

"We just didn't want heating and air conditioning units just like McDonald's on the top of our new candy building and also because silence, and the silent atmosphere is important to us. And that sense of solitude, that would be destroyed," she said.

Chapters of the Rule pay particular attention to that sense of solitude and silence during meal times in the monastic life. Whereas Chapter 38 of the Rule dictates reading aloud during meals instead of talking, the nuns added "Laudato Si'" to be read evening-by-evening in the coming months.

Sister Marianne said the encyclical held particular appeal to the nuns of the abbey.

"I think the thing that we like very much is that the sustainability goes hand in hand with the spirituality," Sister Marianne said.

She said that combination happens in the daily prayer life of the nuns and the sustainability of the abbey.

"We gather in church seven times a day, and we pray and we bless the Lord of Creation, and we can see that the efforts at sustainability also Bless the Lord in a different way," she said.