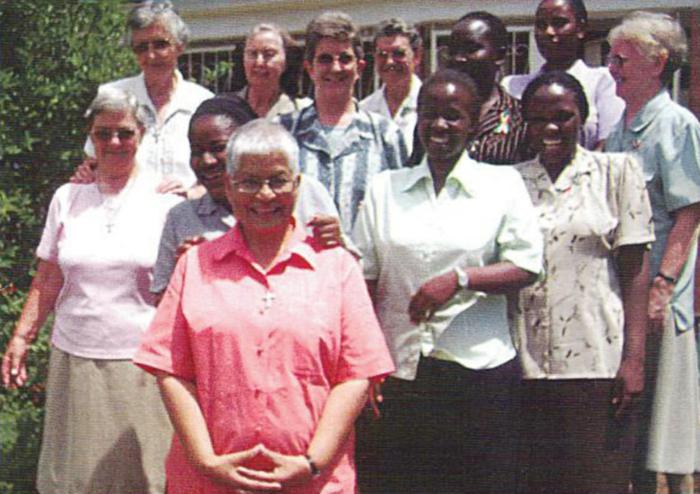 The Franciscan Missionary Sister for Africa began in 1903 in Uganda when Mother Kevin and five companions took the risk to leave country, family and friends and accepted the invitation to the unknown -- the beginning of a missionary venture that spanned oceans and cultures, binding peoples of Asia, Europe, North America and Goa in the great adventure of living the Gospel.

Inspired by her spirit and leadership, schools, hospitals, clinics and training institutes were established in Uganda, Kenya, South Sudan, Ethiopia, Zambia, Zimbabwe and South Africa. Mama Kevina, as she was known, was one of the great missionaries of her time. She was foundress, educator, builder and a promoter of Mission across three continents. Her care for those suffering from the once dreaded disease of leprosy is legendary in Africa and her undaunted efforts in the midst of great hardship earned her the title "Flame in" bush. She was a woman of vision. With her Sisters, she pioneered the education of African women as Religious Sisters, Nurses, Midwives and Teachers. Though a loyal daughter of the Church, she sailed close to the wind in studying Midwifery before Canon Law could permit it as a fitting ministry for Religious.

The spirit and vision of Mother Kevin continues today. Through Mother's inspiration and the inspiration of many other Missionaries, the African Continent has developed in the areas of education, medical, spiritual and pastoral needs. Although much has been accomplished, the needs continue to be many.

In 1953 at the invitation of Cardinal Cushing, Mother Kevin with Sisters Annunciata, Bruno, Elizabeth, Walberga and Mildred opened a House in Brighton on Foster Street. Although the House was primarily for fundraising, it was and still is a receiving house for young women, who desire to become a Missionary in Africa and a place for the Sisters on home-leave.

On the 18th of October 1957 Mother Kevin died in Boston. The night before her sudden death, Mother was visiting a neighboring parish, speaking of Africa, the great needs of the Church in Africa and of her beloved African people. On hearing this news of Mother Kevin's death, the Ugandan people demanded "Bring our Mother home to us. Every chief has his second burial." To her own Franciscan Sisters, to whom this demand was made, it seemed impossible without the financial assistance of the Ugandan people. A public appeal was opened, donations were received from all classes and creeds: from the Kabaka, King of the Buganda, his ministers and from the poor; from Muslim Sheiks and Hindu businessmen to sweepers and barrow boys in the market. All had enjoyed her friendship, her love. She transcended race, creed, color, politics and status. Mother Kevin loved dearly and was loved dearly in return. She gave and she received even more abundantly than anyone could dream.

In the spirit of Mother Kevin, the Franciscan Missionary Sisters for Africa continue today in Uganda, Kenya, South Sudan, Zambia and Zimbabwe. If you would wish to read more about the FMSA, contact www.fmsa.net.

Sister Mary Fisher, FMSA was missioned in Africa for 41 years -- Uganda, Ethiopia, Kenya and South Africa. For most of these years she was involved in a spiritual ministry. During Sister Mary's final 14 years in South Africa she was facilitating two year training programs in Spiritual Direction on an ecumenical basis.