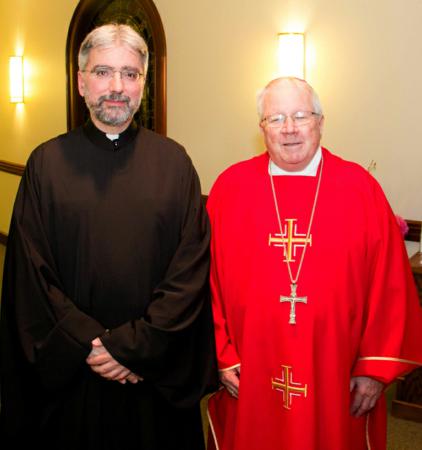 BRAINTREE -- The Archdiocese of Boston and the Greek Orthodox Metropolis of Boston continued a shared ecumenical tradition, June 29, as a Greek Orthodox ecumenical delegation visited the Pastoral Center in Braintree for the Mass of the Feast of Sts. Peter and Paul.

Since 1996, the archdiocese has invited the Orthodox to celebration of the feast of Sts. Peter and Paul, patron saints of the Church of Rome, while the Greek Orthodox Metropolis of Boston receives the cardinal or a representative for the celebration of the Feast of St. Andrew, the patron of Constantinople. In recent years, the cardinal or an auxiliary bishop of the archdiocese has also attended the Easter vigil at Annunciation Greek Orthodox Cathedral of New England.

"On the Feast Day of Peter and Paul, the Catholic and Orthodox Churches honor the witness of these great saints who answered the command of the Lord 'follow me,'" Father Tonias said.

"We also recognize in our contemporary experience Pope Paul VI and Patriarch Athenagoras who also responded to this call, and brought the ancient sees of Rome and Constantinople closer together. Their witness is an important one, as our witness here today is an important one, because it demonstrates that we too are listening to that holy voice that asks that all be one even as Christ is one with the Father," Father Tonias said.

Bishop Kennedy took an opportunity before the final blessing "to extend from our cardinal to His Eminence Metropolitan Methodios our greetings on this day, and especially we bring also our prayers and good wishes to the members of the Cathedral of the Annunciation on our behalf, so that we are as brothers and sisters continuing to pray for one another."