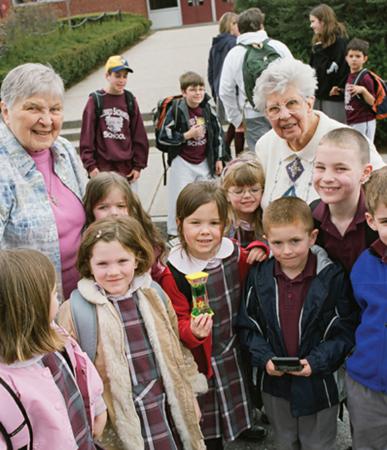 Sisters Rosemary Matt, OSF and Sister Frances Will, OSF were a familiar presence in the halls of Blessed Sacrament School in Walpole [1968-2007]. Photo courtesy/Susie Fitzhugh

The Sisters of St. Francis of Philadelphia is a congregation of approximately 450 Catholic religious women who choose a Gospel way of life lived in community and uphold a long and honored tradition of loving God and being in relationship through loving service. It is the mission of the sisters to be committed to the needs of others, especially the economically poor, the marginal, and the oppressed. Choosing to live the Gospel in the prophetic spirit of Francis of Assisi and our foundress, Mother Francis Bachmann and with Jesus Christ as Brother, we live as sister with one another, with the entire human family, and with all creation. Calling ourselves and one another to continuous conversion of heart, we commit ourselves to a life of contemplation, poverty, and humility.

As vowed women of the Church, we respond with diverse gifts in a spirit of collaboration and mutual service to the needs of others, especially the economically poor, the marginal, and the oppressed. Seeking to participate in the Spirit's action in the world, we direct our personal and corporate resources to the promotion of justice, peace, and reconciliation. As Sisters of St. Francis, we are willing to take the necessary risks to be a healing, compassionate presence in our violent world, especially for women, children, and those who have no voice.

On April 9, 1855, Mother Francis Bachmann founded the Sisters of St. Francis of Philadelphia. Her legacy includes her inspiring counsel which is still relevant today. She advises her sisters: "no risk...no gain," and "as long as God does not stop giving to us, we shall not stop giving to the poor." Mother Francis's ideals remain as a challenge and an inspiration to all who continue the journey of the Sisters of St. Francis of Philadelphia.

An immigrant from Bavaria, Germany, Maria Anna Boll Bachmann (later known as Mother Francis) became a widow with three children and was pregnant with a fourth child when her husband Anthony was mortally wounded by Nativists in Philadelphia, Pennsylvania in 1851. To support herself and her young family, Anna operated a small shop and hostel for immigrant women while her sister, Barbara Boll, sewed for a tailor. Both Anna and a young guest in the hostel, Anna Dorn, a novice in the Franciscan Third Order Secular, concurred with Barbara's wish to found a Franciscan religious congregation. They sought the advice of Father John Hespelein, CSSR., who wrote to Bishop John Neumann, then in Rome. Bishop Neumann had asked Pope Pius IX for permission to bring German Dominican Sisters into his diocese but was advised by the pope, also a member of the Franciscan Third Order Secular, to establish a congregation of Franciscan sisters in his own diocese. Seeing God's hand in the letter and the advice, Bishop Neumann instructed the women, provided spiritual guidance, and accepted them into religious life. On Easter Monday, April 9, 1855, the bishop invested the three founding members in the habit of St. Francis, giving them new names.

The Sisters of St. Francis first arrived in the Archdiocese of Boston in 1891 when our sisters were called to staff St. Francis Home in Roxbury. We remained on staff until 1966. Additional ministry in the diocese included staffing Holy Trinity Elementary and High School (1913-1961), South End, Boston; Our Lady of Assumption School, Lynnfield (1961-present), and Blessed Sacrament, Walpole (1966-2007).

Additionally, from 1968-1975, Sister Francis Georgia Vicente, OSF, was a key player as liaison and advocate for the Spanish-speaking population of Boston for both the archdiocese and the city. She was involved in planning, lobbying, and establishing services and agencies and was named to the first Board of Education formed in 1969 by Cardinal Cushing.

Where we are today

Currently, Sister Josephine Marie Harty, OSF serves in the archdiocese in education ministry at Our Lady of Assumption School in Lynnfield. She is joined in the area by Sister Ursula Tisdall, OSF who is currently a volunteer for the Archdiocese of Boston diocesan offices as well as a volunteer in parish ministry at St. Matthew Parish in Southborough in the diocese of Worcester.

Along our journey, the Sisters of St. Francis have sought to be faithful to Mother Francis' goal of serving the people of God wherever a need existed. Today our sisters minister in the United States in approximately 19 states as well as in Haiti, Ireland, and Africa. We serve in a variety of ministries and settings: prayer ministry; healthcare; education at all levels; parish and diocesan ministry; spiritual and pastoral care; service to the elderly, the homeless, the poor, persons with AIDS, and immigrants and refugees; counseling; advocacy; and leadership in national religious organizations.

Although changing circumstances in society and in the Church have inspired the Sisters of St. Francis of Philadelphia to find new ways of proclaiming the Good News of God's faithful presence in the world, their mission has remained constant: to live the Gospel message in the unique spirit of St. Francis of Assisi, faithful to the vision of Mother Francis Bachmann. Accompanying our sisters on this journey are Franciscan Companions in Mission -- more than 400 Christian women and men who share in and live out the spirit and mission of the congregation within their own vocation and lifestyle.

Florence Smith is the Director of Communications (fsmith@osfphila.org or 610-558-7726) at Our Lady of Angels Convent in Aston, Pennsylvania. www.osfphila.org.