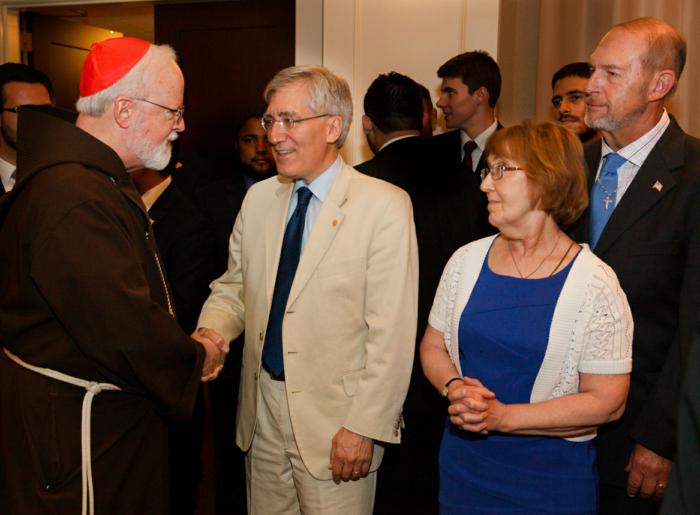 NORWOOD -- As the Redemptoris Mater Seminary of the Archdiocese of Boston's Sixth Annual Gala Dinner celebrated a renewal in the Church brought on by Blessed Pope Paul VI, June 14, the rector announced a renewal for the seminary in the form of a planned expansion.

Vocations pursued at the Redemptoris Mater seminary arise from the Neocatechumenal Way, an international itinerary of faith formation within the Catholic Church. Boston's Redemptoris Mater Seminary was established on Sept. 11, 2005. The seminary takes as its primary mission the formation of priests to serve in the new evangelization in Boston and throughout the world.

In explaining the need for expansion, the seminary's rector, Father Antonio Medeiros compared the seminary to a growing family.

"As so often happens with families who initially after getting married begin to live in a small house and then, especially with the arrival of children, need to move to a larger place -- sound familiar? So our seminary, after spending the last nine years in the former rectory of St. Lawrence Church in Brookline is now in urgent need of a larger place. This is why I am very happy to announce tonight that, after long and intense discussions and various preliminary studies conducted over the past year, we are ready to proceed with the building of an extension to the Redemptoris Mater Seminary on the grounds of St. Lawrence Church," he said.

He also looked to the future of the seminary as a place that works to produce saints in keeping with the vision of the Church.

"I don't know what you think, but I think that the world around us longs to see joyful priests who are happy to spend their lives in service to God and to the Church. Think of your children and of how different their lives could be if they suddenly met today the likes of St. Francis, St. Dominic, St. Anthony walking the streets of Boston and chatting with them," Father Medeiros said.

A video shown during the evening highlighted the work of Blessed Pope Paul VI as the world encountered teachings of the Church renewed through the Second Vatican Council.

The gala's keynote speaker addressed the challenges facing the Church in the secularized environment that has come about in the ensuing years.

As Robert P. George, a Princeton professor and Chairman of the U.S. Commission on International Religious Freedom, took the podium for his keynote he first congratulated the seminary and the rector.

In his keynote, George, said secularism makes no place for people of faith and pushes for silence on important issues.

"I want to say that the days of socially acceptable Christianity in the United States and throughout the West are over. Things will no longer be the way they were when I was a child, or certainly when my parents were children. The days of comfortable Catholicism are passed," he said.

"Secularism is bearing down very hard on our culture and on believers, especially parents who are trying to raise children to be people of faith," he said.

George called the messages children face from the media, the educational establishment, and the entertainment industry a "barrage" against the faith of believers across religious traditions attempting to pass faith to the next generation.

"That requires that we cooperate across the historic lines of religious difference. There is every reason today for Catholics to be cooperating with our friends in the Evangelical, Orthodox Jewish, Mormon and Muslim communities, and other people of faith who are facing exactly the same challenges that we are facing," he said.

In spite of the pressure, he urged that the faithful push back and stand up for their beliefs.

"Remember what the Gospel says itself about being a Christian. Remember what Jesus says. What does he say? Let me quote him. 'If anyone wants to be my disciple, let him take up his cross and follow me.' That's a tough teaching, isn't it?" George asked.

He said Christianity always struck him as a having a unique place amongst religions as it called for conversion, not for riches or fame, but for the honor and dignity of taking up the cross to follow Jesus Christ.

"Only a true religion can make such a crazy claim and make it work," he said.

He also answered the charge that Catholics, and other people of faith, who hold to traditional social values will find themselves on "the wrong side of history."

"This idea of a judgement of history is secularism's vain, meaningless, hopeless, and pathetic attempt to devise a substitute for the final judgement of almighty God," he said.

George received the seminary's evangelization award alongside John A. Zofchak, who established Boston Salads in 1991 and has supported the work of the seminary.

In his remarks, Zofchak spoke about the announced plan of expansion for the seminary.

"I think the fact that it's so greatly needed is a sign that there must be a lot more young men going to the seminary. I think that's great news for the entire faith," he said.

Before the final blessing seminarians played guitars and sang for guests and Cardinal Seán P. O'Malley, who gave the closing remarks of thanks.

"I do want to say how proud we are of all of our seminarians, and say how grateful we are to Father Medeiros and the staff of Redemptoris Mater for the fine work that they do there. Please express our gratitude," the cardinal said, as applause filled the room.