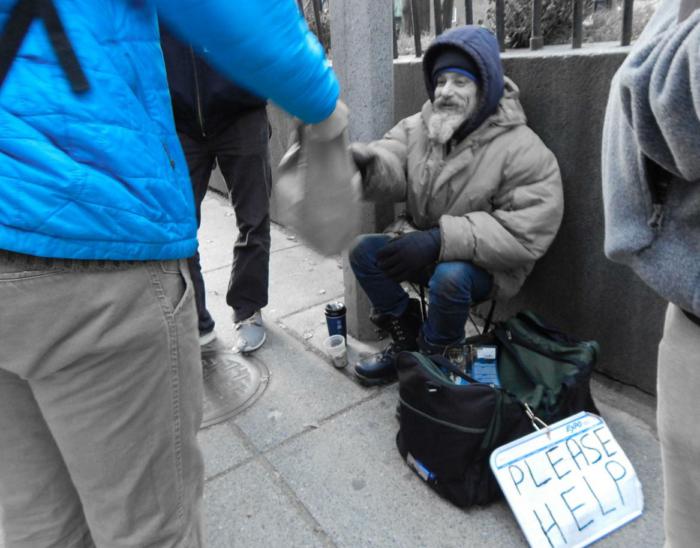 "I have found that I look forward to Thursdays, not because it's almost the end of the week or because Friday is right around the corner," Murphy wrote in a reflection piece posted on his school website, "but because I am able to go out to the Boston Common with friends to serve and talk to my other friends I have made through my service on the St. Louis Project."

"The St. Louis Project is a wonderful project begun at our school four years ago," explained campus minister Jessica Meyer. Every week, close to 90 juniors and seniors meet after school in the cafeteria to make sandwiches and assemble brown-bag meals. After a prayer service, these students ride the MBTA to the Boston Common, where they break into smaller groups of four to six students, led by either a student leader or a faculty volunteer. There, they not only distribute the food they have prepared, they also speak with and get to know Boston's homeless population.

"The St. Louis Project is really about the conversations," Meyer explained. "It's about giving these people the recognition they deserve as human beings."

"The whole idea is to develop relationships," Meyer added. "This is really a ministry centered around being present for others ... Every single time I go, I marvel at how open the students are, how non-judgmental. I really am honored to see them."

"(The St. Louis Project) isn't just a sandwich-making club," echoed Murphy. "We go out and talk to the people. We really get to know them."

Murphy, 17, first became involved in the St. Louis Project at the urging of a friend.

"I was always interested in service projects, and so I thought I'd try it," he recalled. "I fell in love with the work right then and there."

His involvement in the St. Louis Project also led Murphy to become involved in another program Boston College High School participates in -- the Lazarus Project. The Lazarus Project, run by St. Anthony Shrine in downtown Boston, provides funeral services for the poor, the homeless and those who have no family to bury them.

Boston College High School students, such as Murphy, serve as the pallbearers for these funerals.

"That has been a really powerful experience for me," Murphy said, noting that this year he has participated in two funerals.

"It is heartbreaking for me to know that these people would have no one there for them," he said. "So, for that day, we are their family. We are there for them."

For Murphy, these experiences have cemented in him a desire to help the poor as an adult. He hopes to study medicine, and to be able to minister to the poor as a physician. He credits Boston College High School for creating a "great sense of community," and for stressing the importance of ministering to others.