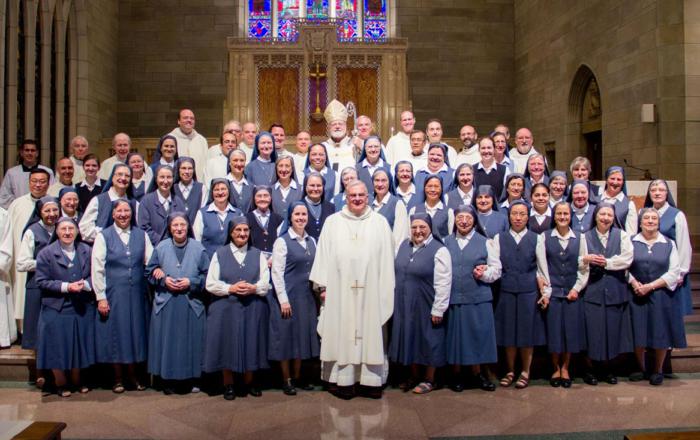 WEST ROXBURY -- Cardinal Seán P. O'Malley celebrated a Mass of Thanksgiving to mark the centennial of The Daughters of St. Paul, June 14, at St. Theresa of Avila Church in West Roxbury.

Founded in 1915 as part of the Pauline Family, the Daughters of St. Paul have reached 2,500 members in 51 countries working to "communicate Christ through all forms of media."

"It's with great joy, in the midst of this beautiful Year of Consecrated Life, that we gather to mark the anniversary," the cardinal said in his homily.

"The congregation of the Daughters of St. Paul is part of this wonderful, worldwide Pauline Family, one of the 10 institutes founded by Blessed James who was assisted in this extraordinary task by the Venerable Mother Thecla Merlo," Cardinal O'Malley said.

In 1915 Blessed Alberione met Teresa Merlo at a church in Italy. Merlo would take the name Mother Thecla Merlo, as the foundress of the burgeoning Daughters of St. Paul. By 1918, under their guidance, the first Daughters of St. Paul took charge of its first diocesan newspaper.

"They were a team, like Francis and Clare, who worked closely to nurture this new charism from the heart of the Church," the cardinal said.

Blessed Alberione based his work on a vision he had as a young seminarian in northern Italy at the cusp of the 20th century.

Blessed Alberione entered Eucharistic Adoration on Dec. 31, 1900. During adoration, he received a vision of a "particular light" from the Host that invited all people to Christ.

He emerged with a plan of spreading the Gospel through the means of human ingenuity at the dawn of the new century -- to the people of the new millenium.

"The inspiration for this new spiritual movement is St. Paul, the apostle who Blessed James called the theologian and architect of the Church," Cardinal O'Malley said.

As St. Paul had used parchment, pen and ink, the Society of St. Paul would use the press, radio, cinema, and television.

"Paul preached the Gospel to thousands of people in many different countries. In so doing, he experienced so many hardships and so many obstacles. When he could not profess in person with a community of faith, he writes to them," Cardinal O'Malley said. "Paul even writes some of his letters while he was in chains and imprisoned. Blessed James Alberione felt the same passion for evangelization. He said if St. Paul were alive today, he would be using all of the means possible to communicate the word of God and the joy of the Gospel."

The Pauline Sisters arrived in the United States in 1932, with media experience that would come to benefit the Archdiocese of Boston.

In 1953, four Daughters of St. Paul opened a convent on Greenleaf Street and a St. Paul Catholic Book and Film Center on Washington Street in Boston.

In 1956 the superior moved the community from Derby, N.Y. to Boston at the invitation of Cardinal Richard J. Cushing. The Daughters of St. Paul established their novitiate and publishing house in Boston in 1959. The sisters, novices, and postulants took up residence in a convent in Jamaica Plain, which would eventually become the provincial headquarters and novitiate for the U.S. and English-speaking Canadian province, as well as the publishing house for Pauline Books and Media.

The Daughters of St. Paul now also have a Pauline Books and Media Center in Dedham.

The Daughters of St. Paul reach out to the world via all forms of media across the spectrum of traditional and new media -- from magazines and books to e-books, from television to social media, and from the internet to the developing world of mobile apps.

"Today we know that one of the gifts we must treasure is the gift of consecrated life. The witness and ministry of the Daughters of St. Paul is a wonderful manifestation of that Gospel love," Cardinal O'Malley said.

After the Mass, guests were invited for a reception in the St. Theresa of Avila Parish hall.

Various communities of religious and priests, including local Institute of Jesus Priests and Sister Disciples of the Divine Master, came to celebrate with the Daughters of St. Paul.

Over the years, the work of the Daughters of St. Paul has touched many other religious communities, including a community founded in 2008 with the help of the Pauline Sisters -- the Maronite Servants of Christ the Light in Dartmouth.

"The Pauline Sisters are actually good friends, because when Mother Marla Marie L. founded and started this community, she actually stayed at their mother house for a number of years while she was beginning our community. So we have a very good relationship with the sisters. We're really here to support them, congratulate them, and be a part of this beautiful celebration," Sister Therese Maria, of the Maronite Servants of Christ the Light, said.

Speaking with The Pilot at the reception, provincial superior Sister Mary Leonora Wilson reflected on the anniversary celebration.

"What has been standing out for me, and it was the same in this Mass, is immense gratitude to God for the way he guides His Church and the way He has guided us in these hundred years. To see all these people coming together from across the diocese -- priests, religious, laypeople -- everyone who in some way is associated with us and rejoices with us was very moving" she said.