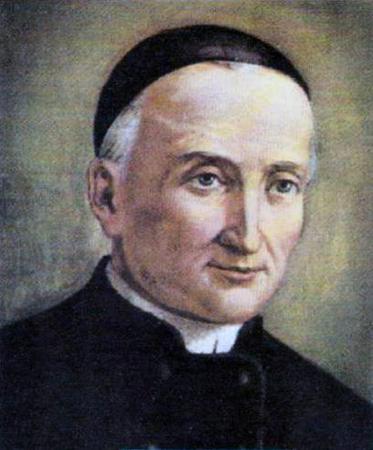 He founded the Stigmatines on Nov. 4, 1816, using an expression from the Formula of St. Ignatius of Loyola, to offer a competent ministry of the Word of God. The Community worked out this broad openness of service as evangelizing, teaching and preaching, furthering vocations to the priesthood or consecrated life and youth ministry.

St. Gaspar was a great student of the saints: adapting as the original constitutions for his community, the Jesuit, Father Francis Suarez's classical commentary on the Constitutions of St. Ignatius of Loyola. The Stigmatine Founder ardently recommended for his followers the study of the works of St. Thomas Aquinas and St. Alphonsus Liguori. He hoped his followers would be well versed in the popular Italian catechism of the times, written by the Jesuit St. Robert Bellarmine -- as he hoped that Stigmatines of every juridical level would be committed to this ministry, much in the line of Pope John Paul's II marvelous exhortation on the importance of catechesis [Catechesi Tradendi]. The church where the Stigmatines were founded in Verona, Italy, was dedicated to the Stigmata of St. Francis of Assisi, from which the original title of the Community came. St. Gaspar was much devoted to the healing wounds of the Stigmata [cf. Isaiah 53:5; II Peter 2:3, ff.] and the Benedictine ideal of fraternal community.

When the Stigmatines moved into their first home on Nov. 4, 1816, they noted over the main altar a painting of the Holy Espousals of Mary and Joseph, celebrated on Jan. 23, as an early Franciscan Feast -- today it is the Stigmatine Patronal Feast. Father Gaspar himself came from a broken home, and all his life he yearned for a kind of familial charity, which he hoped his community would cultivate. The Espousals was not merely a devotion for St. Gaspar but a way of life. He hoped that all Stigmatines would manifest total commitment to God's will in deferential service to the Bishops of the Church, which is the Spouse of Christ -- the same deferential service that Mary offered to Jesus and St. Joseph offered to Mary.

For more than 30 years of his life, St. Gaspar Bertoni would be classified as an invalid, badly damaged from a disease contracted as a young priest, called "miliary fever" -- that debilitated him for the rest of his life. Every Friday for many years, St. Gaspar preached a devotion honoring the Five Wounds of the Lord. St. Gaspar was much moved by both aspects of the Stigmata -- as they were inflicted on Good Friday, and as the source of our salvation [with particular emphasis on the open side of Christ -- John 19] and as manifested to the Apostles on Easter night sending them on their apostolic mission: "As the Father sent Me, so now I send you!" [John 20]. The Gospel of the modern Mercy Sunday, the Second Sunday of Easter, epitomizes quite well the Stigmatine Titular Devotion.

The Stigmatines came to Massachusetts in 1907, during the period known for its many immigrants (1850-1950). The Stigmatines served for many years in three Italian personal parishes: St. Francis of Assisi and Holy Family, both in Lynn and Sacred Heart in Waltham. The Houses of Formation were conducted on Lexington Street in Waltham and at Elm Bank estate in Wellesley, on the South Natick line. Presently the Stigmatines serve at the Espousal Center in Waltham. The second centenary of the Congregation will be observed next year.

Father Joseph C. Henchey, CSS, STD a Woburn native, was ordained a Stigmatine Priest in Rome, Italy, on July 1, 1956. He has served in academic and pastoral assignments in Rome, Italy; Ill.; N.Y.; and locally at Pope St. John XXIII Seminary in Weston. He manages a website about the Stigmatine founder st-bertoni.com.