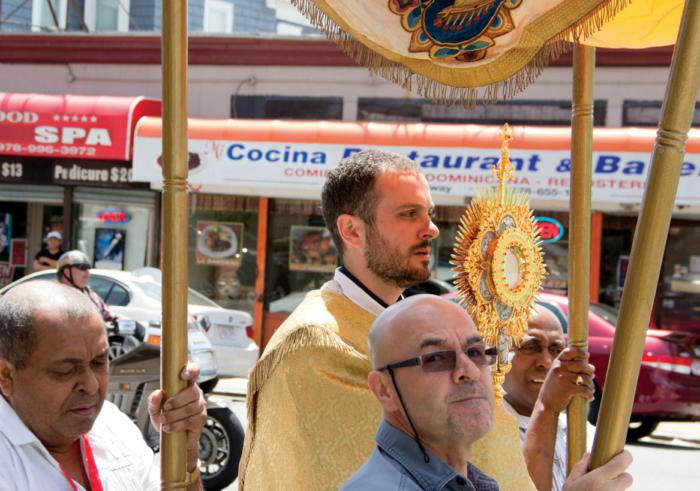 LAWRENCE -- Catholics all over the Archdiocese of Boston processed through the streets in public witness to honor Jesus Christ in the Eucharist, June 7, as they celebrated the Feast of Corpus Christi.

"It's a feast in which Catholics are invited to focus this day, and hopefully the days ahead, on the reality of the Eucharist, which is the center of our faith," said Father Paul B. O'Brien, pastor of St. Patrick's Parish in Lawrence, after a procession there.

Created in 1246, the feast day is traditionally observed on the Thursday after Holy Trinity Sunday, but in the United States the feast is celebrated on the following Sunday.

Pope Urban IV created the Solemnity of the Body and Blood of Christ, and ordered the celebration annually as the result of 13th-century visions by St. Juliana of Mont Cornillon.

Born in what is now Belgium in 1193 and orphaned at a young age, the saint held a great veneration for the Eucharist and actively hoped for and promoted a dedicated feast day.

St. Juliana eventually became superioress of the Augustinian nuns of Mont Cornillon. She promoted the feast to Bishop of Liege Robert de Thorete based on a vision she had of the Church as the full moon with one dark spot, the absence of a solemnity celebrating gift of the Eucharist. Bishop de Thorete called a synod, a power held by bishops at the time, to institute the feast in 1246.

The bishop died before the decree of the feast took effect, but St. Juliana had also told the Archdeacon of Liege Jacques Pantaleon of her vision. Bishop Pantaleon would later become Pope Urban IV.

In 1264 the pope made the feast day universal with a papal bull called "Transiturus." The feast faced the risk of being forgotten after the death of Pope Urban IV that year, but Pope Clement V renewed observation of the feast day at the General Council of Vienne in 1311. His successor, Pope John XXII, followed by promoting observance of the feast day, which endured with time.

In the papal bull, Pope Urban IV pointed to key reasons for a feast day centered exclusively on the Eucharist.

While the institution of the Eucharist has always been commemorated on Holy Thursday, the liturgy that day also recalls other important moments of Christ's life. Also, Holy Thursday takes place in what is considered a time for contemplating the Lord's Passion as part of Holy Week in a season of sadness.

"If you are an active Catholic, the Eucharist is the center of your faith experience, so it's great to take the opportunity to step back and just focus on it," Father O'Brien said.

"It makes sense to me that if the greatest truth is who God is, then the greatest source of God in our lives is the Eucharist. So, it just flows well spiritually to me from the Easter Season," he said.

Father O'Brien said of the Eucharist itself that Christ's disciples "only came to understand what this was after his resurrection and the coming of the Holy Spirit."

The procession may not have originally featured as part of the historical celebration, but had caught on in many places, before Popes Martin V and Eugene IV endowed it with indulgences during their respective papacies.

"It's a wonderful thing for us not to just be celebrating within the walls of the church, but to celebrate in the streets of the community," Father O'Brien said.

Father O'Brien said a Eucharistic procession can affirm the reality of the Real Presence for the faithful and present an opportunity to witness to fallen away Catholics or non-Christians.

"There are lots of people in a community like ours who are baptized Catholic, but are not practicing their faith actively now. To witness people who have a Eucharistic faith walking right down the street, that may be a prompt and an invitation to reconsider the reality of the Eucharist and to know that we're all in this together," he said.

At the Corpus Christi procession at St. Patrick's, the newly ordained Father Andrea Filippucci carried the monstrance containing the Blessed Sacrament during the procession. He noticed that some bystanders stopped to denote respect or crossed themselves, as the procession of about 150 people passed by in the wake of the monstrance.

He compared carrying the monstrance to the work of the donkey when Christ enters Jerusalem in the Gospel.

"I felt exactly the same. I was nothing. I was just a donkey carrying Jesus," he said.