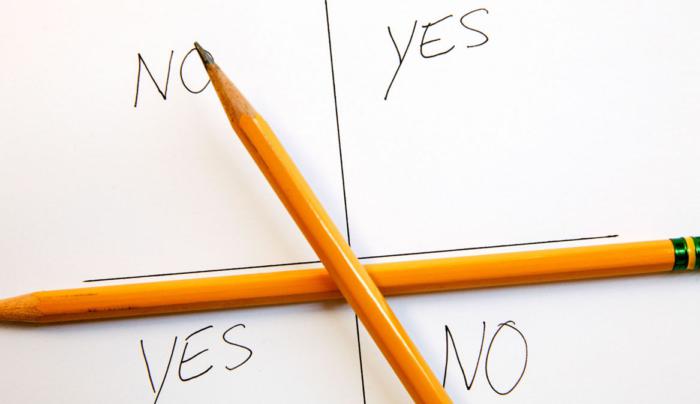 BRAINTREE -- Officials of the Archdiocese of Boston are joining others in cautioning parents and young people about a game being spread through social media centered on young people allegedly contacting the dead or spirits to answer questions.

Like a simplified version of the Ouija board of decades-past, in the "Charlie Charlie Challenge" participants write "yes" and "no" on four quadrants of a piece of paper, balance two pencils intersecting the words in the shape of a cross, and ask questions of an entity called "Charlie." The top pencil then supposedly rotates, with the point indicating the answer to the question.

In differing accounts online, "Charlie" is either the spirit of a child, a deceased accident victim, or even a Mexican demon.

The phenomenon has spread among young people taking photos or videos of themselves playing the game and then posting them on social media.

The hashtag -- a word or group of words indicating a topic on social media -- #CharlieCharlieChallenge spiked on Twitter, May 24, on its way to gathering two million Tweets in a social media frenzy.

In the first days of June, various sources online began explaining the trend as part of a viral marketing campaign associated with an upcoming horror film, but social media entries by the film's promoters seem to have come after the Twitter spike over the Memorial Day weekend.

Services that track social media trends indicate that the phenomenon moved into English-language social media from the Spanish-speaking world through the Dominican Republic. The hashtag spread quickly or "went viral" within days, and reached Father Matt Williams, director of the Faith Formation of Youth and Young Adults, that week.

"A friend of mine forwarded me an article about this topic and how a priest had come out cautioning and even warning young people of the dangers of this and telling them to stay away," Father Williams said.

In response, the Faith Formation of Youth and Young Adults Ministry of the Office for Lifelong Faith Formation and Parish Support posted information about the game on the archdiocesan website, BostonCatholic.org and is also available at The Pilot's online opinion site, Echoes.TheBostonPilot.com.

"We need to equip our parents and our leaders with some tools to be able to have these conversations with our kids," said Father Williams.

Father Williams drafted a series of talking points with details for how catechists, parents and those serving young people in ministry can address the issue with young people, which the website makes available through a link.

"So, what are the dangers here?" Father Williams asked.

"Even if this is a gimmick, you're teaching kids. You're welcoming kids down the road or showing them down the path of divination, and you're planting seeds for the future, which is not a good thing at all. Or, you're going to open up the curiosity for them to start looking into the occult in other kinds of ways, which could find themselves getting into trouble down the road," Father Williams said.

However, Father Williams also addressed the reality of Church teaching on attempts to contact spirits in order to seek knowledge otherwise unavailable to human perception.

"You're starting to open up doors to things that are not meant to be opened. The Devil is real. There's no such thing as Casper the friendly ghost," Father Williams cautioned.

In his talking points, he advised spiritual guidance to young people in a way that affirms the desire to explore the supernatural, but not for supernatural yearnings for power or divination. Father Williams encouraged the affirmation of the desire for the supernatural love of God, which he identified as the purpose for God's creation of humanity in his own image.

"We want to affirm that desire and show them what that's really for, and it's for a relationship with the Most Blessed Trinity," he said.

He said thinking with what he called a "drive thru" mentality encourages people to seek easy answers, like one might seek through divination, and weakens our faith.

"There's the instant gratification. Everyone is mesmerized by, 'Oh is it real? Is it not real?' and that kind of thing, but it really weakens our faith. Going to 'Charlie' is not helping you to walk by faith. It is, in fact, feeding that desire for instant gratification and to have it your way," he said.

He pointed to prayer as an antidote.

He compared prayer to the relationship in a loving marriage, and the desire for control through divination with idolatry.

The "Catechism of the Catholic Church" also provides guidance on divination and magic in paragraphs 2115 through 2117.

In particular, paragraph 2116 addresses fortune-telling and similar practices, saying, "All forms of divination are to be rejected: recourse to Satan or demons, conjuring up the dead or other practices falsely supposed to 'unveil' the future. Consulting horoscopes, astrology, palm reading, interpretation of omens and lots, the phenomena of clairvoyance, and recourse to mediums all conceal a desire for power over time, history, and, in the last analysis, other human beings, as well as a wish to conciliate hidden powers. They contradict the honor, respect, and loving fear that we owe to God alone."