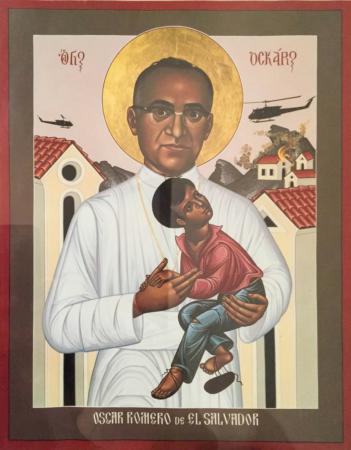 'Jesus talks about his mission of being a messenger of good news to the poor, and that is certainly what Archbishop Romero was, and he paid for it with his life.' Pilot photo/CardinalSeansBlog.org

Thursday (5/28), the consecrated virgins in the archdiocese joined us for our daily Mass at the Pastoral Center and afterwards there was a luncheon and meeting with them. During the lunch, we had a discussion of some of our activities for the Year for Consecrated Life and also the upcoming Jubilee Year for Mercy. They were also able to share some of the activities they are involved in. Also with us at the lunch was Elizabeth Lee from Fall River and Sister Marian Batho, our Delegate for Religious Life in the archdiocese. The vocation of the consecrated virgin is an important one for the Church that has been restored by the Second Vatican Council and we are very blessed to have so many consecrated virgins here in the archdiocese.

That afternoon, we had the annual meeting of the Missionary Society of St. James the Apostle, commonly known simply as The St. James Society, held at their headquarters in St. Stephen's Church in the North End. It was a very positive and hopeful meeting. The director of the society, Father David Costello, was happy to report that there have been a number of new applications for membership by priests who would like to be missionaries in Latin America.

From there, I went to New York to celebrate the ordination for the Capuchin Province of the Sacred Stigmata of St. Francis, which is the New Jersey province of the Capuchins. They had one priestly ordination, a young man by the name of Father Robert Perez. Though it is the New Jersey province, they have a parish in the Bronx and that is where the ordination was held. It has been a very historically important Italian-American parish and today many other immigrant groups are there as well. The parish also has a community of cloistered Capuchin Sisters, who were allowed to attend the ordination as well.

By Trinity Sunday (5/31) I was back in Boston, and I went to Most Holy Redeemer Parish in East Boston for a special Mass of Thanksgiving to celebrate the beatification of Archbishop Romero of San Salvador, which took place on May 23. Archbishop Romero was a personal friend of mine, and so it was a very moving experience. I would have attended his beatification myself if it were not that we had so many very important events taking place here in the archdiocese on Pentecost weekend, including our ordinations to the priesthood. The Salvadoran community turned out in great numbers for the Mass. The church was standing room only and they had screens set up downstairs for the overflow crowd. In my homily, I spoke about the role Archbishop Romero played in his lifetime. Jesus talks about his mission of being a messenger of good news to the poor, and that is certainly what Archbishop Romero was, and he paid for it with his life. Yet, his memory has had a great impact in the Church.... Of course, hundreds of thousands of people attended the ceremony in El Salvador. We were so happy to be able to mark the occasion with the local Salvadoran and Hispanic communities in Boston.

On Wednesday (6/3), we had the groundbreaking at Pope St. John XXIII National Seminary of a new facility that will be their library and communications center. Many alumni of the seminary, members of the board of trustees, and benefactors were present for the occasion. The hope is that the center will be completed by Christmas, and I know it will be a wonderful addition to the seminary. Pope St. John Seminary is flourishing and this is just a further enhancement of the facilities that are required for the wonderful formation of priests that takes place at the seminary, which over the last 50 years has formed almost 800 priests for Boston and the world.