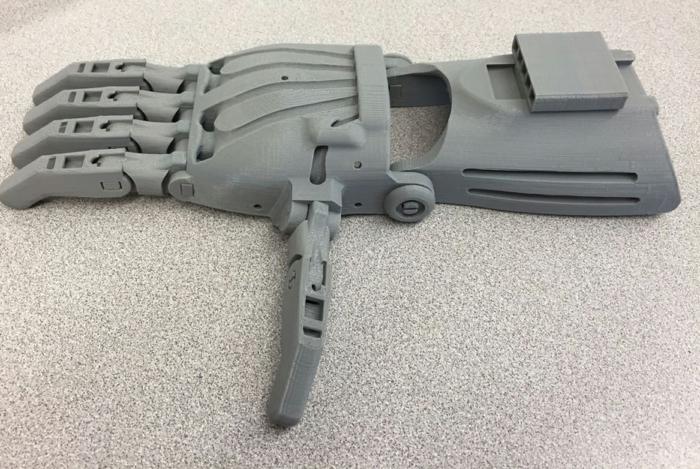 It's not every day a 10-year-old can say he is building a prosthesis. But that's exactly what Ben Weinberg, fourth-grader at Blessed Sacrament School in Walpole, is doing.

Weinberg, together with close to 25 fellow students all in grades 3 through 6, make up the school's 3D Club, a newly formed extracurricular organization created to help students take advantage of the school's recently acquired 3D printer.

According to school principal James Spillman, Blessed Sacrament was looking to purchase a 3D printer as part of a STREAM grant the school was awarded by the Catholic Schools Foundation.

While looking into which printer to purchase, one of the students' families contacted Spillman. A family member worked for MAKERBOT, a New York based company that makes 3D printers. After contacting the company, MAKERBOT donated the printer to the school.

"That was a great blessing for us," Spillman said. "Anyone who watches the 3D printer in action is very intrigued."

At first, students like Weinberg used the printer to recreate famous cathedrals from around the world, Spillman said. But that changed once MAKERBOT introduced Spillman to e-NABLE, an organization that connects people with 3D printers to children in the third world in need of prosthetic hands.

"Our school decided we had to participate in that," Spillman said, noting that the students are not "creating" a prosthesis. Rather they are "learning how to take the plans that e-NABLE has given to us and follow the rules."

According to Spillman, e-NABLE "builds all different types of hands," but the school has been given what e-NABLE calls the "raptor hand" to assemble. E-NABLE supplied them with the videos and resources on how to build the "Raptor hand," and the 3D Club has spent this year learning how to correctly put together.

"Our hope is to actually assemble the hand in the fall," Spillman said.

For Ben Weinberg, the concept of creating a prosthetic hand for a child in the third world to use is "really cool."

"I think that it's great if we can help someone and that we can learn how to make a real hand," the 10-year-old added.

"This is a real-world lesson our students are receiving," chimed Spillman. "Certainly this is something fantastic."