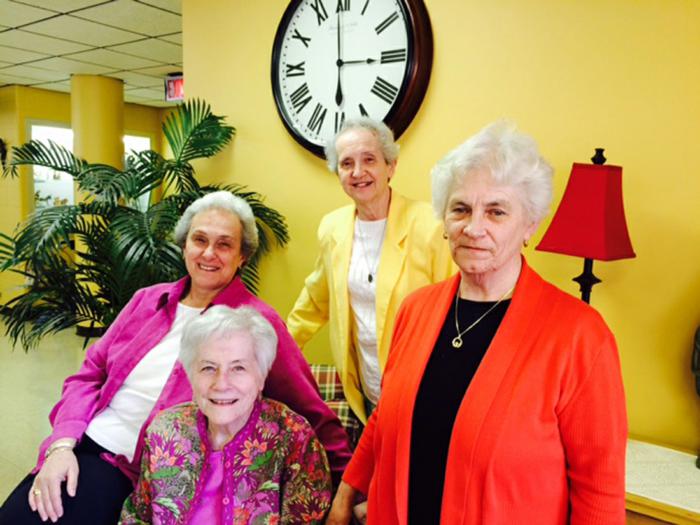 From pre Easter to pre Pentecost, the Resurrection motif of peace and joy has been echoing throughout the corridors of Mount St. Vincent, Wellesley. On March 8, we Sisters of Charity-Halifax celebrated the Jubilarians of 60, 65, 70, and 75 years of consecrated life. On May 1, Sisters Sheila Conley, SC; Kathleen Crowley, SC; Paula Mignone, SC and Cecelia Sacca, SC were feted at a Madonna Hall High Tea, where sisters and friends gathered to extend good wishes and blessings to these Golden Jubilarians for their many years of consecrated life.

What is so notable about our post Vatican II jubilee celebrations is the absence of gifts. Instead, hundreds, perhaps even thousands, of dollars have been donated to the poor -- locally, nationally, even internationally. As widespread as are the monetary gifts, equally widespread were the places where Sister Cecelia Sacca reminded us the Jubilarians had served: Hamilton, Bermuda; Cranbrook, Kelowna, Vancouver, British Columbia; Bani, Las Descubierta, in the Dominican Republic; Dorchester, Lowell, Lynn, Medford, Needham, Roxbury, Salem, West Roxbury in Massachusetts; Edison and Riverton in New Jersey; Bedford, Bridgewater, Dartmouth, Halifax, Lower Sackville Mount Uniacke, Sheet Harbour in Nova Scotia; Belle Harbor, Brooklyn, Richmond Hill in New York; and Renton in Washington.

More importantly, Sister Cecelia recalled the victories of their deceased Band members. How Sister Cathy Corbett had filled in her body the sufferings of Christ, and how, when the priest who was called to anoint the dead body of Sister Elena Kilelea, who served as Chaplain in a Cape Breton prison and was killed in a tragic car accident, remarked, "I felt the aura of God as close as I have never felt before."

So, besides the sandwiches, tea, hot and cold beverages that were served at the Madonna Hall High Tea, more significantly were the hearty blessings of love, joy, perseverance and faithful service bestowed on our Golden Jubilarians. The Easter message, "Peace be with you" was strikingly evident at Mount St. Vincent, Wellesley. Jubilate! Alleluia! Amen!

Sister Martha Westwater, SC is a Sister of Charity of Halifax living in Quincy. For more information about the Sisters check their website: schalifax.ca.