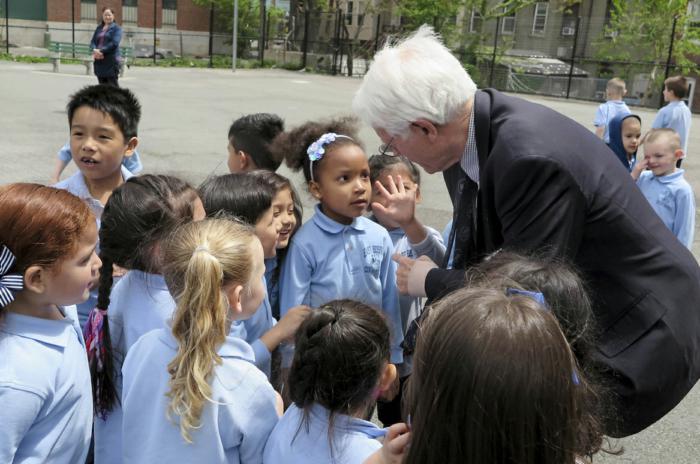 Inner-City Scholarship Fund chairman Peter Lynch speaks with students at East Boston Central Catholic School during the ICSF's annual 'bus tour' May 21. Each year, the ICSF sponsors a tour of a local Catholic school that benefits from the fund, which helps student afford a Catholic education. Among the guests on this year's tour was Former New England Patriots player Andre Tippett. Pilot photo/Donis I. Tracy

Close to 50 men and women, including special guests Andre Tippett, NFL Hall of Famer and former New England Patriot, and Peter Lynch, philanthropist and investment banker, participated in this year's annual bus tour, sponsored by the Inner-City Scholarship Fund (ICSF). The attendees, most of whom are donors to the ICSF, boarded a bus in downtown Boston and were driven to EBCC, where they were treated to a lunch, a brief presentation and a tour of the elementary school.

"This is a great opportunity for you to see where the money actually goes," said Michael Reardon, director of the Catholic Schools Foundation, the organization that oversees the ICSF. According to Reardon, 92 children at the EBCC receive partial scholarships from the ICSF. Most of those children would otherwise not be able to attend Catholic school due to financial hardships, he added.

"You are making a huge difference in their lives," Reardon said.

As guests arrived at the school, children in their uniforms lined the walkway of the school, holding signs welcoming them. The preschool class playing in the adjacent basketball court eagerly cheered as attendees exited the bus.

"Thank you for what you do," they chanted.

Upon entering the school, the guests were taken to the auditorium for the lunch and presentation, where EBCC principal Maryann Manfredonia gave a brief overview of the history of EBCC.

According to Manfredonia, 40 years ago, four Catholic elementary schools in East Boston -- Our Lady of Mount Carmel, Our Lady of the Assumption, Sacred Heart and Most Holy Redeemer schools -- "saw the writing on the wall" and realized they would thrive if they united. These schools all shuttered their doors and joined forces to become EBCC. She noted that the school remains viable thanks to the ICSF's generous contribution.

"We are here because you are here," Manfredonia told the audience during lunch. "On behalf of every school that you support, I give you a heartfelt thank you."

"You are the champions of Catholic education," she continued. "You are the role models of what we teach every day."

Peter Lynch briefly spoke of the importance of supporting the ICSF in order to make Catholic school education available to all children.

"Begging for money for schools like this for the past 25 years has been the best thing I've ever done," Lynch said. He also spoke of the importance of providing scholarships to inner city children in order to help them succeed.

In his remarks, Tippett agreed, saying "Educating our young people is vital."

He spoke of his youth, growing up in Newark, N.J., where "everyone I saw that got the opportunity to go to a Catholic school had the chance to improve their lives."

"The feeling of family and sense of community I feel here are just what the kids need to thrive," he said.

Tippett presented the school four autographed footballs, noting that Robert Kraft, Chairman and CEO of the New England Patriots, is an ardent supporter of the ICSF.

Carmen Monks, financial advisor at Citigroup Global Markets, and a 1979 graduate of EBCC, then spoke, noting that although the school is celebrating its 40th anniversary, it is facing many daunting challenges. A growing number of area charter schools, changing demographics, fewer school-aged children in the neighborhood -- are all threatening the school.

Following lunch, groups of students took the guests on a tour of the pre-K to grade 8 school, during which they had the opportunity to visit individual classrooms and meet the students.

"What I like about the school is that the teachers are really nice and you get a chance to do a lot of really cool things," said fifth-grader Natalia MacPhail.

"I like that I have friends here," chimed second-grader Dante Minacapilli. "I like to play with my friends."