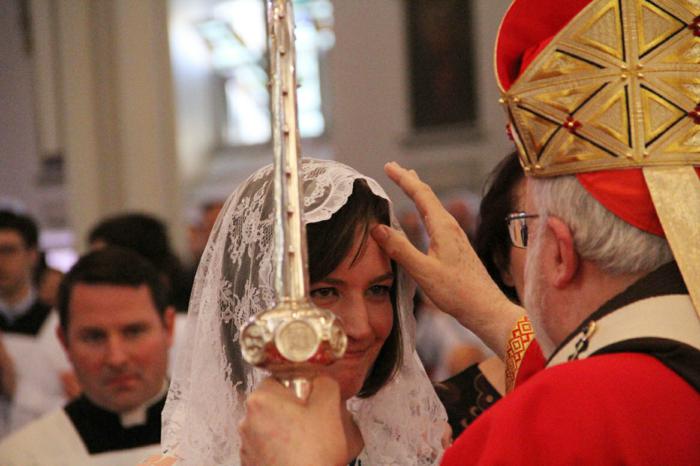 Cardinal Seán P. O'Malley anoints a confirmandi with chrism, May 23, during a Rite of Confirmation at the Cathedral of the Holy Cross. Pilot photo/Christopher Pineo

SOUTH END -- With the participation of members of various ecclesial movements and faith communities, Cardinal Seán P. O'Malley celebrated the Vigil Mass of Pentecost, welcoming to the fullness of the Church 25 new members through the Rite of Confirmation, at the Cathedral of the Holy Cross May 23.

Pentecost, which falls 50 days after Easter, celebrates the day when the Apostles received the Holy Spirit, left their seclusion and began preaching the Gospel. It is sometimes referred to as the birthday of the Church.

"The Holy Spirit comes at Pentecost like the rush of a wild wind. He blows away the dead growth and completely changes the landscape and changes our lives," Cardinal O'Malley said.

"It is truly the birthday of the Church. The roaring wind that betokens the presence of the Spirit is quickly accompanied by the tongues of fire," he said.

Readings and prayers were presented in Portuguese, Luganda, Vietnamese, Italian, and Polish representing the gift the apostles received to reach people despite language barriers, after the Holy Spirit came upon them as depicted at the beginning of the Book of Acts.

"The upper room, after the arrest of the Lord, it is there that they remained isolated for fear of suffering the same fate as Jesus. After Jesus' resurrection their fear is not suddenly expelled; but here at Pentecost, when the Holy Spirit rests upon them, these men emerge fearless and begin to proclaim the good news of the crucified and risen Christ. They were not afraid, because they felt that they were in the hands of a loving God," the cardinal said.

Representatives of the groups present -- which included the Community of Sant' Egidio, the Charismatic Renewal Movement, the Neo-Catechumenal Way, Comunidade Shalom, and Communion and Liberation -- presented multi-lingual readings, songs and prayers at the Mass.

"Each of your movements, apostolates, and ecclesial communities are a special gift that enriches the Church and helps us to grow," Cardinal O'Malley said.

The cardinal noted that he had read letters from each confirmandi expressing their desire to move closer to God through the Church.

"Today, as we celebrate your confirmation, I invite all those who are present to renew our own baptismal vows in the grace and commitment of our own confirmation. May the Holy Spirit continue to enlighten our faith and lead us on the path to a life of faith in joyfully living the Gospel and sharing it with our brothers and sisters," the cardinal said.

The confirmandi and those present renewed their baptismal promises, before partaking in the Eucharist together.

Father Kevin J. O'Leary, rector of the cathedral, spoke for the community in receiving the newly confirmed as members of the Church.

"It is nice, there are a lot of good things happening, so I am grateful for that," Father O'Leary said.

The rector spoke about the community at the Cathedral of the Holy Cross, as the neighborhood and the city become more and more diverse.

Chanel Casseus, a 31-year-old mother of four, joined the community in her confirmation that day.

"I feel extremely happy that I am now confirmed within the Church and showing my kids that Mom did it," she said.

Magalie Casseus, 49, came with her daughter to support her during confirmation.

"I feel very good for her," she said. "She's making a great step and a good step."