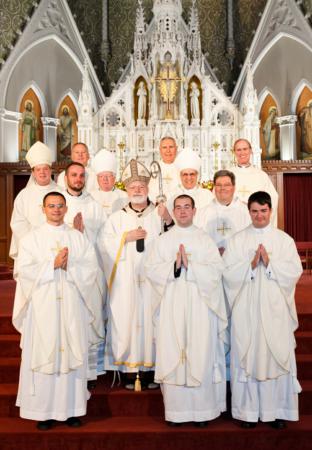 SOUTH END -- Cardinal Seán P. O'Malley ordained five men at the Cathedral of the Holy Cross, May 23, who later shared the thoughts they had during Rite of Ordination to the Order of Presbyter.

"These are going to be our Pentecostal priests, ordained on the Vigil of Pentecost, and slated to celebrate their first Masses on Pentecost -- the birthday of the Church. Each of them is giving the Church a birthday gift -- a blank check," Cardinal O'Malley said in his homily.

"In this case the blank check is their lives, which they are handing over to God for the sake of the Church. They are putting their signatures on the check and letting God fill in the rest," he said.

Cardinal O'Malley conducted the rite that brought the men into the priesthood, from the bishop's chair or cathedra -- a symbol of his apostolic teaching authority passed on from his successors.

As the rite began, each man stood and answered at the call of his name as Msgr. James P. Moroney, rector of St. John's Seminary in Brighton, presented the candidates to the cardinal.

The cardinal elected the men for ordination with the consent of the friends, family and supporters of the candidates to a round of applause. In his homily he spoke about the work each man committed himself to that day.

"We must lead people to Christ. When they know Him and experience His friendship, then they find the strength and the motivation to embrace the Cross of discipleship and the discipline that following Jesus calls for. One of the greatest joys of the priesthood is to be able to tell the people of God of God's abundant and inexhaustible mercy, and to assure them that our God is always ready, even anxious, to forgive us," the cardinal said.

After the Mass, each man spoke with The Pilot about his thoughts during the rite.

Candidates approached the cathedra after the homily and promised obedience to the cardinal and his successors. Each candidate then lay prostrate during the singing of the Litany of the Saints.

"Lying on the floor while the whole Church was praying for us, both on earth and in heaven, was a very powerful moment," Father Stamm said.

The cardinal laid his hands upon each of the men, ordaining them priests with the Prayer of Consecration. Father Cusack afterward said this moment brought with it understanding of the reality of his vocation -- at that moment he became a priest.

"The exact moment when the cardinal laid his hands on my head, that's when the reality of it just really kicked into me," Father Cusack said.

All of the bishops and priests in attendance also laid hands on each man received into the priesthood that day.

"When I stood up after all the priests had laid their hands on my head, and I saw the sea of priests in front of me on the altar, all smiling and beaming at me, it just struck me that this brotherhood that I just joined is absolutely amazing, and they are all welcoming, and want me to be there and to do well with them," Father Lowe said.

After the laying of hands, the newly ordained received the prayer of consecration, investiture with stole and chasuble, and anointing of the hands.

The cardinal handed each of the five new priests a paten and chalice, before they joined him at the altar to concelebrate the Mass. The new priests then joined their brothers to participate in the Communion Rite as priests for the first time.

Father Filippucci said he began to cry when he gave Holy Communion to his family members from Italy.

"I really saw in their faces a reflection of what they were seeing, the miracle of God, what God has done in my life. Many times we don't realize, but when I saw that, when I saw them coming up crying, I just, the floods broke," Father Filippucci said.

Father Ubiparipovic noted the feeling of the power of apostolic succession in the rite and as the cardinal laid hands on him, but he especially recalled the feeling of joy as he distributed the Eucharist to those who had supported him in his years of study and his journey toward the priesthood.

"Just to see so many of my friends and family members who are so faithful, and whose faith will be affected, because they see somebody committing their life to Christ, had at the same time a very powerful impact on me," he said.

Thomas Sullivan, a fourth-year seminarian at St. John's Seminary, spoke about his feelings as he witnessed the men he studied alongside become priests. He used a baseball analogy to describe the feeling of being next in line to accept the vocation.

"I was very happy for my friends. I think they are going to be wonderful priests, and then there is also a bit of nerves involved in knowing that you're in the on-deck circle," he said.