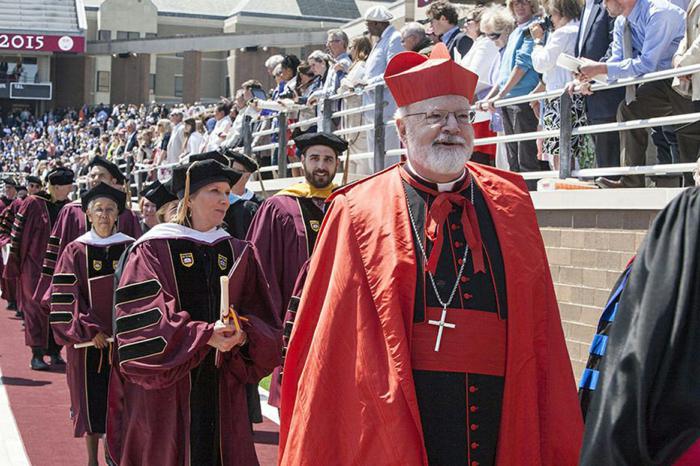 'Monday (5/18), I attended the commencement ceremony at Boston College, where I gave the benediction.' Pilot photo/CardinalSeansBlog.org

Last Thursday (5/14), I celebrated the Boston College High School Baccalaureate Mass at the Cathedral of the Holy Cross. It was a full cathedral, with over 300 graduates and, I would estimate, there were somewhere between 1,500 and 2,000 people at the Mass. BC High has celebrated their Baccalaureate Mass at the cathedral for the last few years and we were very happy to have them there again. The choir from the school performed for us. It was very beautiful. Jonathan Shea, who is Father Joe Raeke's nephew, spoke at the end of Mass. He gave a beautiful testimony of faith.

Saturday (5/16) I went to St. Mary's in Plymouth for the celebration of their 100th anniversary. It was a beautiful celebration and we were joined by two former pastors. The parish has a small but growing Brazilian community, so they have [a] shrine to Our Lady of Aparecida, the Patroness of Brazil. The following day I joined another parish for their anniversary celebration. This time, it was St. John's in Wellesley. They were a chapel before they became a parish, so this year they are celebrating 140 years as a faith community and 125 years as a parish. It is a wonderful parish that has been served faithfully by Father Tom Powers and Sister Evelyn Ronan for over 20 years. Father John Connelly is also in residence there, as is Father Bryan Hehir. It was a very beautiful celebration, and afterwards they had a sort of outdoor fair to continue the festivities.

Sunday afternoon (5/17), I was visited by Father Michael Nolan and members of the Ugandan Catholic Community. They had recently elected a new leadership team for their community and Father Michael brought them by to introduce them to me. There is a very large Ugandan community in the Boston area, and the vast majority of them are Christian -- either Catholic or Anglican. St. Mary's in Waltham is home to a very active community where, for example, they celebrate the Feast of the Ugandan Martyrs every year. In fact, at the conclusion of our gathering, the members of the leadership team sang one of the hymns of the Ugandan Martyrs for me in their native language.

In the evening, I attended the ceremony for the awarding of the Cardinal Medeiros Scholarships at Boston University. The scholarship provides a four-year, full tuition scholarship for graduates of Catholic high schools in the Archdiocese. Since the establishment of the scholarship, hundreds of graduates of our Catholic high schools have been given full scholarships to Boston University. The twelve students honored received scholarships valued at nearly $2.3 million. By the time these students graduate, the University will have enrolled a total of 408 scholars, representing a contribution of over $46 million from Boston University to the greater Boston area and the students of the Archdiocese. ...This is a wonderful program, and a great gift to the students and their families, especially considering the high cost of a college education today.

Just as last week I met with the major superiors of women religious in the archdiocese, on Wednesday I met with the superiors of the men's religious communities. Father Mark O'Connell gave us a wonderful presentation on the lineamenta and the suggestions that came forward for the Synod on the Family, and then we had an opportunity for each of the superiors to speak about the different activities of their communities.

Then, that night, we had the annual senior priest dinner at the Boston College club. It's always a wonderful event that is very much enjoyed by our senior priests who live at Regina Cleri and other places. We are very grateful to Jack Lynch from the BC Club, Jim O'Connor from the Order of Malta and all the other benefactors who make the evening possible... It was all very good fun.