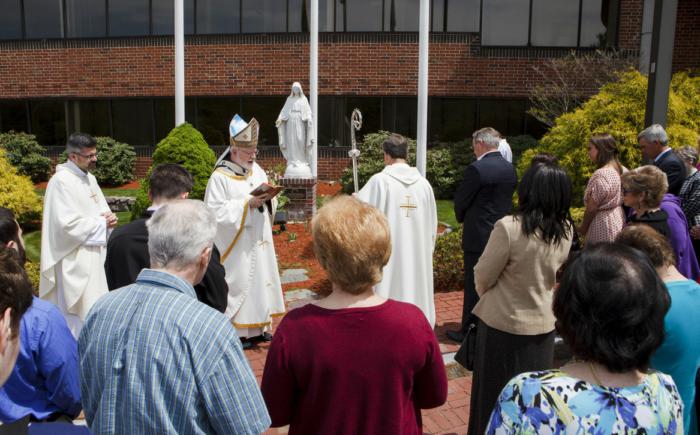 'On Tuesday (5/11), we had a Mass and dedication of our statue of the Blessed Mother outside the Pastoral Center to the late Jack and Mary Shaughnessy.' Pilot photo/CardinalSeansBlog.org

Last Thursday (5/7), I celebrated the annual Catholic Schools Foundation Scholars Mass at the cathedral. This year, the scholars and their families almost fill the cathedral. Afterwards we had a reception. It's always very nice to have a chance to meet the students and their families and it is a way of recognizing their commitment and hard work. We are very grateful to all of those who support the Inner-City Scholarship Fund, which provides the scholarship money for these young men and women and that allows us to make Catholic education available to many who otherwise would not be able to afford it.

On Saturday (5/9), I attended the commencement ceremony at Emmanuel College, where I gave the commencement address and also received an honorary degree. We had a beautiful day for the ceremony. Not only did they give me an honorary degree but they are also naming their ministry department after me. They presented me with a picture of the plaque that will be on the building. I told them I was very honored, because the only thing named after me so far is the Cardinal Seán O'Malley Memorial Speedbump at the Pastoral Center! In my address, using some of the themes of Pope Francis, I spoke about the importance of Catholic education preparing them to be protectors of the gifts and caretakers of creation and of one another. I also spoke of the tradition of the Sisters of Notre Dame at the school, particularly their foundress St. Julia Billiart and Sister Dorothy Stang, who was murdered in Brazil. Emmanuel College has been very successful at facing the challenges that most small Catholic colleges have had to deal with over the last decade. As a result, they are flourishing. We are so grateful to Sister Janet Eisner for all that she does to make the college the success that it is.

Monday (5/10) night the FOCUS campus missionaries who are working at Harvard, MIT and Boston University came together for a dinner at St. Mary's Parish in Waltham. Father Michael Nolan was our very gracious host. During the evening I was able to hear their reflections and stories of what the missionaries have been experiencing during their time here in Boston. We are so grateful for their presence and we know that they reach a great many young people. Of course, Boston has one of the largest populations of 25 to 35-year-olds in the United States. Add to that the hundreds of thousands of university students (who would generally be younger than 25) and it really demonstrates that we have a large young adult population to serve. And, in fact, you only have to go through certain sections of Boston to know this is true. There are places where you are hard-pressed to find anybody under 30 walking on the street. Our young population is a great blessing, but it is also a challenge because that is the demographic that is the most secularized and the least churched. So, we are very grateful to the FOCUS missionaries who have a great capacity to connect with our young people and share with them the joy of the Gospel.

Then, in the afternoon, we met with the major superiors of women religious at the Pastoral Center. We meet once a year to learn about their work and to have a conversation about the Church and issues related to their mission. This year, in relation to the upcoming Synod on the Family, we focused on the vocation and mission of the family in the Church and contemporary world. Father Mark O'Connell, our judicial vicar joined us on this conversation. Of course, we also talked about the ongoing celebration of the Year for Consecrated Life and announced that we will celebrate a Mass closing the year at the cathedral on Nov. 29. The meeting was very well attended and I was happy to see the vitality of the religious congregations of women that are serving our people here in Boston.