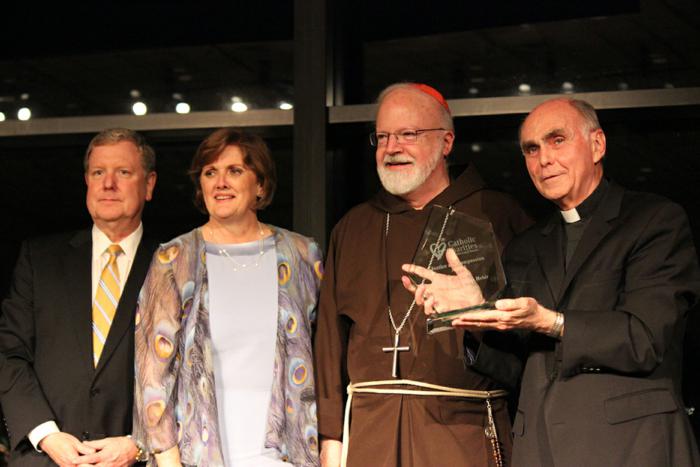 BOSTON -- Catholic Charities of the Archdiocese of Boston raised more than $1.1 million to fund the agency's programs and services that support more than 200,000 people in need throughout Eastern Massachusetts, May 13, at its annual Spring Celebration at the John F. Kennedy Presidential Library in Dorchester.

Mike Sheehan, chief executive officer of The Boston Globe, served as master of ceremonies at an evening that honored the work of Father J. Bryan Hehir, Cabinet Secretary for Health and Social Services of the Archdiocese of Boston, with the 2015 Justice and Compassion Award for his contributions to Catholic Charities. Before assuming his current position with the archdiocese, Father Hehir served as president of Catholic Charities USA from 2001 until 2003.

Cardinal Seán P. O'Malley opened the evening with prayer and remarks. He commended Father Hehir for putting his work as a priest first, even while serving as a staff member on the U.S. Conference of Catholic Bishops, working at Harvard University as Parker Gilbert Montgomery Professor of the Practice of Religion and Public Life, and writing and researching multiple publications on ethics, foreign policy and the role of religion in society.

"I have known him since I was a young priest in Washington and seen up close how he has given his life to serving the little people of the Church, in making himself available to minister the sacraments, say Mass at the prison, and be there for people when they need him," the cardinal said.

Guest speaker E.J. Dionne of The Washington Post, spoke about Father Hehir's accomplishments and contributions to Catholicism through his teaching, research, and policy work.

Dionne noted the intellectual prowess and humility of Father Hehir when he interacts with diplomats, politicians and high-level academics.

"When is it that the very smartest person in the room is also the most genuinely humble person in the room? And imagine, Bryan was on the Harvard faculty; Bryan is a man who knows and is known by the entire power structure of our country and our Church," Dionne said.

"They seldom get to this dinner, or dinners like it, but they are the reason the dinners make sense for they make it possible ... for these people to continue this work," he said.

He noted that The Globe Magazine and the Commonwealth Institute named Rambo to a list of "2014 Top 100 Women-Led Businesses in Massachusetts" earlier in the year.

Father Hehir spoke about the unique opportunities facing the Church in the United States today, as he said the Church holds a place at the periphery of a blossoming immigrant and urban community, but also holds places near and throughout the centers of power in the national scope.

"We originally were a Church at the edge of American society in the 19th century, but from the 19th century through the 20th century Catholics moved from the edge of American society to the center. This room represents that movement. There is no place in American life where Catholics are not represented in a major way. We are at home in the center, but what we must remember is that we're back out at the edge again," he said.

"There is hardly any institution in the country that occupies that strategic intersection of standing at the center and the edge at the same time. But being a center-edge Church carries healthy obligation, for the edge is where the hungry are. The edge is where we feed people in Dorchester, now with 60,000 pounds of food a month. In Dorchester, it used to be 5,000 pounds of food a month. The edge is the place where in this ferocious winter that we have just gone through, Catholic Charities runs out of money for heating oil before the winter begins," he said.

He also noted that the state of the Church creates opportunities between people, and referenced the teaching of Pope Francis regarding a move to the peripheries of society.

After the event, Father Joseph M. White said the encouragement to work from the center to the edge highlighted an opportunity for encounter with Jesus Christ.