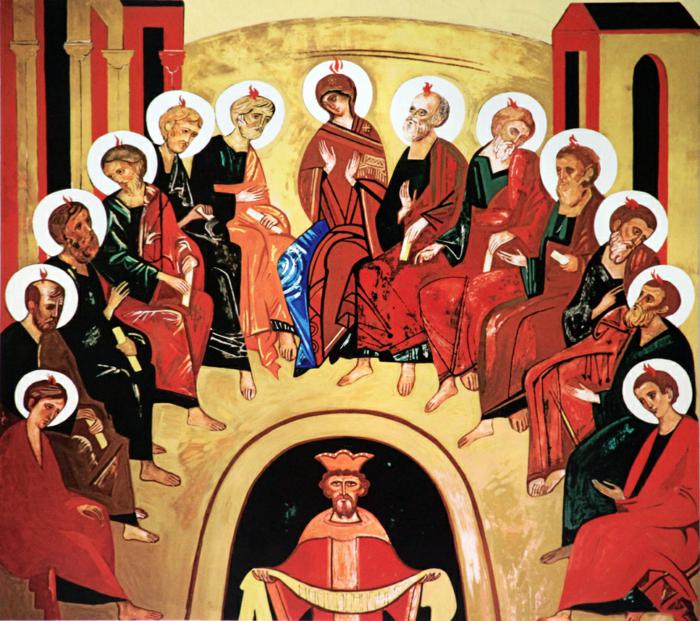 A scene from Pentecost is depicted in artwork at Our Lady of Divine Providence Church in Providenciales, Turks and Caicos Islands. The feast, celebrated May 24 this year, commemorates the Holy Spirit descending upon the apostles 50 days after Christ's resurrection. Pentecost also marks the end of the Easter season. CNS photo/Gregory A. Shemitz

Pentecost is sometimes referred to as the birthday of the Church, but what is it and where does it come from?

The Acts of the Apostles recounts that nine days after the Ascension of Jesus into heaven, the Holy Spirit came down on the Apostles and Mary in the form of tongues of fire, and they began preaching fearlessly to those in the streets.

"This is Pentecost," Father Joseph Briody, professor at St. John's Seminary in Brighton. "This is what we celebrate this Sunday (May 24)."

However, the feast has its roots in Judaism. Fifty days after the Jewish people celebrate Passover, which commemorates their passing from slavery in Egypt into the Promised Land, they celebrate Shavu'ot -- a feast "celebrating the law God gave them on Mount Sinai," Father Briody explained.

He added that "having the Law made the Jewish people a people of God."

It was on this feast of Shavu'ot -- called in Greek "pentekoste hemera" or "fiftieth day" -- that the Holy Spirit descended on the Apostles.

Father Briody stated that, similar to the Easter Vigil, the Church also is invited to celebrate a Pentecost Vigil, which has four additional readings. He also noted that Pentecost is one of only four holy days to have its own Sequence, a special liturgical hymn, which is proclaimed before the Gospel Alleluia.

According to Father Briody, before the Second Vatican Council, Pentecost was celebrated over eight days -- the Octave of Pentecost. In fact, he noted, in several countries throughout the world the day after Pentecost is still observed as a holiday -- Whit Monday. In Eastern Orthodoxy, Whit Monday is also considered a feast day of the Holy Spirit.

In the Church, there is still a special votive Mass of the Holy Spirit which can be celebrated the day after Pentecost, he said.

Pentecost is often called the birthday of the Church is because it was then that the Good News of Christ was first proclaimed to the multitudes beyond those who had followed Christ during his life.

"Even though the Church was at the food of the cross in the persons of the Blessed Mother and John," the apostles were afraid to speak to others about Christ. Instead, from the Ascension of Jesus until Pentecost, they remained together, praying for the Holy Spirit to come to them.

According to Father Briody, these nine days of prayer are considered the first novena in the history of the Church.

"Every novena is based on this first novena," he said.

Pentecost is viewed as the birth of the wider Church because "before the Holy Spirit descended, they were afraid," he said, "but after, they were bold, courageous, willing to speak of Jesus."

"Courage is one of the gifts of the Holy Spirit," continued Father Briody. "They lost their fear, and were able to bear witness to Jesus."

He noted that when the apostles went into the streets to preach, they were understood by everyone.

"At Pentecost, the Holy Spirit is able to undo what had been done in Genesis" when God mixes up the languages of the people because of their attempt to build the Tower of Babel.

"Pentecost reverses that," he said. "Where God separated them and divided them into separate languages, the Holy Spirit now unites them and all can once again understand."

Pentecost is also the last day of the Easter Season, he said. "When the priest gives the final blessing, he will say, 'Go in peace Alleluia, Alleluia,' and that will bring Eastertide to a close."

"The paschal candle will then be taken away and put next to the baptismal font," he said. "And now that we have celebrated Eastertide in all its fullness, we have to go and live out the Paschal mystery."