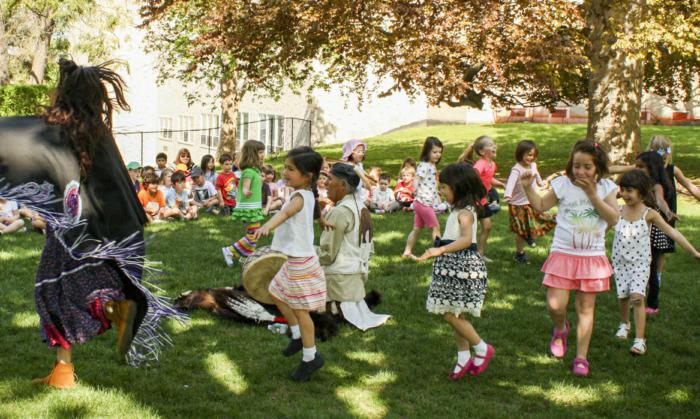 Children at the Walnut Park Montessori School in Newton know that one can never be too young to make a difference in the world.

The school, which teaches children ages 18 months to six, "has a very strong emphasis on peace," according to Nancy Fish, the school's headmaster.

According to Fish, this is particularly visible during "Make a Difference Week," where students participate in a week-long community service project in their classrooms. Some classrooms collect pennies for a charitable organization; others collect food for area food banks.

And these community service projects are geared specifically to the children, she added. Children's books are read that highlight service to others; teachers speak about ways each person can help someone in need.

"Basically, we make it very real to the children, real and to their level by asking them, 'What kinds of things do you want to bring in to help those who don't have what you have?' It's remarkable how much they understand, and how much they are willing and eager to help," Fish said.

Children also get to grow their own food in the school's garden, she continued. Once the food is harvested, students prepare food in their classrooms and leftovers are donated to a local food bank.

Another aspect of the school that widens the children's understanding of the world in which they live is the diversity found in the school. The 150 students that make up the school represent 17 different nationalities and eight different home languages, Fish said.

"Diversity is really celebrated here at Walnut Park," she added. "We are very much a global community."

Students not only learn about each other's cultures, but the school hosts several multi-cultural performances so that the students can "get a big picture of the world we live in."

Founded in 1967 by the Sisters of St. Joseph, the school's mission is to "provide an environment where children are loved and nurtured spiritually as well as socially, cognitively, emotionally and physically," according to the school's website.

In keeping with the American Montessori Society model, students at the school are grouped in multi-age classrooms. Toddlers ages 18 months through three are together in one classroom and children ages four through six learn alongside each other in another. There is currently one toddler classroom and five pre-K through 6 classrooms in the school. Those who graduate from Walnut Park Montessori may choose to continue their education at the affiliated Jackson School also in Newton.

"It's great to see the children develop and grow through the years," Fish said. "When they begin, they get to experience being new, being the youngest. And by the time they are ready to leave our school, they are the oldest ones in the room and they are developing the social and emotional component of themselves."