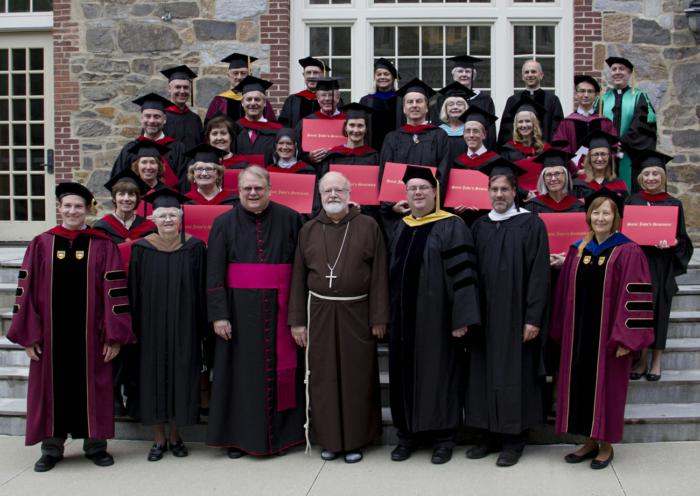 BRIGHTON -- Fifteen graduates of the Theological Institute for The New Evangelization received degrees May 19 in the 2015 class of the Master of Arts in Ministry and Master of Theological Studies program, during a commencement ceremony at St. John's Seminary with Cardinal Seán P. O'Malley and rector Msgr. James P. Moroney.

Sister Marian said that, since being notified of the speech in October, she visited classrooms and involved herself closely with students and faculty at the Theological Institute to get to know them. She noted that the graduates functioned as teachers as well as students throughout her experience.

"Teaching and enlivening every day are essential in the work of evangelization. I know that you are ready," she said.

Julie Basque, who works in pastoral care at St. Luke the Evangelist in Westborough, spoke on behalf of the class of 2015.

"Our learning and our formation here at the Theological Institute is just the beginning. We are life-long learners," Basque said.

Father Christopher O'Connor, president of the Theological institute, gave words of acknowledgement and thanks to the class, faculty, staff, friends and family of the graduates and those who helped prepare the commencement. He also thanked the pastors and priests who supported the graduates at their home parishes and in their spiritual lives.

"Most important is the support of the clergy, many who are here filling our pews this day, especially the pastors. We thank them for encouraging the laity to respond to their baptismal call to holiness," he said.

Cardinal O'Malley closed the evening with prayer and remarks on the mission facing the graduates in their work with the Church.

The cardinal invoked Pope Francis's image of the Church as a field hospital, calling the graduates "our latest batch of orderlies."