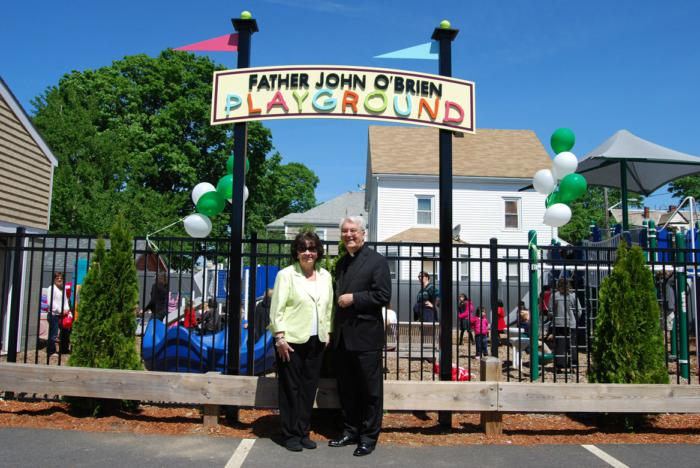 Quincy Catholic Academy has enjoyed tremendous success since it first opened its doors in September 2010. But that doesn't mean that the staffers there are ready to rest on their laurels.

With the school's five-year anniversary swiftly approaching, Principal Cathy Cameron is confident that the school, which educates students in preschool through grade 8, can reach even greater heights.

"We're now on a good track," she said. "I think we can prosper. I think we have a strong, bright future. I really do."

Her confidence is understandable, given the academy's history. The city of Quincy used to have three Catholic schools: Sacred Heart, in North Quincy; Saint Ann, in Wollaston; and Saint Mary, in West Quincy. With each school facing the reality of declining enrollment, it was decided that the Sacred Heart building would be the home of the new Quincy Catholic Academy (a name chosen to "stress the academic excellence," Cameron noted) and the other two buildings would be closed.

Unlike Sacred Heart, the academy is not a parish school. It is a corporation that answers directly to the Archdiocese of Boston, although Father Louis Palmieri -- pastor of the Quincy Catholic Collaborative of Saint Mary, Sacred Heart and Saint Ann Parishes -- chairs its board of directors.

Cameron said that initially, there were minor concerns among some parents that something special would be lost as a result of the consolidation.

"I think people were afraid we were going to lose that 'small Catholic school' feeling, that family feeling. We tried to keep as many of the traditions for all three (schools)," she said, adding that a lot of those traditions were already the same.

But very quickly, the new academy was embraced by all.

"The greatest thing that happened was that the teachers and parents could not have been more excited about the school," said Cameron. Perhaps as a result, blending in those students who had attended Quincy's two other Catholic schools "went much better than I ever thought it would," she added.

Before she was even appointed as principal, Cameron -- a veteran Catholic educator -- served on the committee that selected which teachers from the three schools would end up working at the new academy.

"We ended up with the best of the best," she said. "It's a great staff. I'm really proud of the teachers and staff."

The talented teachers' spirits were buoyed by Cameron's positive leadership upon her arrival, and good things started to happen. Although pre-academy numbers were not available, she said enrollment went from 369 and 368 in the school's first two years to 376, 383 and 390 in the next three.

"Initially the goal was 400 students," she noted, "and we're getting there."

Cameron said the average class has about 18 students -- although one in the 7th grade has as many as 26 -- and she thinks it "would be great" if that number could increase to 20.

Looking beyond those dates, Cameron said the goals for the immediate future, in addition to boosting enrollment, include an increased focus on technology -- the school recently leased 25 new iMacs for its computer lab, and she wants to find a way to integrate such learning into the classrooms -- as well as the school's ELLs (English-language learners) and its advanced students.

Besides Quincy, the students hail from other South Shore communities such as Braintree, Milton and Pembroke, as well as Boston. The school also boasts an eclectic mix of ethnicities.

"We have the most diverse student population," said Cameron.

Recalling an event staged by its Irish step dancing afterschool club that clearly illustrated the academy's ethnic balance, she noted, "I was watching it and thinking, 'This is what we're all about.'"

Another of her favorite memories is from last June, when the school dedicated the Father John O'Brien Playground, which is named for Sacred Heart's previous pastor.

"It was a happy time," recalled Cameron. "It was another step that we made for the kids."

And for the principal, it's the students that really make the challenges of her post worthwhile. Five years into her job, she still enjoys greeting them when they arrive at school; she does it every morning, unless she has a meeting scheduled. On those days when she can't be there to say hello, one of the students will inevitably tell her, "I missed you out there."

"It's my favorite part of the day," she said of the students' arrival. "I love it. Being with the kids is the best part of my job."