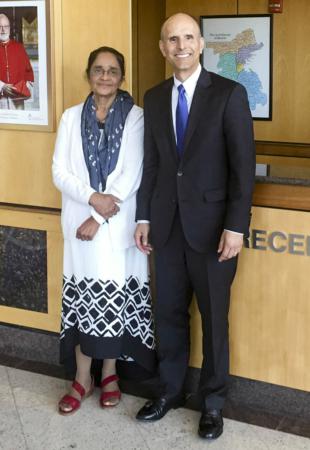 BRAINTREE -- With an increase in the use of abortion medication in recent years some potential mothers have decided to stop the abortion process part-way through, and now have the support of a growing network of doctors and healthcare professionals intent on remaining available around the clock.

Dr. George Delgado, director of Culture of Life Family Health Care in San Diego, Calif., works with a network of doctors called the Abortion Pill Reversal Team to give women who have started an abortion medication process a chance to reverse the process and bring their baby to term.

Delgado spoke with The Pilot, May 7, after a pro-life conference at Holy Cross College in Worcester where he spoke about the relatively new procedure.

"There were lots of people (at the conference) who had never heard of it, even though they were strong pro-life people and strong Catholics," he said.

The conference gave the doctor a chance to spread the word about the treatment of chemical abortion reversal, which is important because a network of healthcare professionals must grow to make the process more easily available to women who choose to continue their pregnancy after starting an abortion medication regimen.

The primary drug used in the chemical abortion process, RU-486, also known as mifepristone, became available in the United States in 2000.

"These days 20 to 25 percent of all abortions are accomplished with mifepristone," Delgado said.

"The mifepristone kills the baby. Misoprostol expels the baby," he said.

It was recently been found that reversal of the process is possible after the time the pregnant woman takes the first pill, but before she takes the second. And the earlier the reversal is attempted, the more likely it is to succeed.

Dr. Delgado explained how this is possible.

He said that that RU-486, or mifepristone, acts by blocking a hormone in the pregnant woman's body called progesterone.

"It (progesterone) is very essential for gestation for pregnancy. Without it, you can't have a successful pregnancy," he said.

"You have all had the experience probably of a false key, a key that went into the lock but didn't turn the lock. That's what the mifepristone, RU-486, does. It fits into the (progesterone) receptor, but it doesn't activate the receptor, so therefore it's a blocker," Delgado said.

He said that, while mifepristone attaches to the receptor about twice as well as progesterone, creating a disadvantage, reversal of the process is possible by giving the pregnant woman extra progesterone, effectively overwhelming the RU-486.

The first person to successfully reverse the effects of mifepristone through the administration of progesterone is Dr. Matt Harrison, who is associate medical director on the Abortion Pill Reversal Team.

Delgado's first experience with chemical abortion reversal came in 2008, when he got a call from a sidewalk counselor working in Texas. A woman she had counseled had changed her mind about her chemical abortion, so the counselor contacted Delgado for help.

"I used progesterone a lot in my practice, because I am trained in something called NaProTechnology," he said. NaProTechnology stands for Natural Procreative Technology, one use of which is to save babies during potential miscarriages by supplementing progesterone.

"I had studied how mifepristone works and I knew it was a progesterone receptor blocker. So, I theorized, 'Well, we have these two keys competing for the lock. One key, though, stays in twice as long as the other,'" he said.

He developed a protocol and collaborated with another doctor. The process worked, and the small network of doctors helped six patients thereafter.

He and Dr. Mary L. Davenport co-authored an article in the peer-reviewed journal Annals of Pharmacotherapy. As more people heard about the process, more people contacted the doctors. With the clock ticking in each case, developing a network of available doctors throughout the country became a priority. The Abortion Pill Reversal Team began coming together.

"Now, we have had 91 births of women who have reversed the mifepristone, another 75 are pregnant. No major birth defects," he said.

There have been cases of babies born with what is called a "port wine stain," a mark or marks comparable to a birth mark. He said the success rate on reversals has been about 60 percent.

Through the network, women seeking to reverse an abortion within 72 hours of taking the first pill in the process can contact the practice -- 24 hours a day, seven days a week -- on their hotline at 877-558-0333. Their website at www.abortionpillreversal.com encourages interested women to make contact even if 72 hours has passed.

"We want to be there for anybody that wants us," Delgado said.

He said many private insurance plans cover the abortion reversal pill treatment, but pregnancy resource centers can help with the cost if the doctor cannot provide the treatment at no charge. He said his organization pledges to subsidize progesterone for anyone who cannot afford it.

Dr. Helen T. Jackson, a Brookline obstetrician and gynecologist and former commissioner of the Massachusetts Commission for the Status of Women, works with Delgado and is connected with the network and has also treated patients using progesterone. She said building relationships with other doctors in the area has become a top priority for the future, but when a call comes in, top priority becomes the rapport with the patient.

"We have to take into consideration we are dealing with a woman in a crisis, so you have to get to know her. I'm a total stranger to her, so you have to build that trust," she said.