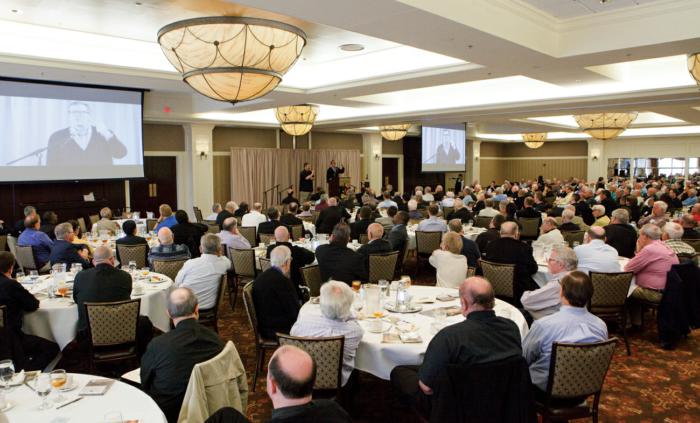 Priests fill the ballroom of the Four Points Sheraton in Norwood for the May 6 gathering. Pilot photo/Gregory L. Tracy

NORWOOD -- Speakers at the annual priest convocation spoke about the challenging nature of the priesthood in current times, May 6, at Four Points by Sheraton in Norwood.

In his remarks, Father O'Connell also said that, in a sense, he wanted to introduce the priests of Boston to Father Barron.

Father O'Connell spoke about how priests make themselves available to the people they serve and face the challenging realities of the priesthood regularly, often to the sound of a certain phrase.

"Father, could you come down? Someone needs to see a priest," he said.

He said that the priests of the Archdiocese of Boston had faced the sex abuse crisis, scandals and personal hardship of recent years, but had grown stronger for it.

"So, Robert Barron, I am so honored today to show you who we really are, not the elite, not the insular, not the unsuspecting priests we used to be, but Cardinal Seán's men -- smaller, but faithful servants of God 'til the end, helping him rebuild the Church. Because when God asked us to come down, we, we said yes," Father O'Connell said.

Father Barron said he had originally planned to speak about his series "Priest Prophet King," but instead gave the priests a DVD of the program and spoke about three spiritual paths for a journey of renewal.

"I think you'll find that all three of these are all through the Bible. They are in all the great spiritual masters in different ways. Path one -- you find the center. Path two -- you know that you're a sinner. Path three -- you realize your life is not about you," he said.

First he spoke about the path by which a person finds the center of their spiritual life and grace breaks through into their life -- like in Isaiah 6:1, when the prophet responded to the call of God in the temple, in "the year King Uzziah died."

He said grace broke through into his life when as a freshman at a Dominican high school outside Chicago, he listened as a Dominican friar laid out one of Thomas Aquinas' arguments for God's existence.

"This was complete news to me that you could think about God in a deeply serious intellectual way. Now I was 14 years old, what did I know?" he asked.

For a student who would go on to earn multiple degrees in Catholic studies, write several books, and run a media apostolate dedicated to the new evangelization, the lesson became an earth-shaking and definitive moment -- one that Father Barron attributed directly to his presence with the priests at the convocation.

"For some reason, that for me was the year that King Uzziah died. That's when I got the vision, when grace invaded my life," he said.

He repeatedly urged the priests to recall that moment in their own lives, either during the convocation or in prayer later. He said sometimes the center comes to you itself, like when Jesus climbed into Peter's boat on the Sea of Galilee.

He said once the center presents itself, the second path becomes obvious.

"The center has burst into your life and now wants to draw everything magnetically around it. Good. But in light of this center that's precisely when we know we are sinners," Father Barron said.

He compared the awareness of sin with the light on a windshield while driving.

"When you're driving at night away from direct light, you can actually see pretty well, right? I'm doing fine, but then the next morning you drive your car into the rising sun, and now it's just opaque," he said.

"It's when the soul is turned toward the light that it becomes more, not less, aware of its sin," he said.

He noted that sometimes the second path calls one to really deeply consider the nature of their own sin, to go down into the depths on a quest to rise up.

"Find the center. Know you're a sinner. Thirdly, realize your life is not about you," Father Barron said.

He said in both the case of Isaiah and Peter, the Lord purifies the sinner for a greater destiny, both having acknowledged openly their own sinful nature in their encounter with God, before God sends each on a mission.

"See brothers, we're all involved in apostolic spirituality. Diocesan priests, ours is an apostolate. "Apostolian" means to send. We have been sent by our bishop. We have been sent on mission. It's very important, I think, for us to get onto path number three," he said.

Cardinal O'Malley closed the convocation with a joke that segued into a remark on the importance of discipline and fraternity in the life of a priest.

"We know that here in Boston there is no clerical narcissism, laziness, self-pity, or high-maintenance personalities," he said, as the priests laughed.

"But if there were," he continued, "a real conversion is the only solution, and that conversion is possible only by having a deep friendship with Christ and with our brother priests. The example, encouragement and support that we give each other is crucial in molding our hearts into an icon for the Good Shepherd."

Father Peter F. DeFazio, a priest ordained in 2015 who serves at St. James and St. John the Baptist in Haverhill, noted a synergy between the talks given by Father Barron and Father O'Connell.

"My take away from all that is that, boy, somehow both Mark O'Connell and Robert Barron, both of these great priests, have managed to give a great description of what I think all the priests in the room probably have experienced, but as a newly ordained -- myself having only been ordained now just under one year, about 11 months -- my experience already relates to that," he said.

Father James M. Broderick, a retired priest in residence at Immaculate Conception in Newburyport ordained 55 years ago, said Father O'Connell gave an excellent description of the life of a priest and the recovery of the archdiocese in recent years.

"He obviously faced up to all the negatives, and then I thought very wonderfully brought out all of the positives and the recovery that has been affected under the present cardinal. I would applaud him for giving a really true reflection on what is today's priesthood," Father Broderick said.